Yet Angela Garretson may have a harder runoff election than expected as the Hillside councilwoman confronts the strangest alliance in New Jersey politics.

The 2013 mayor’s election started out as a three-way race among Hillside Mayor Joe Menza, Councilman Jorge Batista and Garretson.

When Garretson and Menza made the Dec. 3rd runoff, most political observers figured Batista would back Garretson over Menza. Republican Gov. Chris Christie is aligned with the independent Menza, while Batista had the support of veteran Democratic Party leader Charlotte DeFilippo, the former Union County Chairwoman now reduced to her local party chairmanship.

Surely, DeFilippo’s mayoral hopeful would not support the Christie-endorsed candidate.

DeFilippo has a long history of grinding her teeth over Christie’s policies.

But that’s exactly what happened.

A source said DeFilippo worries about the empowerment of a Democrat in her hometown who lacks the brand of the Hillside Democratic Party chair, and the potential alliances that could arise beyond town limits with that empowerment.

So Batista threw in with Menza, leaving Garretson and her allies to fall back to Elizabeth and the support of state Sen. Ray Lesniak (D-20), who has his own reasons for getting involved.

In addition to his alliance with Christie, Menza has close ties to the Elizabeth Board of Education, Lesniak’s dreaded political foes.

Concerned about the gathering forces of Menza and the EBOE, Lesniak has gone all in with Garretson, according to a source close to the fast developing battle lines; a move that pits the senator against his old ally DeFilippo.

Alert to the Menza-Batista alliance, U.S. Rep. Donald Payne, Jr. (D-10) has redoubled his own efforts to get Garretson elected. Payne wants this win, according to a source close to the contest. A victory in Hillside by the rookie congressman would make a statement about his commitment to securing power in his congressional district.

For Lesniak, a Garretson win would hobble the Menza-EBOE effect, while further wobbling DeFilippo.

As for Menza, the incumbent independent mayor now no longer has simply the identification of a pugnacious Republican governor, but of his mayoral opponent who had the support of the local Democratic Committee and the famously combative DeFilippo.

The local party chairman said Batista’s on his own.

“I absolutely deny supporting Menza,” she said. “If Jorge Batista endorses Menza, he does it without the support of the Democratic Party.” 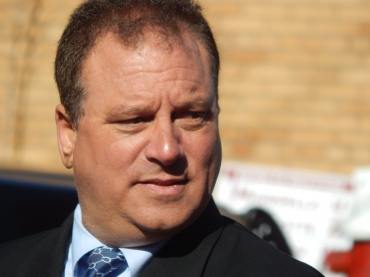