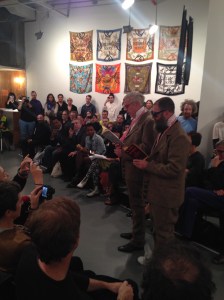 Holmqvist and Goldsmith. (Photos by The New York Observer)

The fifth edition of Performa, New York’s performance art biennial, is in full swing right now, which means there are ample opportunities just about every night to see art types engaged in some fairly unusual behavior. On Monday night, curator Matthew Higgs could be found at the West Village alternative space that he directs, White Columns, sporting a yellow safety vest emblazoned on its back with the visage of Karl Marx. He was helping to stage a fashion show by the artist Rainer Ganahl called “Comme des Marxistes.”

“Mic check” members of the densely packed runway audience echoed, as if they were at an Occupy Wall Street rally. (Hermès scarves printed with the words “Hermès Marx” hung from the walls like political banners.)

The first set of clothing to hit the runway was Mr. Ganahl’s youth line. Audience members announced it with slogans. “Pre-K. I go, you don’t!” they declared. “I have a nanny, you have a TV!” “I go private, you go public!” And then the child models came out, wearing impressive, brightly colored felt outfits emblazoned with lines of propaganda and styled after Comme des Garçons’s fall 2012 line. 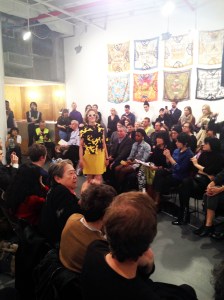 Adult models followed, outfitted in necklaces bearing Marx’s silhouette and dresses resembling Richard Serra’s early rubber sculptures, Malevich paintings (“Malevich likes peasants,” a giddy Mr. Ganahl shouted) and late Blinky Palermo works. The clothes horses included art adviser Thea Westreich and omnipresent writer Linda Yablonsky, who both really got into it, and artists Amanda Friedman, Laura Hunt and Peter Fend, who walked as he held aloft the day’s New York Post, its cover featuring soon-to-be-mayor Bill de Blasio next to a hammer and sickle. (It was for a story about his “secret Cold War trip” to the USSR.)

“There is only one Karl!” Mr. Higgs declared at one point, leading not to the appearance of fashion god Karl Lagerfeld but someone almost as good: the Swedish poet and artist Karl Holmqvist, nattily attired in a wool suit, tall collar and pink tie. He read aloud from one of his books while standing alongside former MoMA poet laureate Kenneth Goldsmith, who was identically attired. (Their suit jackets had “Karl” sewn onto them.)

“The great thing about fashion is that it’s not that super important,” Mr. Holmqvist said. “You can experiment a bit and find out along the way what works best.” Mr. Goldsmith read from The Communist Manifesto about how the bourgeoisie “has transformed the doctor, the lawyer, the priest, the poet, the man of science into its paid wage-laborers.” 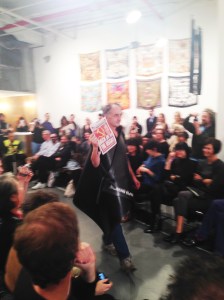 Chants and lines came out one after another and included a particularly attractive top made of interlocking hammers and sickles in yellow and black felt. As the adults took their turns, the youth brigade emerged in civilian clothes, enjoying M&Ms for their labor as they sat on the edge of the runway. They joined together in one human mic. “Drugs! “Marx sex work!” “Human traffic!” “Poverty!” “I’m saying what they’re saying,” one young boy explained to those around him.

Like any good Marxist fashion show, there was blunt talk about money. As Mr. Ganahl thanked his comrades, he ran down his expenses. “The felt cost something like $15,000,” he told the room. White Columns had provided $10,000, the Austrian Cultural Forum $1,500. “I still owe about $25,000,” he said, continuing to thank all of the designers, artists, curators and critics who had assisted him. “I’m sure I’m forgetting many, many more people.”

Someone called something to Mr. Ganahl. “Yes! Oh, the models, yeah!” he said. “All the models, all the unpaid models I have to thank also. Thank you so much!” 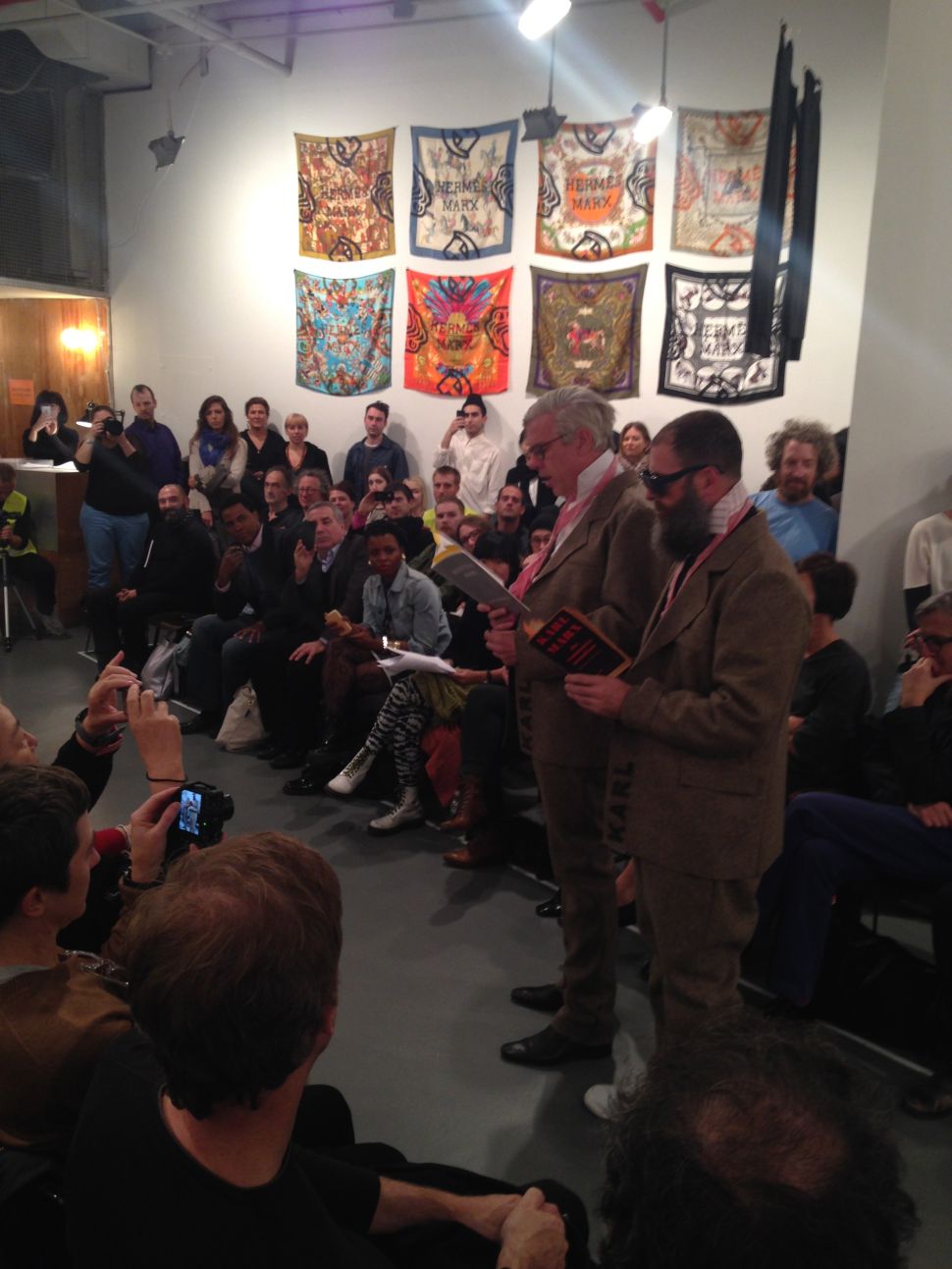