The most highly anticipated dance event of the fall was Alexei Ratmansky’s staging of The Tempest for ABT. In recent years he’s been our most satisfying choreographer; Shakespeare’s play—his final statement—is unutterably beautiful; and there’s wonderful incidental music for it by Sibelius. What’s more, Ratmanksy has finally traded in (I hope permanently) those Euro-trendy designers he’s used in the past and turned to the experienced and brilliant Santo Loquasto for his set and costumes. The result may not be everything I hoped for, but it comes close: This is a Tempest to savor.

Ratmansky’s most startling departure from the norm is his reimagining of the exiled Duke of Milan, Prospero, the motor of the drama, as a young(ish) and virile dramatic figure rather than the usual elderly magus. It couldn’t be done for the play—the plot doesn’t really work with a young Prospero—but it’s fine for the ballet, since it makes possible a less static leading character than Shakespeare’s grave savant. Marcelo Gomes is both moving and sexy in this role, although there’s no one for him to be sexy with. Except, perhaps, his gentle servant Ariel, thrillingly performed by Daniil Simkin, who is just as androgynous, just as not-of-this-world, as Ariel is meant to be. He’s impossibly thin in his tight, white unitard, his bizarre look crowned by blazing red spiky hair, and Ratmansky ingeniously exploits his aptitude for airborne movement while providing him with the opportunity for the most moving passage in the ballet, his farewell to his master when Prospero frees him from his servitude. This role justifies Simkin’s place in the company.

The one serious flaw in Ratmansky’s conception is his failure to create a Caliban who acts as a sufficiently powerful counterforce to Ariel, the subhuman as opposed to the suprahuman. In Shakespeare, Caliban’s relation to Prospero is as important, as meaningful, as Ariel’s, but not here. This Caliban barely has anything to do except look scruffy and roll around on the ground; he’s hardly malignant, he hardly matters, and we’re not prepared for the emotional ending when he’s left alone on the island, abandoned by the master he hates. Alas, instead of giving us a large menacing creature, Ratmanksy has cast the superb Herman Cornejo—small and lively, imposing in his virtuosity rather than his person—in a role that in no way exploits or acknowledges his great natural talents. Without a Prospero-Caliban relationship to balance the Prospero-Ariel one, The Tempest loses much of its resonance.

Everything else is ingenious and appropriate. The Miranda of Sarah Lane—at last coming into her own—and the Ferdinand of the exquisite Joseph Gorak are exactly right, and they’ve been given a lovely pas de deux that reflects the famous speech of Miranda’s on first seeing Ferdinand: “O brave new world that has such people in’t.” Roman Zhurbin is particularly moving as King Alonso, both when he learns that Ferdinand, his son, is missing, and then again when Ferdinand is restored to him. The Tempest, after all, like Shakespeare’s other late romance-comedies The Winter’s Tale, Cymbeline and Pericles, is a play about forgiveness and reconciliation. Ratmansky gets this just right. As for the comic relief, the drunken Trinculo and Stephano, they’re no more tedious here than they are in the original.

Loquasto has done a first-rate job with the décor. There’s a big shipwrecked boat that serves many functions as it’s moved about and adjusted to the needs of the plot, and the costumes are handsome and serviceable, although I found those for “Chorus of the Winds” over-elaborate with their vibrant shades of turquoise and their extravagant head pieces—they distract from the inventiveness of the choreography. But that’s a minor complaint to bring against Ratmansky’s major achievement—a Tempest that rings true as both an homage to Shakespeare and an accomplishment in itself.

This season’s opening night gala began with a radiant performance of Theme and Variations, which Balanchine created for ABT in 1947 and which remains the most important work the company has ever commissioned. It’s famous as a template of classicism, demanding the clearest demonstration of ballet technique: The dancers have no place to hide. The original lead couple were Alicia Alonso and Igor Youskevitch, two paragons of strength and style, and since then such technically magnificent ballerinas as Gelsey Kirkland and Kyra Nichols have brought to it the perfection it requires. There’s no one at City Ballet today with the qualities of grandeur, strength and command it demands, but ABT has Gillian Murphy, and we’re the grateful beneficiaries. Her performance last Wednesday was both towering and luminous. The technical difficulties presented no problems for her, as we’ve come to expect, but beyond that, the musicianship, the flow, the ease were ravishing.

This was Balanchine as he is meant to be. Murphy’s partner, the less experienced James Whiteside, handled himself honorably—the infamous series of double air turns to the knee were clean (enough), and he was generally accomplished. He isn’t really, however, the right partner for Murphy: Their disparity in experience and breadth of expression is evident, and she is better shown off by a partner with a grander physique. But if she felt under-partnered, you wouldn’t have known it from her demeanor or her performance. Like Kyra Nichols, she’s an Apollonian dancer, a true Balanchine dancer, and a living treasure. What should have been the most anticipated dance event of the season was the revival of Twyla Tharp’s Bach Partita, an absolutely stunning ballet, first seen in 1983 and in mothballs ever since. Is ABT crazy? This is the finest classical ballet since Balanchine’s death, which also took place in 1983. A coincidence—perhaps. Tharp’s response to Bach is in the glorious spirit of Balanchine’s Concerto Barocco: This is joyous, almost jazzy Bach, uplifting without being sententious, endlessly inventive without being fussy, light-hearted yet at times piercing. From the first moment to the last—and it’s a long piece—Tharp here does what Balanchine does: She follows the rules while making them her own. The result is total exhilaration.

Bach Partita is big. There are three principal couples, 14 demi-soloists and 16 in the corps, and they’re all stretched to the limit—what a gift to a company of artistically ambitious dancers! First among almost equals is—no surprise—Gillian Murphy, with her inimitable aplomb and staggering technique. Watch her toss off a quadruple turn or balance effortlessly on her toe—she’s a paradigm of cool excitement, and she’s set off beautifully by the stalwart and supple Marcelo Gomes. If only he had been her partner in Theme and Variations.

The beautiful Polina Semionova has the clarity and allure Tharp demands for her role, and James Whiteside is a more suitable partner for her than he was for Murphy: He’s an eager, capable dancer, but he’s still a work in progress. As for the third ballerina, Stella Abrera, Tharp has provided her with a career-making role. She’s been on the second level of ABT casting for far too long; here, she’s dynamic, glamorous, expansive; she’d be stealing the show except that everyone is stealing the show. And her partner, Calvin Royal III, with the tremendous reach of his legs and arms and his happy spirit, is another attention-grabber. He needs polish, but he’s on his way.

The demi-soloists include many of the company’s important dancers, from Misty Copeland, Yuriko Kajiya and Luciana Paris to Craig Salstein, Blaine Hoven and Joseph Gorak, and they’re all out there carrying the Tharpian ball. (The girls have a particularly interesting challenge: At one point, they switch costumes, then switch back.) Again, Santo Loquasto is the tactful and satisfying costume designer, and Jennifer Tipton’s lighting is as always perfection.

There’s so much going on in this work that you want to see it again right away (at least with this cast). Although it’s full to bursting with invention, nothing gets in the way of anything else; it’s a lesson in lucidity. And it leaves me regretting that Tharp didn’t push herself further, or wasn’t pushed further, in this direction. But at least this major work has at long last been resurrected, and the audience gave it a real and heartfelt ovation—you can always tell the difference. I’m happy for her, I’m happy for ABT, and I’m happy for us.

And let us remark on the pleasure of seeing the company back at the Koch Theater after an absence of 37 years. The City Center is too small for it, the Met is too big for it, but the Koch is just right! And Twyla is ABT’s Goldilocks. 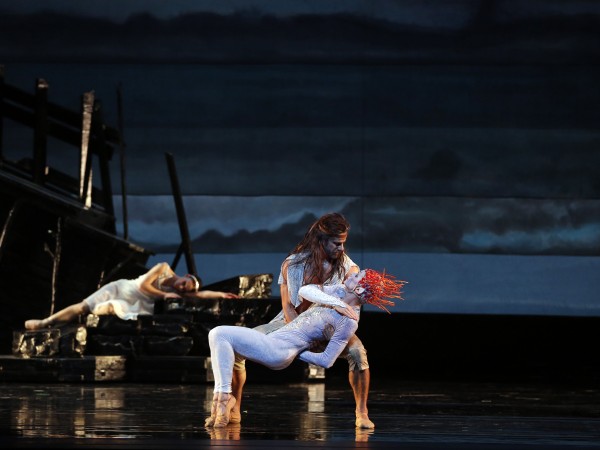 Filed Under: Entertainment, Dance, Dance, ABT