New York Times metro editor Wendell Jamieson said he was “surprised they took such a personal swipe” after reading yesterday’s editorial in the Daily News, which slammed the Times for not promptly covering the story of racial profiling at Macy’s and Barneys that the tabloid has been pushing since last week.

“Arthur Browne [editor of the Daily News’s editorial page] is an old friend. He’s one of the best editors I’ve ever worked for. He hired me at the News,” said Mr. Jamieson, who used to work for the Daily News. “We’ve covered the story in the way I’m sure he would have if he was in my shoes.”

Mr. Jamieson jokingly added that he hoped that Mr. Browne had been on vacation or was having an off day.

Just as he did in Margaret Sullivan’s public editor column earlier this week, Mr. Jamieson defended the Times’s decision not to cover the racial profiling story until October 29, and said the Times would have waited until then, regardless of Ms. Sullivan’s investigation.

“We wanted our own reporting to contribute to the story, we didn’t want to write what others have written,” he said. “The Attorney General launched an investigation. That changes the story. There was a news break, and we got it, and we credited the Daily News. And somehow, on all of planet Earth, that’s what they want to use their editorial stack for—attacking me?”

Still, Mr. Jamieson maintained that he loves the Daily News, and said he wasn’t actually offended by the rather scathing editorial.

“I guess this comes with the territory of being the metro editor,” Mr. Jamieson, who took over the post in May, said. “I guess it’s a badge of honor.” 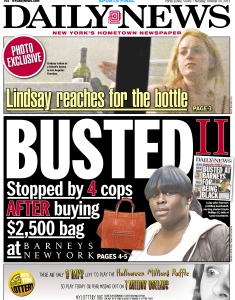