Natasha Leggero stepped onto the stage at Caroline’s last Friday, a blasé look on her face, cradling a Veuve Clicquot Champagne bucket and puffing on an electronic cigarette. Swaddled in fur, she pointed to the white pelt she was wearing and said, “Don’t worry; this is faux.” She removed that coat, revealing a second fur stole. “But this one’s a dead fox.”

Next, she extolled the virtues of the e-cig—“so new they haven’t even tested it yet”—and explained why she’s single: “I’ve never met a man whose shit I want half of.”

This is typical banter for Ms. Leggero, who usually starts her set by establishing her character as a heartless high-society lady who speaks in an affected voice about diamonds and furs. It’s all a perfect set-up for round after round of biting social commentary she then launches into, as she tackles reality TV, society’s lack of marriageable thirtysomething men and the crappier parts of American culture.

The L.A.-based comedian lived in New York City for five years while getting an acting degree from Stella Adler Conservatory, where, she says in her act, she “learned how to be a working actor in the 17th century,” acquiring such indispensable skills as liquid-U pronunciation and fencing.

She then earned a degree in theater criticism from Hunter College and “was really into it,” she told the Transom after her set. “And then I moved to L.A., and I’m using my critical thinking skills I used to use on Brecht to talk about the Kardashians.”

When working as a judge for Last Comic Standing in 2010, Ms. Leggero got to observe the differences between L.A. and New York comics firsthand. “In New York, the bad comics were better,” she said. “In L.A., people had a little more unique voice in general. The people in New York just knew how to crush harder, even if they were bad. You have to be a hustler. I feel like New Yorkers are a different species.”

The difficulty of existing in New York may be what gives the city’s comics their manic edge, she said. “You walk out the door, and it’s like trying to walk through tall grass in a field that hasn’t been mowed but smells like garbage juice,” she said. “But everywhere you go, hilarious things are happening. The butcher will be funnier than a lot of comics you see in L.A. at open mics, because they live in this chaos.”

Her targets have changed since she first started doing stand-up 11 years ago, Ms. Leggero said. Now that she’s seeing some success, she thinks twice about teasing dim Rite Aid workers, setting her sights instead on reproductive rights issues and overreaching corporations.

“I was in survival mode, trying to get enough money for a taco and some earrings,” she said of her earlier self. “You change, society changes, and you have to evolve.”

And technology, of course, is changing the stand-up game, too. “When I first started comedy, I used to check my email at a video store. I didn’t have a computer.” Now, the medium requires a constant output of material via Twitter, YouTube, podcasts and, of course, live shows.

“Instead of putting [an idea] in a spiral notebook, I just tweet it and forget about it,” she said with a laugh. “I give it to everyone else on the Internet.”

She also has a new YouTube series called Tubbin’ With Tash. It’s a talk show that takes place in her hot tub. She mostly interviews other comedians. “It’s like Bill Maher meets Baywatch,” she explained.

Where’d she get the idea? “I was just stoned one night. I thought if I got a hot tub and used it for work, I could write it off,” she said, proving she still has a touch of the NYC hustler in her. 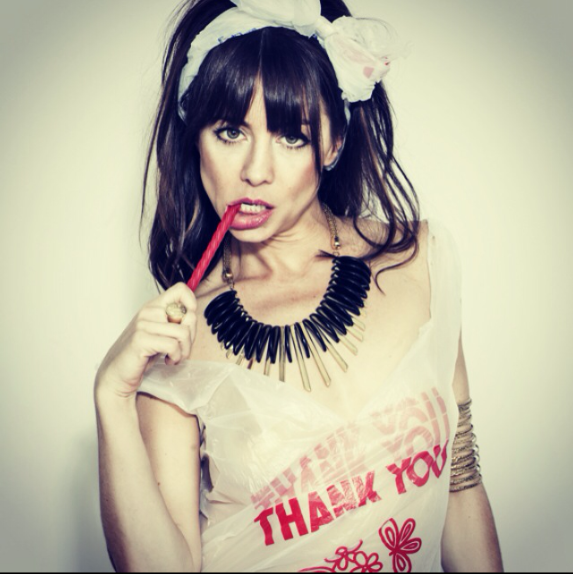