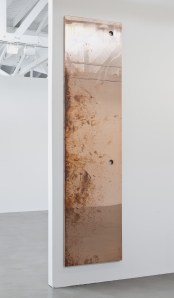 Ever since Walead Beshty parted with his longtime New York gallery, Wallspace, last year, rumors have abounded about where he would end up, with the names of no fewer than three different Chelsea shops floating around at various points. However, an answer has finally arrived. Petzel will announce today that it has taken on the Los Angeles-based artist.

Mr. Beshty will also be represented by Capitain Petzel, the Berlin-based gallery run by Friedrich Petzel in partnership with Köln dealer Gisela Capitain. Mr. Beshty will have a solo show at the Berlin space next November; no word yet on a solo outing at Petzel in New York.

Mr. Beshty is known for lusciously colored, often large-scale abstract photograms, which he makes in a dark room by exposing photographic paper to light according to a predetermined set of rules, as well as shatter-proof glass sculptures that are shipped by FedEx (rather than via art-transport specialists), gradually accruing cracks and splinters as they circulate. The glass boxes and their almost identically sized cardboard containers are displayed together.

“My works look to how images are produced, but specially based upon how the material reacts,” the artist said in an interview with Museum of Modern Art Associate Curator Eva Respini, who included him the 2009 edition of MoMA’s annual “New Photography” show. “There’s a generative material relationship between the material and the image that comes up.”

Mr. Beshty, who is also repped by Thomas Dane in London, Regen Projects in L.A. and Galerie Rodolphe Janssen in Brussels, has had three one-person shows in New York, at Wallspace in 2004, 2006 and 2009, and was included in the 2006 and 2008 California Biennials (at the Orange County Museum of Art, in Newport Beach, Calif.), the 2008 Whitney Biennial, the 2009 Tate Triennial in London and the 2011 Montréal Biennale.

A 2002 Yale MFA Graduate, Mr. Beshty has had solo museum exhibitions at Beijing’s Ullens Center for Contemporary Art (in 2011), Washington, D.C.’s Hirshhorn Museum and Sculpture Garden (2009), L.A.’s Hammer Museum (2006) and PS1 (2004). If you make it to Dallas by Dec. 16, you can also catch his solo show at that city’s Power Station contemporary art venue.