We were all young somewhere once, and my place was Schiller’s Liquor Bar. It was 2003 when Keith McNally’s proto bobo faux-brasserie opened in a former pharmacy on the Lower East Side. I was barely 21, full of piss and vinegar, high on cocaine and shot through with piercings. Already a few years deep in New York, I had bought into the promise of the late-night ticker-tape self-parade but hadn’t yet realized by morning it would all be litter. In the honeysuckle glow of a Schiller’s booth, anything was possible.

I had fallen in with a gang of hangers-on, strung-out hipsters and passersby who constituted the personal collection of Dagny Mendelsohn, a professional restaurant manager and amateur character horder. We were a cohort of jesters, pesterers and inchoate talent. “All of us,” as Luc Sante wrote about the same neighborhood in a different time, “were in that stage of youth where your star may not have yet arisen but your moment is the only one on the clock.”

Nearly every night for a year, we’d gather at Schiller’s, holding court over garlic shrimp and frozen margaritas, each looking at our own clock face. Derek Blasberg, then just a chubby kid from St. Louis but well on his way to becoming society arm candy, was the rumpus king of our petit Versailles. He was popular, charming and sadistic. You were always one clever put-down from exile with him, so my memories of that time are larded with terror.

Feeling old and bored, I recently looked up every restaurant advertisement in a New York magazine from 1983. Only one—Raoul’s—is still extant. So solid at the time, so many others, like Le Petit Cheval, Jack’s Epicure and Kaplan’s Delicatessen, have all evaporated. How silly, I thought, that we only recognize history as something gone. We forget a dying thing, like zebra-walled Gino’s, Jackie’s Fifth Amendment or my Parkinson-shook grandfather, until it’s dead. Then it’s gone, and we rend our garments and flagellate ourselves for our inconstancy. But what if we went back before it was too late? I should call Papa Frank, I thought, and I should revisit Schiller’s.

And so, after a decade, I returned.

Schiller’s on a Friday night in 2013 is 95 percent of what Schiller’s on a Friday night in 2003 was: still packed, tables so close they look like they’re humping, clamor on tile, stereo pumping. The lights were always expertly dimmed, in inverse accordance to the youth and attractiveness of the crowd. (On the night I visit, the lights are extremely low.) The jowly man hitting on a pair of girls at the bar was a little older and looked a bit more like Mitt Romney than I remember. And the girls on which he’s hitting were psych majors, not fashion designers, and they looked boring, not bored-looking. But essentially, the years have flown through Schiller’s like through a mill. The topography of cool is intact, and anyway, half a percentage point attrition over a 10-year span is but an angel’s share.

Now as then, whatever comes out of the kitchen are theater flats, sketched sets for the real show. Schiller’s has always been about the scene. But Sartre didn’t frequent Le Deux Magots for the cassoulet either. The secret of Schiller’s is that it goes for base hits. It’s a single, sometimes a double, never a triple and so far from a home run sluggers play a different sport. What Mr. McNally has learned is restaurants you have to believe in never survive. Schiller’s is a restaurant for the happy agnostic. Whether it has excellent food isn’t the right question. Whether its mediocre food is executed excellently, however, is fair game.

There were a few transcendent moments over the years: the sizzle of the garlic shrimp as their skillet arrives, the steak frites with its little ramekin of au poivre sauce, the fortuitous sloughing off of the cheeseburger’s cheese onto neighboring french fries. (One could, in fact, build elaborate dream palaces out of the french fries at Schiller’s.) Among the lesser angels was the Atlantic salmon, accompanied by a mustard dill sauce, and the berries, which at $8 seemed debauched even in my most hedonistic days.

Since Shane McBride took over a few months ago, he has imbued the menu with a more aggressive seasonality, but the changes are mostly cosmetic. The salmon ($21) is accompanied by caramelized fennel and eggplant puree. There’s an entire roasted cauliflower ($16) for vegans and, of course, a kale salad ($13), because it wouldn’t be a restaurant in New York City if it didn’t have a kale salad. As for the staples—the moules ($19.50), steak frites ($25), garlic shrimp ($13), burger ($17) and chicken pot pie ($18)—he has left them alone. “I call them the Untouchables,” he said from the bowels of Balthazar, whose bakery menu he also oversees.

Also untouched, though I would wager not unmolested, are the waitresses. Ours, a toothsome antipodean, wore her shirt shoulderless and had Bette Davis eyes. Our relationship began to degrade when my cheeseburger arrived with a salad instead of fries. “Sorry,” she shrugged, “fry machine’s broken.” We ordered the nachos to compensate and figured since they were Schiller’s Nachos ($9.50) they would be remarkable. They weren’t. The dry, joyless chips circled a bowl of forgettable hot sauce like sad denizens of Flatlandia at their own wake. They wore a tonsure of melted cheese, as ill-fitting as a used car salesman’s wig, and had all the character of a pop song with none of the hooks.

“Nachos aren’t cutting it,” I told our waitress when she reappeared. But she just pulled her shirt over her shoulder and drifted away like a haughty vapor. We never saw her again.

Unfortunately, the same apathy found its way to the plate. The cauliflower arrived like a biopsied brain and tasted much the same. The deviled eggs were cold and sloppy ($4). Perhaps I was soured by the lack of fries, but even the cheeseburger was dry and flavorless. The rotisserie chicken ($21) was adequately moist but also largely bereft of any identifying characteristics. The salmon’s disparate flavors—fennel, eggplant, olives—may have been seasonal, but they did not comprise a successful dish. Not even the berries, which I once thought so delicious, held up. A decade later, I realized they’re just strawberries and a dollop of sugar-y whipped cream. Youth had made me a berry-loving ninny.

The steak frites, a simple Creekstone Farms hanger steak with a spot-on crust, has only gotten better with age. Meat has a tendency to do that. Oh, and those errant fries—when the fry machine’s not broken, they still belong in the potato hall of fame.

But a restaurant can’t run on nostalgia and fries alone. Thankfully, Schiller’s hasn’t quite gotten to be that bad yet. Maybe, in fact, it hasn’t gotten worse. Perhaps I’m just grumpy. I am older now and full of bile. The cocaine’s gone, replaced with endless recitations of Blueberries for Sal, and I guess I’m a little bitter that the moment I was waiting for—mine— went from being any minute now to who knows when.

But even if one accepts Schiller’s as a stage, the food as the set and the people as the players, each element must work with a minimum level of competency to keep the lights on. In fact, this might be even more important as Schiller’s ages, wades deeper into a restaurant’s dotage. For people age and buildings wear, and you can only turn the lights down so low for so many years, until they just go out. 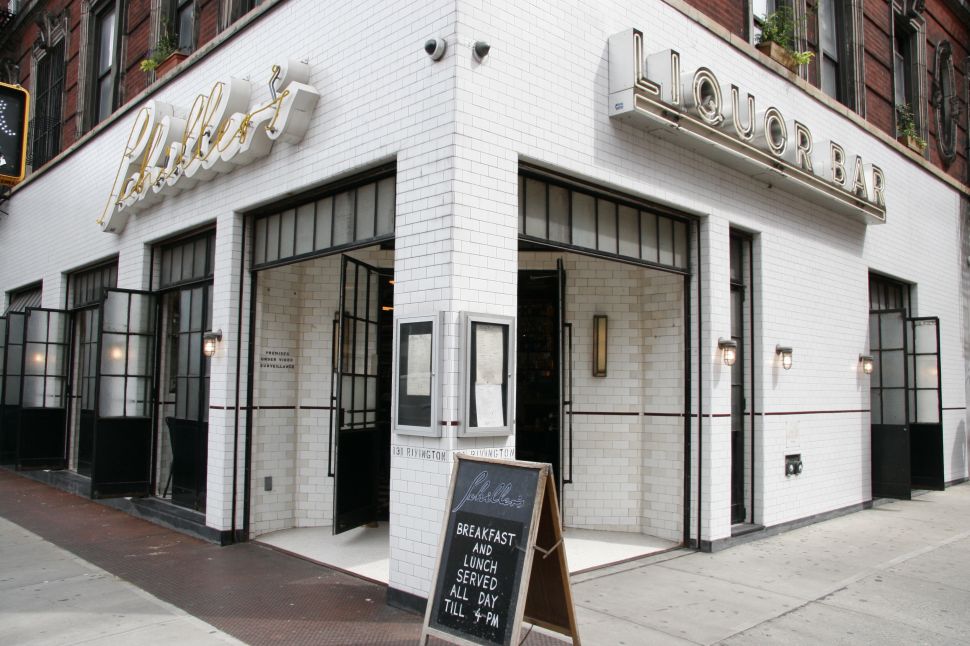