Jeff Greenfield’s If Kennedy Lived: The First and Second Terms of President John F. Kennedy: An Alternate History is, as is clear from the title, a bit of speculative history. Everyone—especially this year, as we mark the 50th anniversary of the assassination of the 35th president—knows that Kennedy died in Dallas in 1963. What this book presupposes is…maybe he didn’t?

With literally thousands of books devoted to the Kennedy presidency and assassination, it’s hard to claim definitively that If Kennedy Lived is the silliest. Even if you could, one must consider the countless other cultural products the devilishly handsome and tragically doomed chief executive has inspired: an Oliver Stone movie starring Kevin Costner as Jim Garrison, the only man to ever prosecute anyone in connection with the assassination (JFK); quasi-fictional portraits of Lee Harvey Oswald by Don DeLillo and Norman Mailer; a Canadian miniseries starring Katie Holmes as Jackie Kennedy; a new Roger Stone book that claims LBJ murdered the president; the last line in the Nicolas Cage-Sean Connery movie The Rock. (Cage, playing Dr. Stanley Goodspeed, the FBI’s top chemical weapons specialist, to his wife: “Honey, uh, you wanna know who really killed JFK?”)

The oversaturation is perhaps why the 50th anniversary feels like an anticlimax. There has been so much research done already, so many archives combed through by Senate aides and lone obsessives alike, so much written and filmed and said. And still, 50 years later, it seems quite possible that there will never be a definitive answer to the most basic question: Who killed JFK?

Polls consistently find that between 60 and 80 percent of Americans don’t believe that Oswald acted alone. In Howard P. Willens’s History Will Prove Us Right, the authoritative title is borrowed from Chief Justice Earl Warren, who headed up the first, best-known and most widely criticized investigation. (Warren reportedly urged his subordinates, “Be patient; history will prove that we are right.”) Mr. Willens, who was on the commission as part of a three-person supervisory staff, recalls agreeing to appear on a talk show on a Guam radio station early on a weekday morning. This was around the 30th anniversary of the assassination, and Mr. Willens thought the location and time would ensure few callers. Instead, he “saw the switchboard light up immediately with calls from listeners as soon as the host mentioned the topic of the day.” He ended up taking questions “from people on the beach, in their offices, in their cars and in cafés having coffee with friends. Many of them were familiar with the details of the commission’s report and demanded explanations of what I regarded as quite minor points.”

These “minor points” are even now being called into question by fresh revelations. Earlier this month, an NPR story examined lingering inconsistencies in the official record. Even Vincent Bugliosi’s Reclaiming History, published in 2007—a 1,600-page book (that comes with an additional 1,000 pages of notes), 20 years in the making, which claims to prove Oswald acted alone by process of elimination—still couldn’t convince a majority of Americans. Maybe it’s possible to question the assassination’s most basic facts. For instance: Everyone knows Kennedy died in Dallas. The only option we haven’t explored is…maybe he didn’t?

John F. Kennedy made the transition from historical figure to pop culture artifact decades ago. Many point to the interview Jackie Kennedy gave to Theodore White the weekend after her husband’s death as the origin of the Kennedy myth. She said, “There will be great presidents again, but there will never be another Camelot.” But the gears of that machine were churning before Kennedy was even elected. The Kennedy narrative—the story presented to the country about a young man who was active, funny and brilliant, a Pulitzer Prize-winning author as well as a devoted husband and father—was, from the beginning, just that: a narrative, a story.

We now know that Kennedy had Addison’s disease, that he was given last rites in 1954 after spinal fusion surgery, that he certainly had many affairs and almost certainly had a relationship with Marilyn Monroe. But it’s at least in part the enduring success of Kennedy as king of Camelot (as much as the confusing facts on the ground in the immediate wake of the assassination) that has made it so difficult for so many to believe that Oswald was the lone gunman. Oswald is, to quote Mr. Greenfield channeling a fictional Bobby Kennedy, whose brother has survived an assassination attempt, “a single insignificant twerp of a man.” And JFK was larger than life.

The morning he was killed, the president turned to his wife and quipped, “You know, we’re heading into nut country.” Oswald, in addition to being too small, was not even the right kind of nut—a poor, self-educated, left-leaning kook who couldn’t hold down a job in a city of rich, white racists who were furious with the president.

The city that emerges in Bill Minutaglio and Steven L. Davis’s Dallas 1963, a portrait of the Texas municipality in the early ’60s, is intolerant and isolationist. In October of that year, Ambassador Adlai Stevenson, leaving a United Nations Day celebration at which he had been the featured speaker, was confronted by protesters, including “Cora Lacy Frederickson, the wife of a Dallas insurance executive.” Ms. Frederickson slammed Stevenson in the forehead with the placard she was carrying. Later, she claimed she never meant to hit Stevenson. Instead, she insisted, “I was pushed from behind by a Negro.” Video evidence proved this unequivocally false. In this company, Oswald’s every appearance in the book, which tracks his movements too, comes as a surprise; he seems out of place.

This basic dissonance is fodder for conspiracy theorists, and there are plenty of improbable coincidences and plot holes to reinforce it. In History Will Prove Us Right, we learn, to highlight just one example, that FBI Agent James Hosty destroyed a note Oswald delivered to the FBI field office in November 1963, which read, according to Mr. Hosty, “If you have anything you want to learn about me, come talk to me directly. If you don’t, cease bothering my wife; I will take appropriate action and report this to the proper authorities.” Or, according to the FBI receptionist who received the note, “Let this be a warning. I will blow up the FBI and the Dallas Police Department if you don’t stop bothering my wife.”

This is the evidence of a conspiracy, or it demonstrates how trivial Oswald seemed, even at the time, or it’s yet another example of bureaucratic incompetence and the institutional instinct of self-preservation, of a piece with Mr. Willens’s discovery “that several of the agents assigned to the motorcade had violated the service’s regulations by drinking alcoholic beverages the night before the motorcade.”

Mr. Willens’s book is a chaos of these kinds of details, occasionally enlivened by personal tidbits almost charming in their clumsy irrelevance. (Before meeting with J. Lee Rankin, the Warren Commission’s general counsel, he gets an “overdue haircut.”) Mr. Willens is disorderly not because his claims are presented in a disorganized fashion, but because they do not build a compelling story. If Mr. Willens’s account of the commission’s investigation more or less won me over on the single-bullet theory, in part, it’s because the amount of information overwhelms into submission. It’s impossible to tell what, if anything, has been left out or even misleadingly presented. I was not so much convinced by Mr. Willens as I was exhausted by him.

It’s impossible to eliminate all doubt, to prove definitively that something did not happen. Proving that Oswald shot and killed the president does not prove he acted alone. And in lieu of a good reason for why he would have acted at all, there is this far more memorable scene: Kevin Costner, in a court room in New Orleans, showing a jury the most memorable frames of Abraham Zapruder’s film of the assassination, the most famous home movie of all time. As the president’s head recoils, Costner repeats, in an erratic Southern accent: “Back and to the left. Back and to the left.”

That memory is not likely to be replaced by Mr. Greenfield’s two-term president.  (Rain forced the motorcade to use a bubble top.) The problem here is the project itself, which provides an answer to a question that’s barely worth asking. Skimming the book to see how Mr. Greenfield maneuvers Kennedy through civil rights (a bill dies in Congress in ’64, but Kennedy manages to sign a voting rights act in his second term) and Vietnam (he withdraws U.S. forces), there is the occasional unexpected twist (Kennedy is almost brought down by a scandal involving sex and LSD) and the odd historical Easter egg (Kennedy running not the “Daisy” but the “Nuclear Kitchen” ad against Barry Goldwater). More often what stands out is the aplomb with which Mr. Greenfield abuses ellipses and manufactures quotes.

The narrative of history becomes visible—if it becomes visible at all—only in retrospect. No one writing the speculative history If Kennedy Died in 1960 could have predicted Oswald, and the fact that even with the benefit of hindsight most explanations for the death of the president still don’t make sense is either proof that we don’t know the real story—that there was a conspiracy the details of which have not yet come to light—or, and this seems, with the passage of time, increasingly likely, that there really isn’t one. 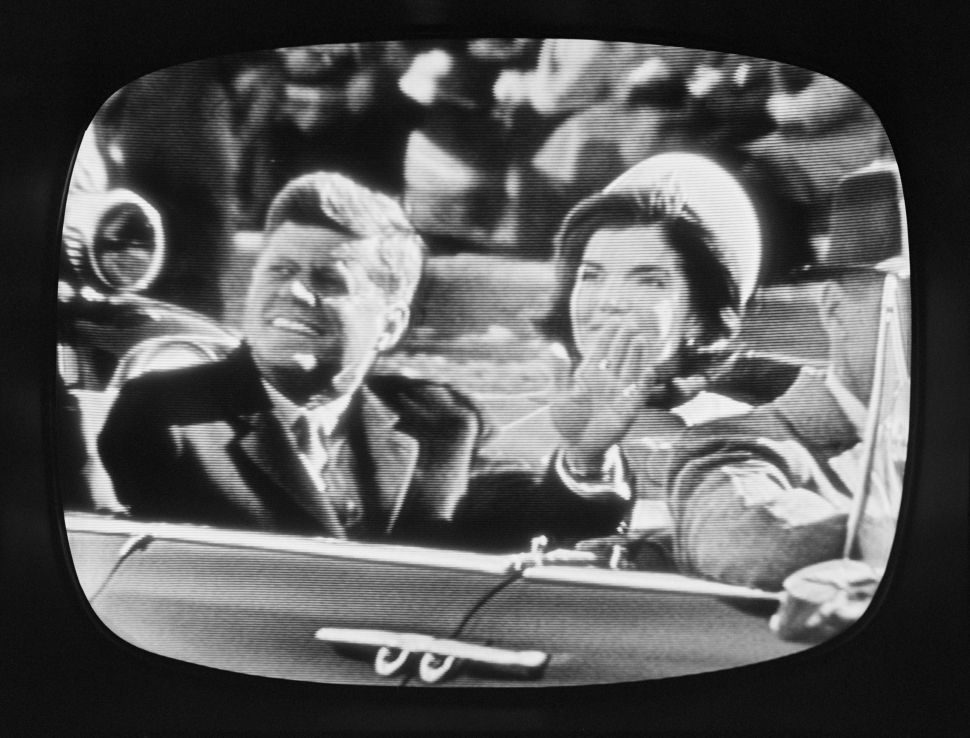