“We’re distilling our own moonshine in bronze-casted douche bags,” artist Marianne Vitale called over her shoulder as she strode out of the room, carrying one of the unwieldy items in question. About a dozen metal sculptures, their snaky tubes twisting up toward the heavens, were resting atop a century-old wooden bar in the back room of Ms. Vitale’s Long Island City studio. It was exactly two weeks before tonight’s premiere of The Missing Book of Spurs, her Performa biennial commission, and she was working on the set with her assistant. The sculptures didn’t belong there, Ms. Vitale decided, and so she moved the hefty things to a table in the adjacent workshop, a maze of saws and salvaged lumber. She dubbed the arrangement “a clusterfuck of douche bags.” Not quite an exaltation of larks, but it had a certain ring to it.

Performa describes The Missing Book of Spurs, a loosely narrative phantasmagoria set in a saloon, as “a continuation of Vitale’s sculptural inquiry into frontier history, visible in her series of burned bridges, bullet-ridden outhouses, false fronts, grave markers and most recently railroad track intersections.” Ms. Vitale, who is loath to spout theory about her work let alone explain it, doesn’t quite agree.

“That’s maybe not even the case,” she said, regarding the widespread assumption that her work addresses the American West. “That’s what people like to say about it. People have their interpretation of what an artist could be making, but it doesn’t mean it has anything to do with some theory or some preconceived idea, especially a production like this. It changes every day, every fucking minute.”

That much was clear watching Ms. Vitale and Cole Mohr, her lanky, tattooed assistant, work through ideas in the cavernous studio, where the performance will run through Nov. 23. Ms. Vitale paced around in Texan cowboy boots, her long, tangled hair trailing behind her. She hoisted up a heavy-looking leather saddle to cover her head like a strange, ceremonial mask and flipped through a big book on the history of magic, landing on structures she might want to build. The scratched, scuffed-up old bar, which Ms. Vitale found on eBay, fit right into the lumber-strewn studio with its piles of animal skins and books bearing titles like Tales of the Wild West and Saving the Buffalo. 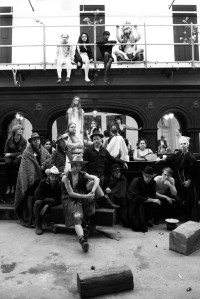 “A lot of an after-party,” corrected Mr. Mohr, who plays a cowboy. “Four nights in a row.”

Ms. Vitale got the Performa commission a year ago, but has been busy staging exhibitions of her formidable sculptures in Austria, Austin and New York, where she shows with Zach Feuer gallery. She’s participated in two previous Performa biennials, most recently broadcasting a radio show. Despite her track record, she seemed a bit conflicted about making performance art, calling it “a very scary thing.” One of her collaborators went a bit further.

Ms. Vitale ran through the show’s raucous soundtrack, blasting “the whore song,” “the horse song” and “the bar fight song.” She pulled her turtleneck up over the bottom of her face, clasping her hands as if in prayer, and rocked along to a death-metal number. She broke into a gallop, cavorting around the studio before crouching down in the middle of the room, somehow managing to smoke a cigarette, play a drum and shake a strip of bells all at the same time.

“I love Performa,” she said. “You can do anything.”

“We’ll have our normal champagne brunch at 3:30 p.m., but instead of getting wasted like we do every other Saturday, let’s keep it contained,” said Ms. Vitale. She was addressing her cast on a recent sunny Saturday morning. It was one of their final rehearsals, and the studio was caught in a state of semi-suspended animation: half-dressed performers wandered around in cowboy hats and tattered dresses drinking kale-banana smoothies. Ms. Vitale’s makeup artist was 40 minutes late, but that ended up seeming pretty punctual when wardrobe rolled in a couple of hours behind schedule.

The roughly 20 cast members are something of an extended family, many of them longtime friends and collaborators like Todd Colby and Walter Gambini. Some are newer. “Those two guys just wandered in last week and started watching the rehearsal,” said one young man who plays a dead cowboy, gesturing to a couple of new additions. The run-through felt a bit like a school play: haphazard, incoherent fun.

“I still don’t know exactly what to think of this,” said Mr. Gambini, a slight man with thinning hair. “I haven’t quite wrapped my hands around it.” Soon Mr. Colby was pounding on the bar, his cue to go on. A few cowboys led Mr. Gambini, arrayed in soiled white long johns, onstage before dropping dead. Mr. Gambini delivered an off-the-cuff soliloquy while dragging chains that gave him a ghostly Jacob Marley vibe. 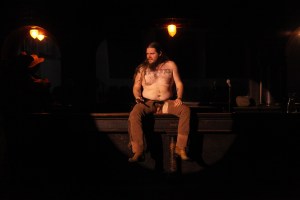 In a later scene, two people playing American Indians, one in a feather headdress, crept onstage. One whooped and played a drum, the other shook rattles, and soon they were doing a conga line with a burly, bearded guy wearing ass-less chaps.

Asked about that uncomfortable moment, Ms. Vitale parroted our question back to the room. “‘What’s the story behind this scene?’ There’s no story behind any of this!” she exclaimed, adding, with a laugh, “I say to the press.” Ms. Vitale speaks openly about her contentious relationship with writers, at least ones interested in her artwork. Earlier, she mentioned one journalist who she felt portrayed her as foul-mouthed, in advance of her show “What I Need to Do is Lighten the Fuck Up About a Lot of Shit.” We’re all for lightening up. One just hopes there’s some reasoning behind presenting potentially offensive material.

Soon, it was time for the final scene, a full-cast slow dance. “We don’t have to actually dance this time,” Ms. Vitale told her performers, but the lilting music began and the whores climbed down from the scaffolding above the bar. They lifted up the dead cowboys and soon everyone was swaying around the studio in each other’s arms.

Ms. Vitale looked on approvingly. “It’s coming together,” she said. 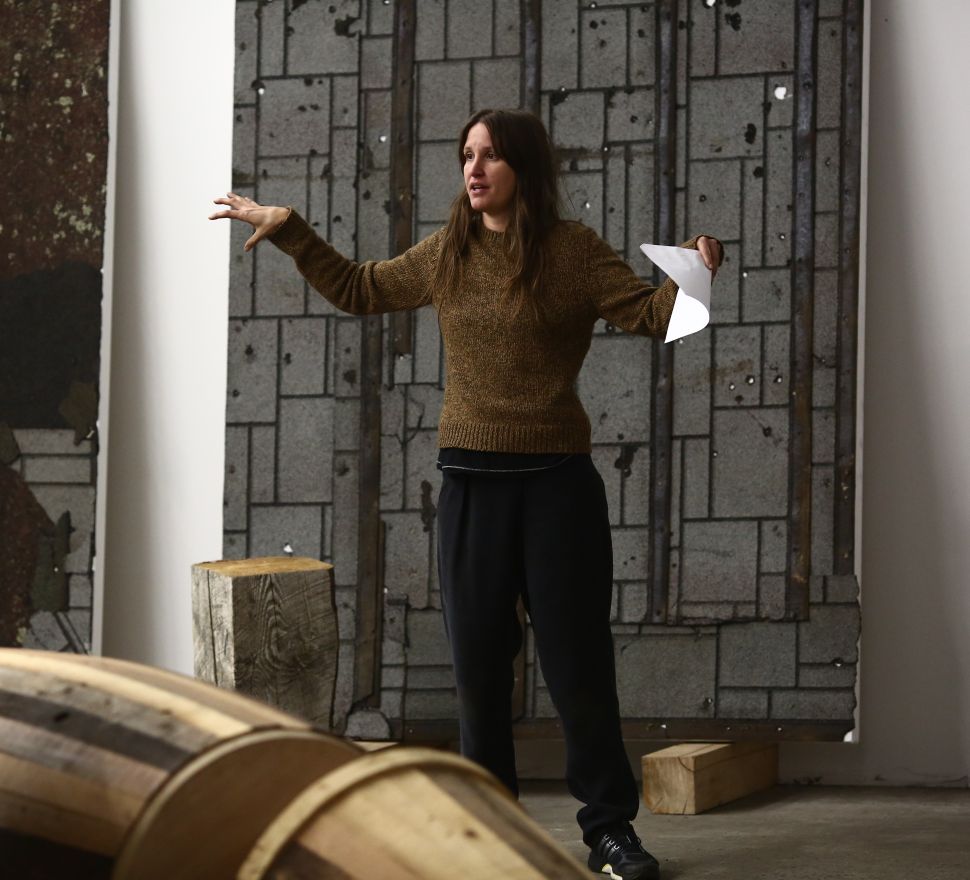