The Democratic leader of Newark’s North Ward Center received the honor this week of a statue at a ceremony attended by Gov. Chris Christie.

The CD9 Democratic Congressman campaigned against the Tea Party and showed some of his spitfire willingness to scrap face-to-face with them in person when he loudly complained in committee this week about the hypocrisy of those Republicans trying to derail Obamacare.

Heading into the Nov. 5 general election, the polls show the incumbent Republican governor consistently leading his Democratic opponent by 19-30 points.

The former mayor of Newark took the oath of office as New Jersey’s first African-American senator in a particularly well-received ceremony by a crowd of visiting, well-wishing Newarkers.

An Iraq War veteran, the former U.S. Marine will be the guest of honor and keynote speaker tonight at the 238th Marine Corps Birthday Ball in Pittsburgh, Pa.

Hamilton never disappoints. It has again emerged as that tortured political crossroads where all backroom brawls must finally tumble out onto its broad, bellwether streets. It is the scene of this year’s most complex collision, starting with the LD 14 Senate contest between incumbent state Sen. Linda Greenstein (D-14), the ultimate retail politician, and former state Sen. Pete Inverso, the man behind Megan’s Law.

The biggest Democratic County in the state lost its party leader this week when Essex County Democratic Chairman Phil Thigpen died at the age of 87. He was a beloved figure, wise counselor, staunch party standard bearer and dedicated opponent of injustice. He will be dearly missed.

Gov. Christie cut three ads that began running this week on cable television in LD 14, 18 and 38. In those ads, Christie sings the praises of Republican challengers Pete Inverso, Dave Stahl and Fernando Alonso. None of the challengers from South Jersey received similar support from the governor. Challenging state Sen. Jeff Van Drew in LD 1, Susan Adelizzi-Schmit had to settle for a posed shot with the governor at an event staged to highlight the governor’s close ties to Latinos.

They’ve built for years in South Jersey, those dogged opponents of GN3 and his Democratic Party minions, but their organization is for naught in this new world of Chris Christie bipartisanship, which likewise left Essex Democrats and their machinery confused by the endorsement of Christie by powerful Essex County Executive Joe DiVincenzo. Democrat or Republican, it’s a tough time to be a partisan. Add to that ELEC’s numbers this week showing independent expenditures run amok in NJ ($38 million and counting), and you have another reason why parties and their pooh-bahs lack more control this cycle than in recent memory.

They’re the leader among outside groups spending the most money on the gubernatorial and legislative races this year, an investment that does not appear to be paying off in the governor’s race. Look for the organization on this list next week in the winners’ column, however, if they land wins in key legislative tilts. 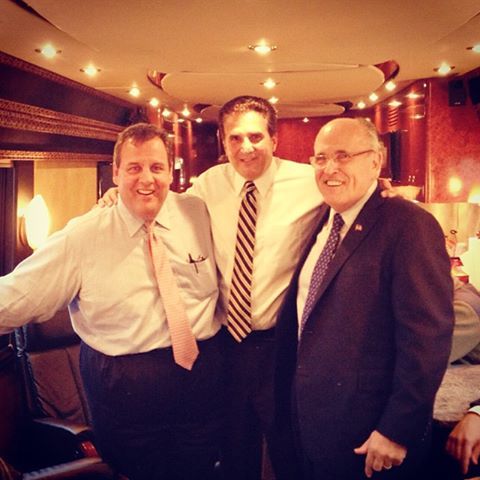