Ridiculed as the aristocrat more comfortable in an English saddle on the polo grounds than on a bar stool in Linden, the Senate minority leader marched through the critics and secured goodwill where it counted – party organizations neglected by the nationally aspirant Gov. Chris Christie, and the members of his own Republican caucus. Who would have thought that Kean, who prior to Tuesday night had only ever landed a knuckle on fellow blue blood Leonard Lance when Kean deposed the elder statesman, would be the person to deal the populist Christie a fat lip? It happened yesterday when the Senate minority leader secured his return to power following a showdown with the governor’s operatives, who wanted him packed in a box and shipped off to Cory Booker for a no-hope U.S. Senate conveyer belt ride.

The beloved former governor understood that Gov. Chris Christie – the kid who once stood in his Livingston driveway, was going after his kid. The elder statesman promptly got on the phone with junior and told junior to dig in his heels – hard, which the kid did

Shore Democrats picked up a big win Tuesday night when John Ducey was elected Mayor of Brick, defeating Republican Joseph Sangiovanni 63-38%. Incumbent Republican Mayor Stephen Acropolis, a key ally to Ocean County GOP Chairman George Gilmore, did not seek re-election. Along with Ducey’s victory as mayor, Marianna Pontoriero, Paul Mummolo, and Heather DeJong were elected to the Council. DeJong has been the longtime Finance Director for the New Jersey Democratic State Committee, serving under State Chairs Joe Cryan, John Wisniewski and now John Currie. Democrats now have 7-0 control in Brick. With a population of 75,000 people, Brick is the 13th largest municipality in the state. At issue became Sangiovanni’s personal bankruptcies, which sources said Democrats, who were outspent 3 to 1, ran an aggressive mail campaign headed up Shore area political consultant Mitch Seim. Sources say Seim ran not just the mail campaign, but overall messaging & day to day operations of the campaign which Ducey credited as critical to his victory. In addition to Brick, Seim ran the mail campaign in Union Beach, where Democrats swept council seats for the first time in more than 15 years, despite Governor Christie winning the town 3 to 1.

The Democratic Burlington County Freeholder seized on the retirement announcement of U.S. Rep. Jon Runyan (R-3) Wednesday to announce her own CD 3 candidacy a day later. There may be other Democrats who enter the fray – Assemblyman Herb Conaway (D-7) has expressed an interest, for example; but by getting in early Belgard positioned herself as a woman on a mission.

The sheriff swamped GOP challenger Frank Feenan 57-42% and won on a countywide ticket with incumbent Democratic freeholders Terry Duffy and Pat Lepore. This election was Berdnik getting that Jerry Speziale monkey off his back, not to mention ripping through what Dems feared would be a repeat of Gov. Chris Christie’s 2009 coattail effect when he dragged three GOP freeholders to victory. Bruce Springsteen with a badge, Speziale endorsed Feenan over Berdnik in Tuesday’s election – from the deep south, it should be noted – and the detective from Clifton turned countywide lawman more than convincingly won.

The political tactician from Passaic County, chief countywide counsel to Democratic Chairman John Currie, said all along that Democrats would be able to withstand a Christie hurricane in Passaic, and that’s exactly what happened.

The new mayor of Newark received the unanimous support of the City Council on Monday.

The New Hampshire State Republican Party on Wednesday announced the hiring of a new executive director: Christie’s classy regional political director. A Democrat working out at the gym the day after election said he nearly got thrown off his treadmill when he heard the news,which he interpreted as proof positive that Christie will run for president.

The governor received 1,242,116 votes to Barbara Buono’s 780,779, romped in Ocean County 76-23% and drained Buono’s wins in Democratic strongholds Hudson (where the governor won five towns) and Essex respectively down to 55-44% and 62-37%.But while he took a Juan Peron-like victory lap around Union City, state Sen. Tom Kean, Jr. (R-21) was on the telephones.

The architect of doom could not get around Kean, Jr., who after six years on the job and an 0-5 night Tuesday still had the votes in the Republican caucus to land the Senate minority leadership chair over the veteran senator from Cedar Grove.

Ultimately less Tea Party high jinks and more domestic trouble on the home front propelled the affable congressman from the Third District into retirement, sources say. Runyan said from the start that he only wanted to serve eight years in Congress, but he ended up packing his bags after half that time, and Republicans both in state and county GOP circles as well as national operators were disappointed to lose a winning rep. The timing of his exit stung the party and although CD 3 is more Democrat following redistricting, a Democratic candidate this year will have the advantage of running on a ticket with Senator Cory Booker. How unusual is Runyan’s exit? A Smart Politics analysis finds that he is the first two-term New Jersey U.S. Representative “who chose not to seek a third term since 1948 – ending a streak of 56 consecutive sophomore delegation members from the state who sought re-election.”

The town is not a GOP lock, but Sangiovani did himself no favors as his personal bankruptcies became the story in Tuesday’s local election in Brick and the Republican went down in ignominious defeat.

The Comptroller’s Office is scrutinizing the Newark councilwoman for allegedly steering $17,000 in city funds to the Global Women’s Leadership Collaborative, a non-profit she helped found in 2008, according to a preliminary report from the state agency, as reported by the Star-Ledger’s David Giambusso. The comptroller also cited Crump for directing $2,850 to the World Gospel Music Association, of which she is an active member, according to her City Hall bio. The veteran local pol is fighting what she says is an outlandish besmirching of her integrity, but in the meantime the headline his inhibited her ability to become council president.

What happened? Four years ago, Chris Christie swung Passaic County into play and this year most observers feared his presence in county and local battles, but the Passaic County Regular Republican Chairman could not resolve the intra-party feuding that continues to dog the Passaic GOP.

Denied the line by his own party, the veteran mayor of Bloomfield saddled up with the local GOP, and ended up getting run over with them in his hometown as Democrat Michael Venezia clobbered Republican Russell Mollica 59-41%.

We wore out the computer keypad referring to LD14’s Linda Greenstein as NJ’s ultimate “retail politician,” but the horrendous fact is that independent expenditures are making door pounding obsolete. A Democrat in a battleground district on Tuesday, in fact, told PolitickerNJ.com that he hadn’t knocked on a single door – in outright defiance of his consultants – just to prove a point. 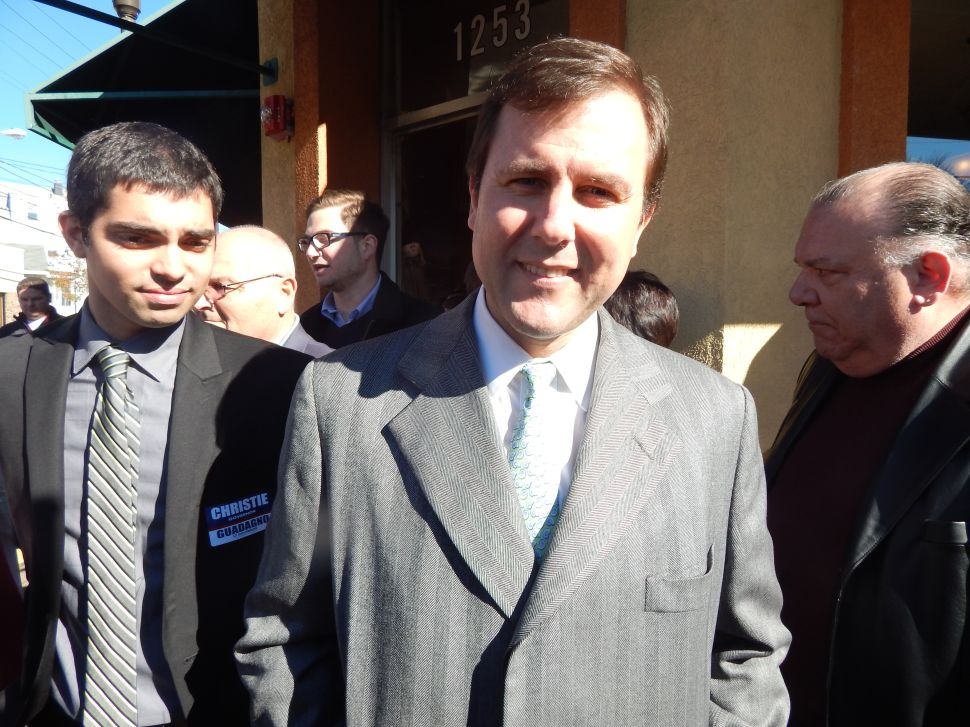