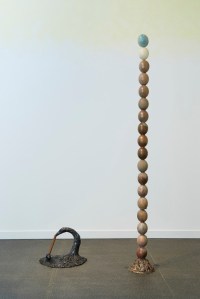 Pittsburgh’s Carnegie Museum of Art announced today some of the works that it has decided to snap up from its current (and very excellent) International exhibition, which arrives at the museum every four or five years. Artists whose work will be added to the Carnegie’s collection are Phyllida Barlow, Sadie Benning, Vincent Fecteau, Wade Guyton, Rokni Haerizadeh, Amar Kanwar, Dinh Q. Lê, Tobias Madison, Zanele Muholi, Paulina Olowska, Pedro Reyes, Mladen Stilinović, Zoe Strauss, Henry Taylor and Erika Verzutti, who makes quietly sumptuous little sculptures and paintings out of materials like bronze, eggshells and wax. Great stuff.

A second round of acquisitions will be announced early next year. “We’ve acquired as wide a selection as possible from the 2013 Carnegie International, with about 80 percent of the artists included,” Dan Byers, one of the show’s three curators (Daniel Baumann and Tina Kukielski are the other two) and the museum’s curator of modern and contemporary art, said in a statement. “It is very rewarding to see so much of the art that excited us during our travels and discussions—and that have already become visitor favorites—coming into the collection.”

(The Wall Street Journal had this story this morning but only mentioned Guyton and Benning.)