Today, we are all Claire at the law firm. (HBO)

Listicles count as news, don’t they?


We know that it’s slushy and snowy and rainy and holiday-y and we’re all hung over even though it’s only Tuesday. But I stayed up all night trying to see if I could draw a picture of a dog if I looked at enough photos of them on the Internet, and I still managed to get into the office today. So come on, people! Pick up the slack. Don’t make me regret buying all those additional illustrator tools on Paper at 4 a.m.!*

1. Gawker can’t be bothered to muster enough enthusiasm for the eight people who came to their holiday party to identify them; instead link back to Friday’s much more scintillating piece about crashing Buzzfeed’s Employees-Only bash. Talk about punching sideways.

2. David Edelstein gets bored enough to try one of those AMA things Haymitch Abernathy people keep talking about.

3. Gothamist hasn’t updated for about two hours and we’re starting to get worried.

4. We finally get that oral history of Six Feet Under‘s finale montage that we asked for eight years ago. (Alan Ball: Billy just bored Brenda to death, finally.)

5. Constant coverage of scene at Brooklyn Whole Foods. (Okay, that was pretty great.)

*I did not succeed. Dog bodies are hard. But I did do this, which is actually better in a lot of ways. 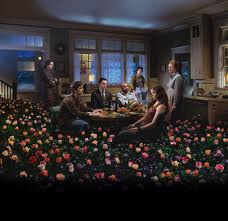