Once upon a time (i.e., last year), I was writing a weekly live music column that involved finding hyper-local shows that not a lot of other outlets were covering. I used Big Snow Buffalo Lodge as one of several primary sources, because it was a scrappy new venue that often booked whole bills of young bands I’d never heard of. (Also, it was near my house and I’m lazy.) They had some bigger bookings, but my desire to be a first responder led me to Google every random act that played there in the hopes of falling in love. I wanted to ease the pain I still felt over the demise of early aughts greats like Ponytail, These Are Powers and Parts and Labor. Not the Next Big Thing exactly, but … The Next Bizarre Thing? The Next Beloved-By-A-Statistically-Insignificant-Group-Of-Dorks Thing? Something like that.

The place shut down this past summer after less than two years of operation when a stray bullet hit co-owner Yoni David outside the venue, fucking his arm up and scaring the shit out of everyone present. While the shooter didn’t actually mean to shoot David, he definitely meant to shoot someone, so I can understand why he’d be too bummed to return after months of grueling physical therapy.

Now that David is out of the hospital, the Brooklyn DIY scene is finally bidding the venue a proper goodbye this week with two farewell/benefit shows at buddy venues Silent Barn and Shea Stadium. The shows will raise money for gear moving, bill paying and unresolved lease issues as Big Snow closes up shop, as well as providing us a space to reminisce about the good ol’ days of 2012.

My friends and I have many fond memories of Big Snow’s short existence—getting called out from the stage by Bosco Delrey for cell phone use, dressing up like monsters for what turned out not to be a costume party, falling down those treacherous basement stairs while totally sober. But the memory that stands out most for me is my first encounter with Boston’s Guerilla Toss. From the first off-kilter note, I could see those kids were committing. There was a girl in a romper screaming her head off, a gawky bassist in a dress (he’s since progressed to full frontal nudity), and three additional band members helping to create a fast-moving barrage of noise that coalesced into a real composition when I stopped moshing long enough to listen. My favorite experimental music—Melt-Banana, Arab On Radar, Child Abuse, AIDS Wolf—combines sincere (some might say hater-baiting) exploration of avant-garde concepts with the dirty energy of punk rock and the most off-putting names in the biz, and Guerilla Toss (Google at your own risk) fit the bill. It was confusing and smart and funny and crazy and I loved it!

Goodbye, Big Snow Buffalo Lodge. Thank you for all you have given us. May choirs of angels sing thee to thy rest.

Jamie Peck is an occasional DIY promoter living in Brooklyn. She has written for a variety of publications, including The Village Voice, MTV Hive, Jezebel, The Gloss and BlackBook. 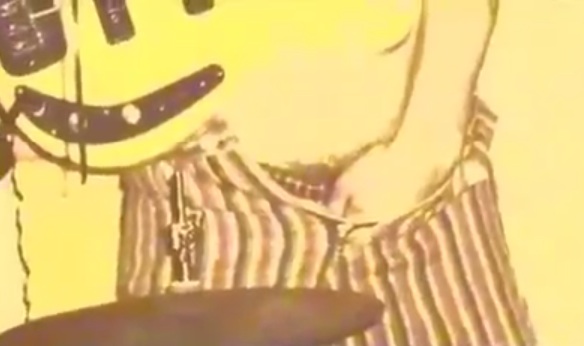