WEST NEW YORK – He may have initially backed the other guy in the 2012 U.S. Senate election, but West New York Mayor Felix Roque rallied for U.S. Sen. Robert Menendez (D-NJ) on the day when a local elementary school was named after the victor of the 2012 contest.

“I have a lot of respect for Senator Menendez. Almost 15 years ago I wanted to open a library in his name. He’s the first son of Cuban immigrants to be a Senator in this country,” the Cuban-born Roque said on Wednesday. “The Hispanic community is very proud to have Senator Menendez, and I’m proud to honor him.”

Roque first backed state Sen. Joseph Kyrillos (R-13) against Menendez in 2012, an election the incumbent Democrat won by a decisive margin. Some political observers noted with arched eyebrows the filing of federal charges against Roque and his son the same year for allegedly hacking a website set up by Hudson County Freeholder Jose Munoz that aimed to recall him. In conspiracy-happy Hudson, the indictments were charged with a sense of Menendez-inspired payback.

Rogue was acquitted of the charges in October; his son, Joseph, was convicted of a misdemeanor.

But whatever happened in federal court in Newark appears to be forgotten by Roque.

“I like Kyrillos, he’s a good man,” Roque said. “But Senator Menendez is good for education, and he’s good for my community. I’m endorsing him 100 percent.” 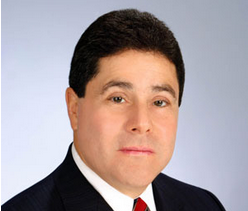