If you’re lucky enough to be invited inside Howard Slatkin’s elegant Fifth Avenue pied-à-terre, you will most likely be greeted with a flute of Cristal. The famed interior designer wants you to be as comfortable as possible in his home, which is crammed with antique vases, statuettes, porcelain flowers and embroidered curtains from India. The 12 rooms have the feel of a palace squeezed into a 14th-floor co-op overlooking the northeastern end of Central Park.

Since it was still early when Observer dropped in, we had coffee instead, courtesy of Dina, the uniformed housekeeper who has worked for Mr. Slatkin for over a decade. As we took our seats in the living room, she brought us homemade oatmeal cookies on an 18th-century silver tray, along with a linen napkin monogrammed with the initials of our host, who recently published a book about his home, Fifth Avenue Style. For Mr. Slatkin, every detail matters.

This may be the most intricately decorated apartment I’ve ever seen. Is it possible that you have some sort of obsessive-compulsive disorder?

You’re not the first person to have said that. [Laughs] You know what? I think life is short, and people create unpleasantries because they don’t think things out. It boggles my mind, because why wouldn’t you have put the time into decorating? I mean, you’ll spend six hours on Facebook, but you won’t spend six hours thinking about exactly what you want concerning something that will affect every day of your life?

What’s your philosophy of design?

The house should just please you. And you shouldn’t feel that this should be done, or it should look like that, or be influenced by what might be considered a trend or what the magazines are showing, if it’s not your idea of a dream. Do you feel that your home is in some way an expression of what your clients didn’t want?

Well, lots of the aspects of this apartment are ideas I’d thrown out to clients and that they passed on, but that I was so passionate about that I did them for myself.

The kitchen, which has Delft-style tiles, is an example of one of the rooms where I said to a client, “Let’s make the kitchen look like Menshikov Palace in St. Petersburg,” and she was like, “I don’t know about that.” In The Decoration of Houses, Edith Wharton writes that, “It is safe to say that the fewer the colors used in a room, the more pleasing and restful the result will be.” I have a feeling you’d disagree.

I do disagree with Mrs. Wharton, who, as we all know, was a very prickly personality. She was respected and admired, and a wonderful person that you’d want to have at your dinner parties and your lunches because she was so brilliant—but she was very unhappy, very, very prickly, and also very authoritative. And so quotes like that are fine for her. I would agree: If you want a restful room—if that’s your objective—then fewer colors. But what I’m for are no dictates.

What do you make of Pottery Barn, Restoration Hardware, Crate and Barrel and this kind of democracy of taste that has taken over the country?

Well, if that’s what you’re drawn to… You know, there are a lot of people—and God bless them, that’s their thing—who have no interest in design. They just want a comfortable background—they almost don’t even see it.

But what I am against is that sort of general conformity and blandness, and the inappropriateness of it. I just find it kitsch-like, but it’s done with no irony. So you go into a suburban home, like in my New Jersey village of Montclair—and it’s a beautiful Elizabethan- or Tudor-style home—and it’s all Restoration Hardware. That’s absurd, because we’re not in a Belgian farmhouse.

Is it frightening to entertain with all the expensive items on display?

No, I love entertaining. I’ll tell you, there are a lot of people who find entertaining frightening, and you know what the secret is? Do it all the time, and just make yourself happy. I’ve thought about it a lot, and it’s a fear of judgment. People have to just let go of that. So if you’re entertaining, you do what suits your lifestyle. The greatest compliment to your friends is to serve them what you would be having yourself if they weren’t coming. The reason I asked if you ever feel frightened is because when I walk through here—although I know you’re going for comfort—I feel like I’m trying not to knock anything over.

Well, I’m sorry you feel that way. You can knock something over, and if it breaks, it gets repaired. It doesn’t bother me. For me, the things aren’t precious. They’re nice things, but there’s nothing highly important. There’s much better stuff—there’s nothing I have that I would call the best of anything, and if it gets broken it gets broken. So what? What’s the big deal?

True. What would you say is your favorite thing in the apartment?

Oh, that’s easy. Every year my niece makes me an album of artwork, and that’s what I get for my birthday—in our family, we like to do non-store-bought gifts. And so, if the proverbial fire was raging, what would I grab? My niece’s albums. I suspect people would think I’d say, Oh, this picture, or that picture, or this object, but that’s all just stuff. You can go out and find that tomorrow afternoon.

Why do you have a urinal in the bathroom?

Well, not to put too fine a point on it, but it goes back to my philosophy of home decoration. There will be a bathroom that a man uses, and that there isn’t a urinal strikes me as the most absurd and uncivilized and unthinking way of how you use your bathroom in the whole world. That people don’t just strikes me as—people don’t think about how they live, and so they don’t have the pleasantest possible experience at home. 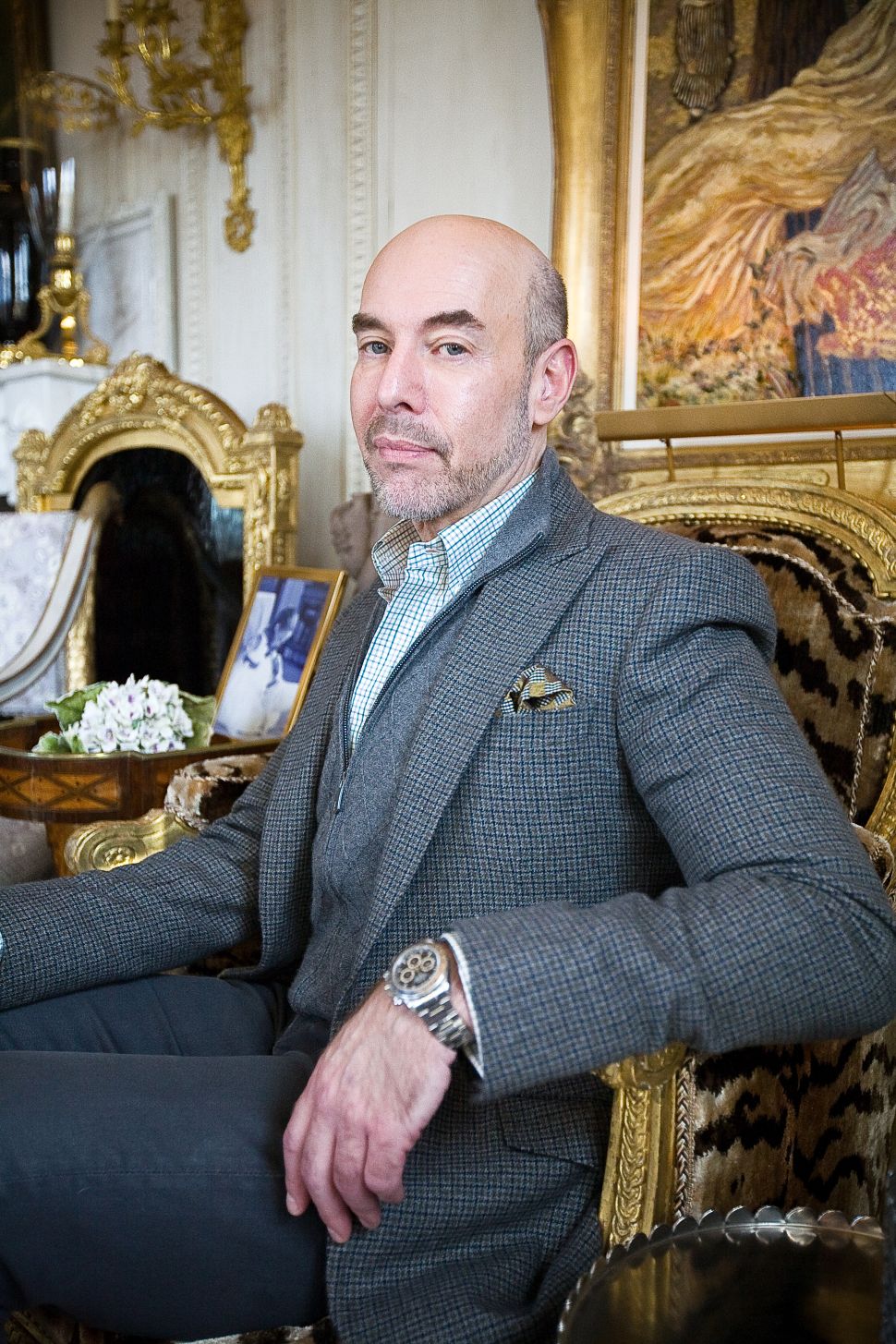