Bill Bratton during a recent appearance on MSNBC.

Mr. Bratton, a veteran of the Dinkins and Giuliani administrations, who also oversaw the police departments in Boston and Los Angeles, is best known for driving down crime in the city in the mid-1990s with a tough-on-low-level-crimes approach.

His selection provides yet another signal that Mr. de Blasio, who campaigned vowing to “end the stop-and-frisk era” and repair frayed relationships between community and police, is trying to address from the get-go concerns from detractor that he’ll be too soft on crime.

“Bill Bratton is a proven crime-fighter. He knows what it takes to keep a city safe, and make communities full partners in the mission,” Mr. de Blasio said in a statement. “Together, we are going to preserve and deepen the historic gains we’ve made in public safety—gains Bill Bratton helped make possible.  And we will do it by rejecting the false choice between keeping New Yorkers safe and protecting their civil rights. This is an Administration that will do both.”

“Mayor-Elect de Blasio’s priorities are my prioritie,” he said in a statement. “This is the best police force in the nation, and we are going to ensure our men and women have the best technology, the most innovative tactics and the strong support of the communities they protect.”

“This department will not rest on its laurels. We are going to continue making history as the safest big city in America,” he added.

The news was praised by a host of local officials, including Gov. Andrew Cuomo, who commended Mr. de Blasio for the decision

“Mayor Elect de Blasio has made a smart choice for New York in picking Bill Bratton, a law enforcement veteran with a proven record, to lead the City’s police force,” he said in a statement. “As the former Police Commissioner of Boston, Los Angeles and New York, Bill Bratton took on and successfully reined in historically high crime in some of the nation’s largest cities. I commend Mayor Elect de Blasio on his pick and congratulate Bill Bratton on his appointment.” 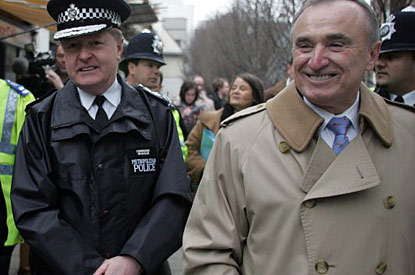