Bill de Blasio, who is set to take office on January 1st, is quickly gaining a reputation for tardiness.

The mayor-elect, starting to return to a regular schedule of public events following a sparse post-election calendar, has increasingly made a habit of keeping the press and public waiting when he does hold events, drawing scorn from some members of the media.

Yesterday, Mr. de Blasio kept reporters waiting in a cramped, steamy room on the 14th floor of his transition office headquarters for at least half-an-hour before emerging to announce his first round of appointments. Reporters–many jammed against each and against the walls of the conference room–openly groused about how long they’d been forced to wait. At the end of the event, one photographer reportedly fainted and required a stretcher.

At a Tuesday event in East Harlem the day before, Mr. de Blasio was also more than a half-hour late. His aides blamed traffic for the delay.

Today, Mr. de Blasio was late again, arriving long after an advertised 10 a.m. start time–despite the transition team’s instructions for the press to arrive between 9:15 and 9:45 a.m.

Many reporters packed into a small room at the Red Hook Justice Community Center in Brooklyn registered their frustration on Twitter. “BdB news on BdB time,” wrote one Wall Street Journal reporter. “A little concerned I’m going to be the person to faint at this presser,” added a Metro scribe.

One cameraman arrived 45 minutes late to the press conference, eliciting chuckles from the crowd–but he still beat Mr. de Blasio, whose entourage began to shuffle in around the same time. Mr. de Blasio himself entered roughly five minutes after that.

The delay caused at least one station to scrap its live coverage plans this morning.

“Let me say that there are limits to even our patience. And we have other things that we want to talk about on the show today and all kinds of great guests lined up. So we will come back at some point to Mayor-elect de Blasio and his presumed incoming police commissioner, Bill Bratton,” said WNYC radio host Brian Lehrer after 45 minutes of waiting.

“We’ll return to the news about the mayor and the police commissioner when it actually happens,” he later said, promptly moving on.

Mr. de Blasio’s spokeswoman did not respond to questions about what had held the mayor-elect up this week. But the tardiness is nothing new.

Right before the election, Mr. de Blasio–who later admitted he is not a morning person–showed up more than an hour late to a get-out-the-vote rally on the Upper West side that had been scheduled for 11:30 a.m. He later admitted he’d overslept. 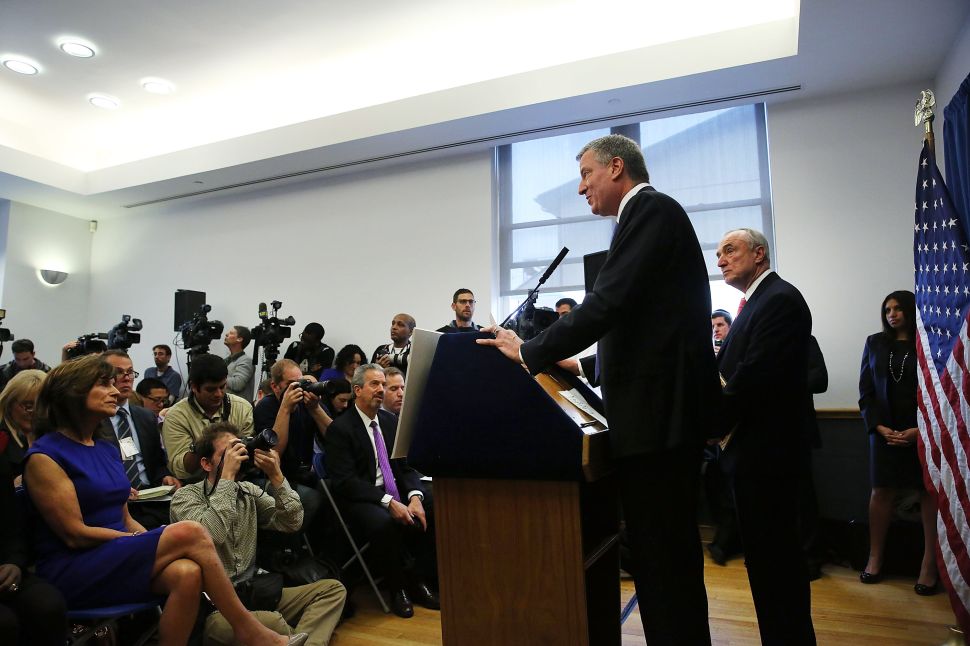