Mayor Michael Bloomberg today took aim at the city’s rising pension and health costs, calling what he dubbed the “labor-electoral complex” the most pressing threat to New York in the final major speech as mayor.

Speaking in a grand ballroom in front of members of the Economic Club of New York, Mr. Bloomberg said that exploding health and pension benefits for municipal workers threatened to undermine the city’s progress and urged his successor, Bill de Blasio, to push through reforms.

“Right now our country appears to be in the early stages of a growing fiscal crisis that, if nothing is done, will extract a terrible toll on the next generation,” said Mr. Bloomberg. “It is one of the biggest threats facing cities because it is forcing government into a fiscal straight jacket that severely limits its ability to provide an effective social safety net and to invest in the next generation.”

“The costs of today’s benefits cannot be sustained for another generation–not without inflicting real harm on our citizens, on our children and our grandchildren,” he added.

Over the past 12 years, the mayor said, the city’s pension costs have soared from $1.5 billion to $8.2 billion–a nearly 500 percent increase–siphoning off $7 billion he argued could have been used to fund for more affordable housing, classrooms or tax cuts. And while many other cities require municipal employees to chip in for at least part of their health care costs, he said the city’s unions have remained frustratingly stubborn.

“More and more mayors and governors in both political parties are asking across the country, which is the first real sign of a crack in the ‘labor-electoral complex’ that has traditionally stymied reform,” he said, dubbing a term aides said was a reference to President Dwight Eisenhower’s farewell address, in which the ex-president warned of the “military-industrial complex.”

Mr. Bloomberg went on take subtle aim at Mr. de Blasio, who has repeatedly criticized Mr. Bloomberg’s handling of the city’s labor contracts–all of which remain expired–trying to make the case that benefits reform needed to be a central part of the progressive politics that Mr. de Blasio champions.

“I think it’s no secret that elected officials have a tendency to make decisions based on short-term political rewards, rather than long-term economic gains,” he said. “We cannot afford for our elected officials to put their own futures ahead of the next generation’s and to continue perpetuating a labor-electoral complex that is undermining our collective future.”

“We need them to look ahead and to address the needs of tomorrow instead of being prisoners to the labor contracts of yesteryear. Simply put, our pension and health care system must be modernized to be sustained,” he added, vowing to continue to work on the issue after he leaves office.

Mr. Bloomberg ended by urging Mr. de Blasio to follow in his recent footsteps and refuse any new labor contract that includes salary increases unless it comes with lower benefits payments–arguing that his successor will have unique leverage over the city’s unions.

“They cannot hold out forever and they cannot afford to wait out another mayor. That will be at least four years,” said Mr. Bloomberg. “That puts the next administration in a powerful position of strength to negotiate historic reforms … The next administration will have a once-in-a-generation opportunity for comprehensive benefit reform, which is essential to our long-term future.”

For his part Mr. de Blasio, who has a far cozier relationship with union leaders, greeted Mr. Bloomberg’s suggestions with skepticism.

“Um, I can’t help but not that we are starting today’s discussion with an acknowledgment of the fact that every labor contract is open in New York City, that’s never happened before, that no previous mayor ever let that happen … So I would caution, as much as I appreciate Mayor Bloomberg’s advice, I would caution that one should be careful about giving advice from that perspective,” he told reporters at an unrelated press conference scheduled shortly after Mr. Bloomberg’s. “I think he is simply trying to cement his legacy.” 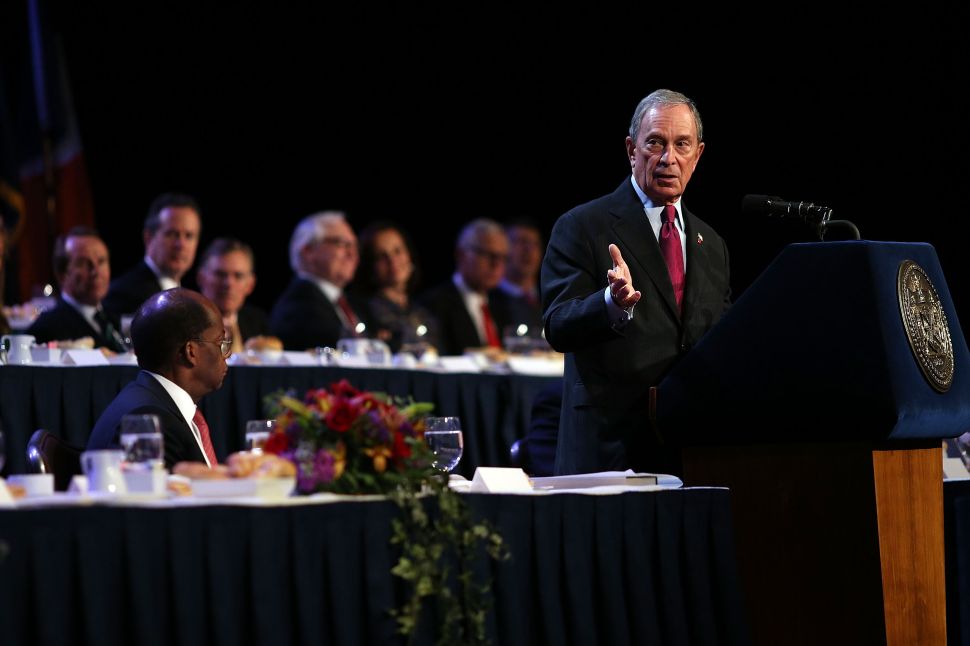