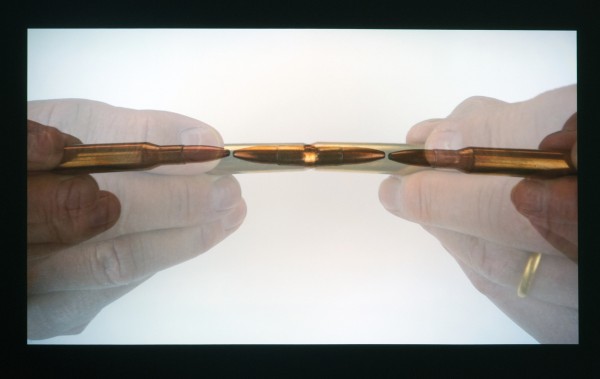 Bruce Nauman is back, and once again he’s making it look easy, with a few short, breezy videos in which simple ideas, set in motion, yield miraculous results. As with his other recent videos, his hands star. In some, he narrates as he works through combinations of fingers: thumbs, thumbs and indexes, and so on. Because his fingers are close together, viewing them induces the parallax effect: a short third finger seems to float between them. (You can try this right now: Hold out your hands close together, extend various fingers so that they almost touch, and stare through them off into the distance—voilà.)

Mr. Nauman also displays this effect by pointing at each other two bullets and two pencils, emblems of violence and pedagogy (themes that have long swirled through his work), and in another pair of videos he makes that phantom optical form a literal object by whittling a double-sided pencil, which he gingerly picks up with the points of two others—one video is set in a white space, the other in his home (his cat Mr. Rogers takes a stroll through).

Now late in his career (he’s 71), the New Mexico-based Mr. Nauman is paring down the making and reception of art to their two basic, irreducible components, eyes and hands, laying bare and marveling at their complexities. “It’s very hard to get a read on,” he says quietly in one video. “I don’t know, how does this look?” He has also sketchily drawn the various finger combinations from his videos (note his remarkable dexterity!) on paper using unforgiving silverpoint and goldpoint. All his movements, ideal or errant, are now recorded in precious metal. (Through Dec. 21)