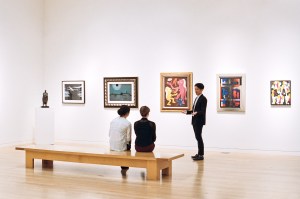 How to gauge the ever-increasing reach of the art market? There is, of course, the growing number of art fairs around the world, and the series of record-setting multimillion-dollar prices paid at auction for works by Jeff Koons, Francis Bacon, Edvard Munch, Alberto Giacometti, Pablo Picasso and so many others. There is the growing scale of art thefts and the frequency with which stories about art purchases and frauds make the front page of The New York Times. But there is also a quieter indicator: the increasing number of students looking to learn about the business of art at the schools set up by the two major auction houses, Christie’s and Sotheby’s.

“We’ll be awarding 300 master of arts degrees this year,” said David Levy, president of Sotheby’s Institute, which has campuses in London, New York City and Los Angeles. “Ten years ago, there were maybe 75 or 80.” The reason for the almost four-fold increase is “the explosion in the art market. People see the art market correctly as one of the most dynamic areas of the global economy, and they want to be a part of it.”

In Sotheby’s program, students learn the business of art, which entails art evaluation, including both connoisseurship and appraising in some specialized field. They are instructed in the differences between the market for one type of art and that of another, the legal and tax issues involved in the domestic and international art trade, how to market and sell artworks in galleries, at art fairs, online “and in the future,” Mr. Levy said. “How and where will art be sold in the next 10 years?”

Students also learn some art history in the area of fine and decorative art in which they look to specialize, but their aim is not to become scholars and art historians. “When they graduate college,” Mr. Levy said, “many art history majors see their only option as getting a master’s and then a Ph.D. in art history, which is fine for people who want to teach art history, but not everyone does. A lot of college graduates get jobs in art galleries, but their skills don’t prepare them for the asset-driven art market, and that’s where we come in.”

While Christie’s runs its own education program, Sotheby’s licenses its name to the Bethesda, Md.-based Cambridge Education Group, which operates Sotheby’s Institute. “We are very closely associated with the auction house,” Mr. Levy said. “Their specialists teach in our program, and our students are in and out of Sotheby’s all the time.” One of the central differences between a traditional art history master’s degree program and those offered by both Christie’s and Sotheby’s, he added, is that students aren’t just looking at pictures of artworks but go behind the scenes at the auction houses, handling the objects, talking to collectors, appraisers, museum curators, dealers, conservators, auctioneers and other people involved in the art trade.

Students at both Sotheby’s Institute and Christie’s Education generally represent a mix of recent college graduates, those who have been out of college for a number of years but who haven’t fixed on a career and others who have worked in one field for a while but want to make a change. “We have quite a few lawyers and accountants who want to try something else, refocus their skills,” said Veronique Chagnon-Burke, academic director of Christie’s Education. “The reports of record sales and huge prices for works of art have driven many of those career-changers our way.”

As one might expect, many of these students see the schools associated with the two largest art auction houses in the world as opportunities to find employment there, and “We do watch out for top talent,” Ms. Chagnon-Burke said. The students have mandatory internships at Christie’s, and, she said, every year the house recruits some for full-time employment. “Some of our graduates get jobs at Sotheby’s, too,” she said.

However, most internships don’t turn into jobs, and Mr. Levy noted that, while “a lot of people come into this program thinking they’ll get a job at Sotheby’s, they need to be disabused of that idea.”

Neither Christie’s nor Sotheby’s closely tracks what becomes of their graduates, but many of them do work in some facet of the art trade—in galleries, as art consultants, in an auction house, as art appraisers and even some artists. Mr. Levy said that between 10 and 15 percent of the Sotheby’s Institute students have undergraduate studio art degrees. “I learned about the business side of the art world, such as how to approach a gallery from the perspective of a gallery owner, as well as the significance of art fairs and the legal side of selling your work,” said New York City painter and printmaker Madeline Aguillard, who received her master’s from Christie’s in 2011. As an undergraduate at Vanderbilt University, she had double-majored in studio art and art history but wasn’t so set on a direction that she wanted to enter either a master of art history or a master of fine arts studio. However, “after the Christie’s program, I left with a desire to work more on my own art and apply to MFA programs.”

Another painter who took the Christie’s program, Cynthia Grow, who lives in both Manhattan and Barcelona, Spain, cautioned that “it would be incredibly naïve” to enroll at either Christie’s or Sotheby’s with “the hopes of furthering a career as an artist—that it would somehow help in hopes of furthering one’s career as a fine artist, that there would suddenly be connections with dealers, gallerists, potential clients that magically open the door to a successful career as an artist probably won’t happen. My advice? Save your money.” However, she is currently attempting to open an art gallery in Barcelona, and “my education at Christie’s will certainly help” with that. 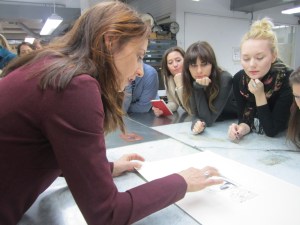 Perhaps more typical an experience was that of Margherita Desy, who majored in art history at the College of the Holy Cross but “didn’t know what I wanted to do for a graduate degree. I knew I wanted to increase my knowledge of the decorative arts,” which led her to enroll in Sotheby’s Institute’s works of art certificate program in 1984 (it wasn’t until 2010 that the Institute was accredited to award graduate degrees by the State of New York). Within six months of completing the program, Ms. Desy was hired as a curator at the Harriet Beecher Stowe House in Hartford, Conn. (“going to Sotheby’s was definitely a plus”), and she later took on her current role as historian at the USS Constitution Museum in Charlestown, Mass.

Another success story is Erin-Marie Wallace, who had earned a bachelor of fine arts degree in drawing from the University of Central Florida in 2000 but “always knew I was going to have my own auction company.” She took the Sotheby’s Institute master’s program in 2004, returning to start E.M. Wallace Auctions & Appraisals in Tarpon Springs, Fla., in 2006. “I’m the only Sotheby’s-trained auctioneer in Florida,” she said, adding that “my ultimate goal is to host Antiques Roadshow.”

Such auction-related cable television programs have been cited as spurring the growth in the number of people enrolling in auction schools around the country. There is a lot of excitement about finding valuable objects among things that were just piled up in the attic, but differentiating what is valuable and what is just old and dusty requires new and specialized skills. Just learning what is called the “auction chant” is no longer enough. “For decades, the auction industry focused on real estate, livestock and heavy equipment sales, but since the recession, people have begun to focus on art and other personal property, and there has been much more interest in that side of auctions,” said Aaron Ensminger, director of education at the National Association of Auctioneers in Overland Park, Kan.

There are auction schools in every state, many run by local auction houses, and graduates of these one- or two-week-long programs receive certificates that enable them to obtain a state license to auction property. Tuition to these programs generally ranges from $800 to $1,300. The master’s and nondegree programs at Christie’s and Sotheby’s are longer and considerably more expensive. Christie’s three semester art, law and business program in London costs $52,000 (32,000 pounds), while a nine-month-long certificate program on Modern and Contemporary art (“the course will allow you to analyze the interests and practices of a fast-changing art world and fast-track your career change”) costs $19,000 (12,000 pounds). Sotheby’s Institute’s art business master’s program also is three semesters long, costing $21,981 per semester—the certificate version of this program lasts two semesters, at the same per-semester rate—in addition to travel fees of $2,750 and estimated living expenses of more than $26,000.

The cost was worth it to Caitlin Kelly, a 2011 recipient of a master’s degree for Sotheby’s Institute’s art business program, who now works as a client adviser and fine art expert in the private client group for the Manhattan-based fine arts insurance brokerage Frenkel & Company. The high prices that most intrigued her were that of art and antiques on sale at the major auction houses. “The question I was drawn to is: Why is this worth $20 million?” she said. The instructors in her program, many of whom worked at the auction house, made clear to her “all the mechanisms at play that drive up prices.”

She didn’t get hired by Frenkel & Company right after completing her master’s degree. In fact, immediately after Sotheby’s Institute, she enrolled in a nondegree program in appraising at New York University in order to learn specific skills needed for this type of work. Referrals from people she met while at Sotheby’s Institute did lead to the job. Sotheby’s Institute “didn’t help me get this job, but the contacts I made while in the program has helped me be very successful.”