Council Speaker Christine Quinn ended her tenure leading the City Council yesterday with an emotional farewell to staff and colleagues, marking the end of what, by all accounts, was an extremely difficult year.

For, Ms. Quinn, who recalled having worked at or near City Hall since the late 1980s, the departure marks the end of an era.

“I love this place in a way most people wouldn’t think,” she told reporters at her final press conference before the Council’s last meeting of 2013. “I am humbled and extraordinarily grateful to have gotten to lead it for eight years and to have been associated with it for most of my career. And I will miss it. I have no doubt.”

Later, in the Council Chambers, Ms. Quinn stood surrounded by colleagues who had spent the better part of the meeting offered heartfelt thanks, commending her leadership and wishing her well. As she addressed the room one final time, her emotions overwhelmed her.

“The city is a better place because of all of you. And I just want to say thank you … on behalf of 8.4 million New Yorkers who you have slaved for. And you have made this city a better, more fair and more just place,” she said, fighting back tears, with tissues in hand.

“I am so proud of the administration we ran here. We were tough. We didn’t take any shit,” she declared. “What the hell, you know what I’m saying? It’s my last speech.”

Her final words came courtesy of her Irish grandfather: “Good bye. Good luck. And God bless you. And that’s all I have to say,” she said, earning a standing ovation that rang through the chamber. Not long after, staffers gathered in the City Hall rotunda, offering a round of applause as Ms. Quinn took one last symbolic walk–for now–down the steps of City Hall.

While the outcome was not what she had wanted, Ms. Quinn left yesterday on a positive note, insisting there was no part of her job as speaker she would miss.

“Somebody asked me what I didn’t like recently about this job, and the truth is—no bullshit—nothing,” she said. “The crappy days, the hard days, they were on behalf of New Yorkers, on behalf of my colleagues and I’ve loved every moment of it.”

“Even the ones that were difficult to get through, they were really an honor to have had the opportunity to be a part of,” she added, before the council went on to pass 26 pieces of legislation–the most of any meeting in the body’s history. (Among the measures were new regulations on e-cigarettes and  a move to ban Styrofoam packaging–the only thing “that lives longer than cockroaches or Cher,” she quipped.) Still, Ms. Quinn refused to wade into the politics surrounding the choice of her successor–which appears likely to be Councilwoman Melissa Mark-Viverito, a former Quinn ally, who turned on her last year during the battle over redistricting. Mr. de Blasio–who spent much of the mayor’s race pounding Ms. Quinn for being too close to current Mayor Michael Bloomberg–played a key role orchestrating the deal, drawing charges of hypocrisy from some.

Did she feel that intervention was inconsistent, one reporter asked.

“I have no comment on that,” answered Ms. Quinn.

Did she have any comment on the mayor-elect’s role in the speaker’s race in general?

What about Ms. Mark-Viverito? Would she make a good speaker?

“I wish whoever the next speaker is nothing but success,” she simply said.

Still, the day’s proceedings featured a number of lighter moments as council members said their goodbyes. After Councilwoman Diana Reyna noted that, during her tenure, she’d gone from being single to a married mother and Councilman James Oddo referenced his engagement, Peter Vallone Jr. joked that he felt left out of the club.

“Apparently I’m also the only person leaving the council still single,” quipped Mr. Vallone, who lost his bid for Queens Borough president. “If I could be more depressed.”

“Single and satisfied!” she shouted through the chamber, drawing laughs–and an idea from Mr. Oddo.

“There may be a moment here! Peter, you’re single. Peter, Tish; Tish, Peter,” he said.

And in his final act, term-limited Councilman Robert Jackson, who lost his bid for Manhattan borough president, decided to retire the name button he’d famously worn every day since running for office, placing it on his desk with a mix of triumph and sadness.

“Goodnight,” he declared, as the meeting was adjourned. 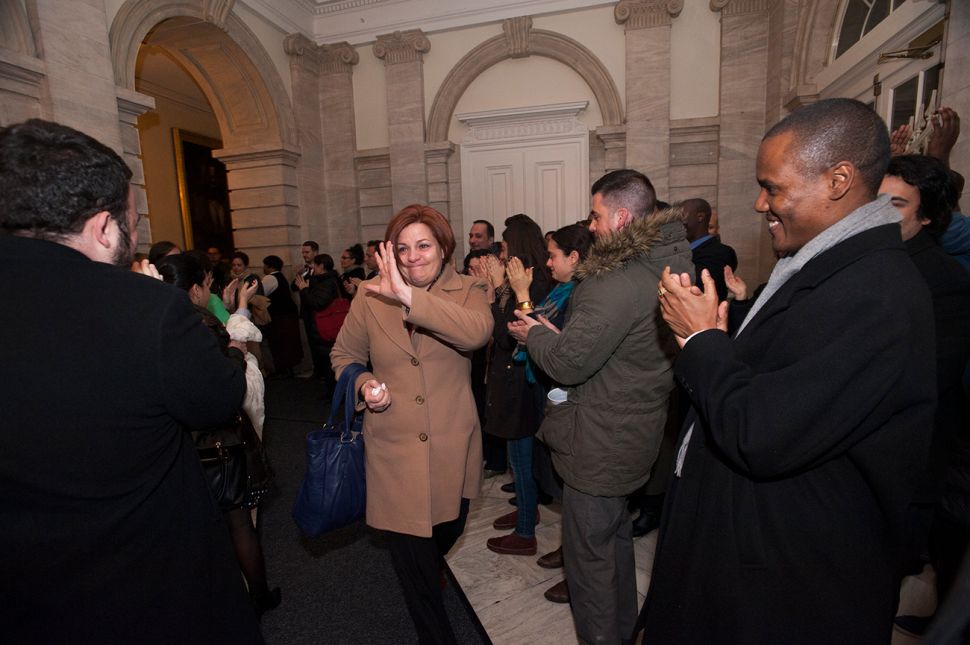