Even on the A train, it was a shocking sight.

This morning, Christmas Eve commuters mingled with last-minute shoppers and parents with scrubbed young children, dressed to the nines to visit the Midtown razzle-dazzle. Twin four-year-old girls with bows on their shoes giggled as their mother alternated kissing their noses.

And standing next to them, on a bright little screen not much bigger than a playing card, a man was watching graphic pornography on his smartphone.

Well, okay, it was a particularly raunchy hip-hop video. (I moved closer to make sure, obviously.)

But the sequence of writhing, breast-baring women that first caught my eye is definitely beyond anything I have previously seen on a subway car.

It used to be that surreptitiously reading over a fellow-passenger’s shoulder was the only way you could consume someone else’s media on the train. But unlike a page of newsprint, mobile devices compete to lure the attention of anyone within earshot or sight of the screen.

Now, even mid-range phones are full-blown entertainment centers. And people are becoming more accustomed to bringing their private viewing habits into the public realm.

Happily for tech sales, the best way to block unwanted stimuli is to replace it with counter-programming on your own screen and earphones.

So each of us becomes our own mini broadcaster, like the tower in the old RKO Radio Pictures credits, radiating lightning bolts from our noggins like the Bride of Frankenstein on a bad hair day.

And it’s only going to get more pronounced after this week, as gadget sales spike in the gift-giving season.

Last year, 17.4 million new mobile devices were activated on Christmas Day, according to Flurry, an analytics company specializing in apps. That compares to 6.8 million in 2011, suggesting not so much a trend as a tidal wave.

Each one of these merry-making devices is a little Pandora’s box, unleashing the tastes of its owner onto the world—or at least the people standing next to them.

This morning, I was struck by the image of those beautiful twin girls. Bright as new pennies, they were safely enfolded in their mother’s love as the man standing next to them watched thong-clad women crawl across a shag carpet on their hands and knees.

To a couple of four-year-olds, that’s probably just the way the world is. It’s the rest of us who have to get used to the fact that the A train is now a multiplex. 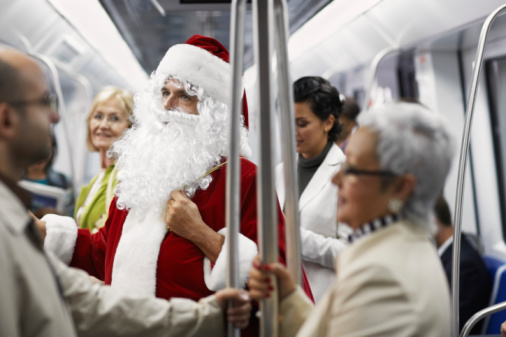