For a decade, remaining a close ally of the Queens County Democratic Party meant that Charles Meara, the chief of staff to two City Council speakers, could earn an annual salary almost equal to the mayor.

But if Councilwoman Melissa Mark-Viverito is crowned the next speaker of the City Council, Mr. Meara and a host of other county loyalists may be swiftly axed. Cleaning house is standard for incoming speakers–when outgoing Speaker Christine Quinn took over, she immediately fired about a fifth of central staff. But sources say they now expect an even greater exodus if Ms. Mark-Viverito is elected speaker, stretching far beyond what would be doled out if her top rival, Councilman Dan Garodnick, somehow prevails in the end. (Mr. Garodnick is the candidate backed by the Queens and Bronx county organizations.)

“People in the City Council are preparing for the worst,” said one recently departed staffer in the City Council’s central office. “Everyone is sounding very anxious. Who knows how many jobs will be gone? People are trying to keep their heads up but are acknowledging the reality.”

That reality, council insiders say, is Ms. Mark-Viverito’s willingness to clean house if she wins, potentially decimating the City Council’s current central staff, which numbers around 300 and is filled with individuals who scooped up choice posts through their ties to the traditional county organizations after the last speaker’s race. Queens in particular could suffer; sources say that county organization was the greatest beneficiary of patronage posts.


Ms. Mark-Viverito, who represents East Harlem and the Bronx, secured a deal earlier this month with the aid of Mayor-elect Bill de Blasio and the Brooklyn Democratic Party that gives her enough votes to win if they hold until ballots are cast on January 8. One expected outcome of this arrangement is that the Queens and Bronx loyalists who enjoyed plum City Council posts under Ms. Quinn’s tenure will be left to job hunt while Ms. Mark-Viverito’s allies–and Brooklyn loyalists–find the doors of 250 Broadway flung open to them.

The resistance of the Bronx and Queens machines to Ms. Mark-Viverito’s candidacy could only further encourage her to spare no one, according to insiders–although much of these discussions are being held behind closed doors and new deals could still be hashed out between the various power brokers.


“Brooklyn got the shaft years ago. So there’s an overall fear that now it’s Brooklyn’s turn and if you’re not with Brooklyn then you should go ahead and buy résumé paper,” another Council source told Politicker.

Of course, every new speakership comes brings new deals and staff changes. When Ms. Quinn took over from Gifford Miller in 2006, she immediately fired 61 staffers, including–one longtime council staffer said–employees who had predated Mr. Miller and had been hired by his predecessor, Peter Vallone Sr. Since Ms. Mark-Viverito and Ms. Quinn are political rivals, there could be an even greater chance for bloodletting, sources said.

“The question is, will it be like when Peter Vallone Sr. won and the county organizations had been at war?” asked Jerry Skurnik, a veteran political consultant. “Vallone didn’t fire that many people. But it wouldn’t also be out of the ordinary for there to be a lot of changes.”

There is no precise estimate of how many central staffers are likely to be shown the door, but when it comes to the central offices of the City Council–where salaries tend to be much higher than what individual staffers to council members earn–there are some likely potential candidates. Employees tied to Queens and the Bronx who work in the lucrative units that draft legislation, perform community outreach and handle administrative services may all be cut.

Mr. Meara, the chief of staff to Ms. Quinn and Mr. Miller, is likely to be on the chopping block, sources said. Mr. Meara, who did not respond to a request for comment through a council spokesman, is the brother of Queens County Chair Joe Crowley’s personal lobbyist. In 2012, Mr. Meara earned $208,884–more than Ms. Quinn, according to records compiled by the Empire Center’s SeeThroughNY website.

Another Crowley loyalist, Ms. Quinn’s executive legislative coordinator, Ramon Martinez, who made $206,190 in 2012, is also considered vulnerable–though one council insider said Mr. Martinez, who was Mr. Crowley’s one-time brother-in-law, could be “saved.” (It’s not clear if Ms. Mark-Viverito would have any motivation to preserve a high-ranking Queens loyalist.)

Replacements for those who are ousted will not come solely from the ranks of Brooklyn Democratic loyalists. People from Ms. Mark-Viverito’s political base are expected to be rewarded, as are individuals Mr. de Blasio wants to hire, political observers said. 1199 SEIU, the healthcare workers’ union that aggressively backed Mr. de Blasio’s mayoral bid and Ms. Mark-Viverito’s speaker candidacy, could also be in line to make recommendations, observers said.

City Council spokesman Jamie McShane, who already has a job in the private sector lined up for next year, declined to comment on the staffing decisions.

A spokesman for Ms. Mark-Viverito did not respond to questions about hiring or firing practices, saying only, “If Melissa is given the honor to be speaker she aims to build the best team to advance a progressive and inclusive agenda for New York City.”

No hiring decisions, a source said, have been made yet. 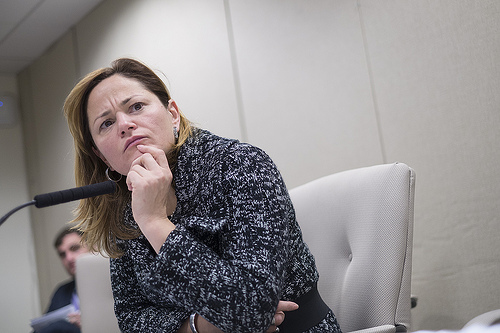