To move or not to move? That, for Mayor-elect Bill de Blasio, is still the question.

The New York media continues to buzz about whether Mr. de Blasio, a longtime Park Slope resident, will leave his Brooklyn digs to become the first inhabitant of Gracie Mansion in more than a decade. But Mr. de Blasio said once again today that he and his family had yet to make a final decision about whether or not they’ll uproot to the Upper East Side come January.

“The family was going to talk over Thanksgiving and we did. There’s still some serious logistics and specifics to work out,” Mr. de Blasio told reporters outside the Christian Cultural Center in East New York, Brooklyn, where he’d attended service.

“The pull of Brooklyn is very strong in our lives and so we have to figure out, still, that balance point of the love of our neighborhood and the real security and logistical considerations that matter in this decision,” he explained.

Mr. de Blasio previously said a decision would be reached after he met with his family over Thanksgiving, when his daughter, who attends college in California, was back home. One primary concern, he previously said, were objections from his son, Dante, who would have to commute from the Upper East Side to Brooklyn Technical High School in Fort Greene every day.

But security is also a consideration for Mr. de Blasio, whose block would likely have to embrace a heavy police presence if he decides to stay.

If Mr. de Blasio ultimately shuns Gracie Mansion, he would be the second straight may to do so. Mayor Michael Bloomberg, a billionaire, spent large sums of money to refurbish the two-century-old building, but lived in a nearby townhouse instead, which is constantly monitored by the NYPD.

Mr. de Blasio declined to set a new deadline for exactly when a decision will come. 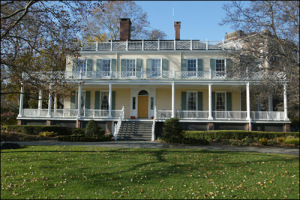