Mayor-elect Bill de Blasio and his newly-appointed Deputy Mayor for Health and Human Services today vowed to change the way the city treats its poor and to address the homeless crisis in a city where 22,000 children now live in shelters.

Mr. de Blasio began a press conference today talking about Dasani, the 11-year-old girl profiled in a widely-read, in-depth New York Times series this week about the struggles of living in the city’s sprawling shelter system.

“The story of this one young lady, Dasani, I can tell you–having criss-crossed the city and talked to all sorts of people in the course of this week–that it’s been gripping to a lot of people. It’s been gripping to all of us who are part of this transition. It’s not that we didn’t know these problems exited before, but to see them through the eyes of one child and one family brings it home in a very forceful way,” said Mr. de Blasio, speaking at a press conference announcing the appointment of Lilliam Barrios-Paoli.

Mr. de Blasio said that Dasani’s experiences living in a decrepit shelter in Brooklyn just blocks away from million-dollar Fort Greene brownstones was a perfect illustration of the central theme of his campaign: the city’s income disparities.

“If you ever needed an illustration of what the tale of two cities is all about, there you have it,” he said. “We are simply not going to allow this kind of reality to continue.”

Despite a vow to cut homelessness by two-thirds by the end of his tenure, the city’s homeless and shelter populations have grown tremendously under Mayor Michael Bloomberg’s watch. More than 50,000 people, including more than 20,000 children, now sleep in homeless shelters–“unprecedentedly high levels” that “simply can’t continue,” Mr. de Blasio said.

While the Bloomberg administration has largely blamed cuts in federal and state funding, as well as the economic downtown, Mr. de Blasio took aim at some current policies, which he argued have only made the situation worse.

“The sad fact is that some of our city’s policies and some of our approach over the years have not helped people to transcend their challenges,” he charged. “Some ways, unfortunately, some of these policies, some of these approaches, have kept people stuck in place. And we’re not going to let down Dasani or any young woman or any young man like her. It’s our job to do better for them.”

Mr. de Blasio and Ms. Barrios-Paoli went on to outline a starkly different approach to Mr. Bloomberg, who has often defended conditions in city shelters and tried to push through barriers to access, such as forcing those applying for space to prove they have nowhere else to go.

Ms. Barrios-Paoli said that, too often in this city, the poor have been stigmatized.

“For a long time, there’s been a very negative perception of who the poor are and we have mistreated them in many ways. We have been punitive. We have assumed that people are poor just because they choose to be poor as opposed to because life happened to them,” she said. “And I think we need to change that attitude because it will never help us solve the problem.”

To address the problem, Mr. de Blasio vowed to use “every tool we have,” engaging the public and private sectors, Washington and Albany. The pair underscored the need to restore preventative programs, including anti-eviction legal services,  alternatives to the shelter system and new rental subsidies.

But pressed for specifics, Mr. de Blasio remained vague on exactly what new subsidies would look like and how they would be paid for, when the city’s budget appears to have little padding. (He said First Deputy Mayor Tony Shorris and Ms. Barrios-Paoli were “two creative geniuses at finding money where it does not appear to exist.”)

“An ever-growing homeless population is unacceptable to the future of New York City. It’s just literally unacceptable … It will not happen under our watch,” said Mr. de Blasio “We can’t let children of this city like Dasani down.” 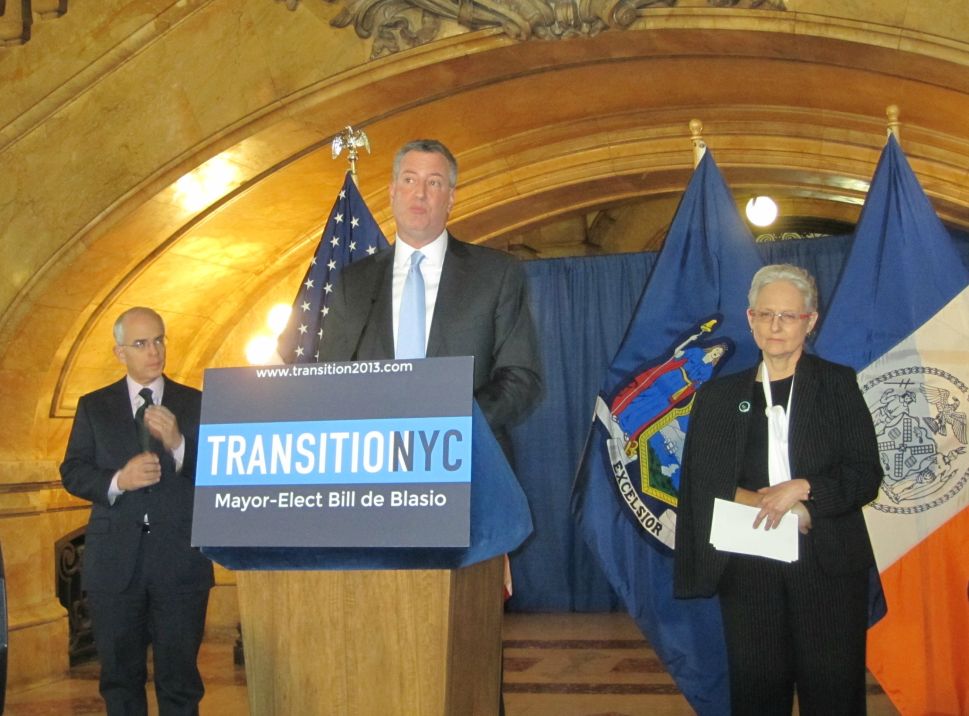