With less than 12 hours to go before he’s sworn in as mayor, Bill de Blasio dramatically picked up the pace of his appointments this afternoon, naming five top staffers, including new leaders for the Department of Transportation and the Department of Homeless Services.

Gilbert Taylor, who currently serves as the executive deputy commissioner at the Administration for Children’s Services, will be commissioner of homeless services, charged with finding new ways to reduce the city’s homeless population.

Kyle Kimball will stay on as president of the city’s New York City Economic Development Corporation.

View the full press release unveiling the appointments below:

with Stan Brezenoff as Special Adviser

In naming heads of the city’s Economic Development Corporation, Department of Homeless Services, Department of Transportation and Office of Labor Relations, the Mayor-Elect reiterated his commitment to a broad slate of reforms, including investing in small businesses, making streets safer, developing alternative programs for homeless families and individuals, and negotiating in good faith the New York City’s workforce contracts.

Polly Trottenberg, current Under Secretary for Policy at the U.S. Department of Transportation, will serve as the Transportation Commissioner, executing Mayor-Elect de Blasio’s ambitious agenda to expand Bus Rapid Transit in the outer boroughs, reduce traffic fatalities, increase bicycling, and boost the efficiency of city streets.

Kyle Kimball, who has spearheaded transformative investments in emerging industries across the five boroughs, will continue to serve as the President of the New York City Economic Development Corporation and lead efforts to develop new career paths the lift New Yorkers into the middle class.

“From revamping our approach to homelessness, to ending the epidemic of traffic-related fatalities on our streets, the stakes for these agencies could not be higher. We sought progressive leaders with the depth and know-how to take on these challenges, and we have built a phenomenal team that is ready to take on a bold agenda,” said Mayor-Elect Bill de Blasio. “More families and more children are going to sleep each night in our homeless shelters than ever before. It’s a crisis we will confront with every tool at our disposal. I share Mayor-Elect de Blasio’s fundamental commitment to more aggressive homelessness prevention policies and housing support to transition people from shelters to stable living. We will have a compassionate and effective approach that helps families in crisis,” said incoming Commissioner of Homeless Services Gilbert Taylor.

“One life lost on our streets is too many. We are committed to the maxim that safety— for everyone who uses the roads, including pedestrians and cyclists —is our top priority,” said incoming Transportation Commissioner Polly Trottenberg. “From improving our roads, bridges and waterways to better serve our citizens and businesses, to connecting New Yorkers to jobs and opportunities through improved high-speed bus service, to expanding biking across the five boroughs, we can have a transportation system that is safe, efficient and accessible to all.”

“It’s our charge to do everything in our power to address rising inequality. We will do it by making every economic development dollar go further, and by investing in new career paths and emerging industries that will lift New Yorkers up, in every community. We will innovate new ways to spur affordable housing and meet the needs of neighborhoods, especially those in the boroughs outside Manhattan,” said President of the New York City Economic Development Corporation Kyle Kimball.

“New York City has the finest workforce in the world. We are going to reset the relationship between this city and the men and women who serve it. It will be based on honesty and respect, and a shared commitment to making this city work,” said incoming Director of Labor Relations Bob Linn.

“We have enormous challenges ahead of us. It won’t be easy, but this will be a progressive and effective administration that protects taxpayers and respects its workers. This team will have the benefit of decades of experience working with labor to achieve cost savings, balanced budgets and fair contracts. That’s what we will deliver for the people of this city,” said Special Adviser Stanley Brezenoff.

Gilbert Taylor has led a distinguished career working in the public and non-profit sectors to support low-income children and families.

Taylor brings nearly two decades of experience working with at-risk families. He began his work at the City’s Administration for Children’s Services in 1996 as a Supervisory Attorney in Family Court. He rose to become an Associate Commissioner in the Division of Child Protection and has served since 2011 as its Executive Deputy Commissioner. During his tenure, the number of children that have been moved into foster care has declined substantially. Children are now directed to care only 11 percent of the time, with most families receiving preventive services to keep incidents from occurring and hold families together. Taylor also oversaw a successful reduction in the caseload of ACS caseworkers, averaging at 35 percent. This has allowed ACS staff to spend more time with each family, resulting in fewer negative incidents and more families staying together.

Taylor has emphasized the use of evidence-informed, home-based preventive services and programs through which social workers work directly with parents and children in their home settings. He was also involved in ACS’s work with the New York State’s Office of Children and Family Services (OCFS) on the Close to Home Initiative, which seeks to keep youth facing incarceration in or near their communities, instead of being shipped to upstate facilities.

Taylor previously managed the agency’s Division of Family Court Legal Services, where he sought to move cases through Family Court more expeditiously. Under his leadership between 2007 and 2010, FCLS successfully reduced court-case processing time frames on abuse and neglect matter in partnership with the Court System. Taylor also reinvented the Family Assessment Program at ACS, which has improved outcomes for adolescents and their families who are in crisis.

He attended Cornell University and holds a law degree from the University of Illinois College of Law. Originally from Queens, Taylor now resides in Harlem.

Polly Trottenberg has spent her career fighting for a strong and safe transportation system that connects all Americans to jobs, opportunities and improved quality of life; overseeing funding, financing and implementation of major federal legislation; and spearheading innovative ideas to create livable cities and sustainable communities.

Twice nominated by President Barack Obama and confirmed by the U.S. Senate, Trottenberg currently serves as the Under Secretary of Transportation for Policy at the U.S. Department of Transportation, the third-highest position within the agency. She has previously served for three years as Assistant Secretary. Trottenberg has promoted a bold national agenda to grow and strengthen urban transportation systems and rebuild aging infrastructure to help create jobs and spur economic development. She has been a national advocate for “Fix-It-First” investments to address the nation’s backlog of deferred maintenance on highways, bridges, transit systems and airports.

At the U.S. DOT, Trottenberg helped oversee the $3.6 billion TIGER discretionary grant program, which has invested in hundreds of innovative transportation projects throughout the country and has helped marshal major transportation bills through Congress to give cities and local communities more say in where transportation money is invested.

Prior to joining the U.S. DOT, Trottenberg was the inaugural Executive Director of Building America’s Future, a bipartisan non-profit organization created to advocate for increased investment in infrastructure and major transportation policy reform.

As legislative director for Senator Charles Schumer from 1999 to 2005, Trottenberg earned a reputation as a tenacious advocate for investment in New York City. She led the development of New York’s bipartisan post-September 11 legislative agenda, which included securing $21 billion in appropriations, a $5 billion business recovery tax package and a $4.5 billion transportation infrastructure plan for lower Manhattan.

As Legislative Assistant to Senator Moynihan from 1996 to 1998, Trottenberg developed a political strategy for Northeast and urban states to maintain environmentally sustainable highway and mass transit programs during authorization of the Transportation Equity Act for the 21st century.

Prior to serving Senator Moynihan, Trottenberg worked at the Port Authority of New York and New Jersey.

Since 2008, Kyle Kimball has steadily risen to become the President of the New York City Economic Development Corporation, leading the organization’s efforts to position New York City as the global center for innovation in the 21st century. As the NYCEDC’s Executive Director, Chief Financial Officer and Executive Vice President & Division Head for Real Estate, he has played a critical role in investments in emerging industries across the five boroughs. He helped shape the Applied Sciences NYC initiative, creating four new graduate science and engineering campuses that will be lynchpins in the 21st century economy. Kimball has helped deliver outer-borough economic development projects, including the Gotham Center Project in Long Island City and the transformation of the Kingsbridge Armory in the Bronx. And he has expanded wireless and broadband capabilities in all five boroughs and developed programming through NYCEDC aimed at low-income and immigrant New Yorkers. He is also an advocate for the preservation of manufacturing jobs and helped to expand the City’s Industrial Business Zones.

Prior to his service in government, Kimball was a Vice President at Goldman Sachs and JP Morgan Chase, focusing on finance and risk management.

Kimball holds a degree in Government from Harvard College, and a Master’s in Public Policy from the Kennedy School of Government at Harvard University. With AmeriCorps, he worked as a hospice care provider for end-stage AIDS patients.  Kimball currently lives in Brooklyn, with his husband Doug and daughter Isadora.

Robert Linn has distinguished himself as one of the most respected labor negotiators and mediators in the nation, with deep experience on both sides of the negotiating table.

Linn has taught at Fordham University School of Law, lectured at The New School and Cornell University, and conducted seminars on collective bargaining, health benefit cost containment, and labor-management cooperation.

He attended Haverford College and holds a law degree from the University of Chicago Law School. A New York City native, Linn currently lives in Park Slope, Brooklyn with his wife Carol.

Stanley Brezenoff has managed some of the most complex organizations in government and the private sector.

As Executive Director of the Port Authority, Brezenoff was on site at the World Trade Center during its first bombing in 1993. He was also responsible for administration of the Hudson River bridges and tunnels, the region’s four major airports, the PATH system, leasing and management of the original World Trade Center, several industrial development districts, and shipping ports in New York harbor.

Brezenoff was born in 1937 in East New York, and majored in Philosophy at Brooklyn College. 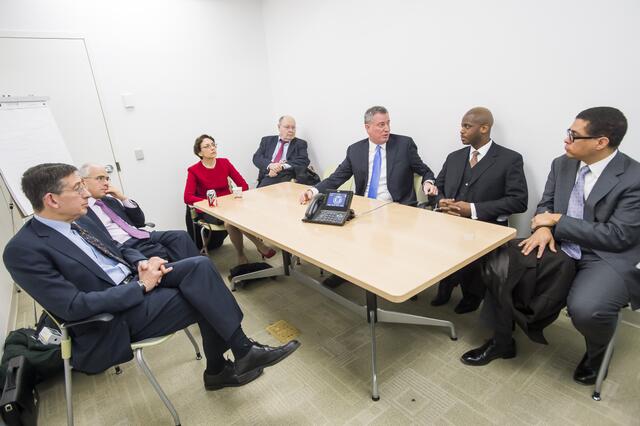