Mayor-elect Bill de Blasio insisted today he’s still on track to reform the NYPD, even though he just chose a member of the old guard to lead the department in his administration.

“I could not be more enthusiastic,” said Mr. de Blasio of his pick, Bill Bratton. “This is one of the choices that a mayor gets to make–that is most difficult–for the people of our city. It is a sacred choice.”

Mr. Bratton, a police commissioner in Rudy Giuliani’s administration, carries the stigma of being associated with the infamously tough-on-crime mayor. Indeed, throughout this year’s election, Mr. de Blasio appeared to frame his candidacy as the anti-Giuliani when it comes to police policy, accusing the current mayor and Mr. Giuliani of fraying police-community relations.

Mr. Bratton has also defended the controversial stop-and-frisk policy, which Mr. de Blasio has promised to rein in, describing it on MSNBC as “the fundamental tactic used by police in every community in the United State every day.” He further opposed a City Council bill creating an inspector general for the NYPD, which Mr. de Blasio supported.

But pressed, Mr. de Blasio insisted there was no contradiction between his approach and his appointment, cheering Mr. Bratton’s success in driving down crime while emphasizing other aspects of his record.

“There was different leadership in the city back then. Let’s just say that,” Mr. de Blasio said, arguing that Mr. Giuliani directed the city with “a different set of values” from his own.

“It’s a new day with new leadership, and with an even more refined … compelling approach that I think he will apply now,” he added later.

Mr. de Blasio also pointed out that nearly two decades had passed since Mr. Bratton last headed the department, suggesting Mr. Bratton’s seven years as Los Angeles’s police chief might be more relevant in evaluating his record. (Mr. de Blasio also argued the LAPD’s sharp rise in stop-and-frisks under Mr. Bratton did not conflict with his own push to curtail the policy, saying Mr. Bratton was focused on stopping potential suspects instead of stopping young men of color indiscriminately.)

“I imagine that many of us in this room have become stronger, wiser [and] better over 20 years. I think from my advantage point, that Commissioner Bratton has gotten better every year. What he did in L.A. was arguably the toughest mission anywhere in the country in terms of bringing police and community back together,” he said.

Fundamentally, Mr. de Blasio labeled Mr. Bratton a “progressive visionary” who would repair relations between the NYPD and communities of color.

“I think it’s well known that Bill Bratton is the leading national voice of community policing, of a progressive and proactive approach to policing–focusing on the collaboration between police and community. He recognizes that residents are safer and police officers are safer when you have that kind of partnership,” he declared.

For his part, Mr. Bratton vowed to “get it right with this city once again” when it comes to public safety and to “do everything in my power to make … this mayor’s dream” of bringing police and community together come true. 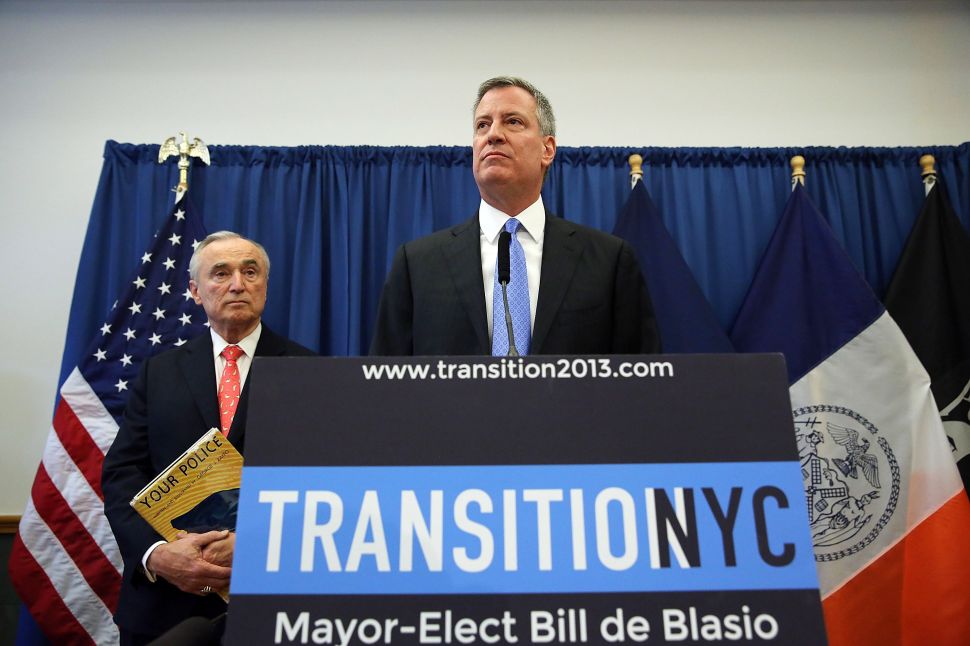