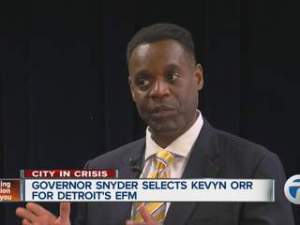 As we count our blessings this holiday season–I, for instance, ate a bag of Peanut M&Ms for dinner last night–let’s take a moment to consider Kevyn Orr, Detroit’s emergency manager and the man who started the ball rolling on the argument that the collection of the Detroit Institute of the Arts was not immune to the city’s creditors. He was profiled recently in The New York Times, offering a few personal details on the most powerful–and presumably hated–person in Detroit right now.

Mr. Orr makes $275,000 a year as the emergency manager, a job that gives him sweeping powers over the bankrupt municipality. This is, according to The Times, “a pay cut.” The Detroit Free Press reported back in September that Michigan Governor Rick Snyder, whose law school education at the University of Michigan overlapped with Mr. Orr’s, is paying for Mr. Orr’s Detroit condo through his New Energy to Reinvent and Diversify Fund, which is honestly referred to as NERD. The condo costs $4,200 a month, according to the Free Press. Them’s New York prices! Oh, and speaking of nerds, Rick Snyder, if you’re unaware, looks like this.

The Times attempts to humanize Mr. Orr with this:

And however his life may appear to others—the classic suits and the state police security detail—Mr. Orr says simply that he sees himself as a part of Detroit. In the city’s churches, he says, he smells the Florida church his grandfather led, the old Bibles and the organs. Both his grandmothers had studied to the eighth grade and worked as maids.

Well. Did that convince you? Recall that Mr. Orr hired Christie’s to appraise the DIA’s collection, which deemed a portion of the museum’s holdings–the 2,800 pieces that were purchased with city funds–worth between $452 million and $866 million. A full appraisal is expected this week. (Detroit’s debt is measured in the billions–about 18 of them. The pension funds alone are about $3.5 billion.) Despite comments from the federal judge that ruled Detroit eligible for bankruptcy procedure that claimed “a one-time infusion of cash by selling an asset,” a reference to the DIA, would only delay continuing financial ruin, Mr. Orr has been persistent in his belief that the museum is a viable city asset that can be used to pay off creditors. This is what has made him so, uh, popular across the country, which has mostly taken the apocalyptic scenario of the DIA being sold off as an inevitability. (Hey, anything’s possible in Detroit. One New Year’s Eve I spent there, a guy with a nail sticking out of his bleeding forehead asked me, “Do you like to fuck?” Wish I was kidding!) Remember, this all started when Mr. Orr told the Free Press‘s editorial board, referring to the DIA’s art, “Let’s be clear. That’s a city asset.” Yes, everything is so clear.