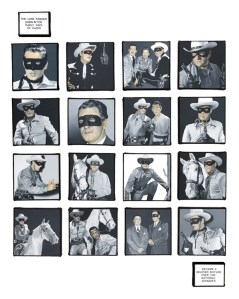 Dotty Attie paints the masks that can’t be pulled off. The found images she plays with simultaneously expose the sexual undercurrents of authoritarianism and social hierarchy and let out their air, resulting in an infinitely variable but strangely flattened libidinal vocabulary. Dominance is the subject, but which way is up? In a context of whips, chains, spanking and naked women, the Lone Ranger, posing in his white cowboy hat with black leather chinstrap next to his white horse in black leather bridle, looks weightless.

Ms. Attie adds flesh tones to an otherwise black-and-white palette, as well as a gauzy, unreal pink on cheeks and lips, making most of her characters—Tonto excepted—look as if they had been prepared for the camera by a pastry chef or mortician. Kitchen-tile-size oils are compiled into grids—although the grids are unfolded, for this show, into long lines bracketed by painted captions—or multiplied into series that use repetition, juxtaposition and close focus to sound the absolute performativity of the sexual and the psychological auras of the colors black and white. The more than 40 pieces titled Worst Case Scenario, for example, include an old woman face-down in a white-wash basin, two members of the Klan holding a puffy white dandelion, a topless woman with a napkin over her face, a man in a white ghost mask, a man and a woman holding handkerchiefs over their mouths, as if for gas, a facial mask with cucumber slices on the eyes and another, of cucumbers sliced lengthwise, that looks like a prehistoric skull, an alluring gray eye peeking out from white bedsheets, a woman pulling the black corner of the painting across her face, and a girl pointing an automatic pistol into her mouth. It’s a measure of the dislocating effect and cumulative unease that the most disturbing single image is of a man holding a baby while smoking a cigar. (Through Dec. 21)