TRENTON – The former Port Authority of New York and New Jersey official at the heart of a lane-closure fiasco in September has been subpoenaed by the Assembly Transportation Committee Chair John Wisniewski.

David Wildstein, who quit recently as did his boss, former state Sen. Bill Baroni, has been subpoenaed to appear before the Assembly panel to answer questions about the George Washington Bridge lane closures.

Wildstein, a former PolitickerNJ editor, is ordered to appear Jan. 9 before the committee.

Wildstein quit earlier, saying at the time he had intended to depart in 2014 anyway.

Baroni had appeared voluntarily before Wisniewski’s panel, and said at the time no one else would appear.

N.Y. authority appointee Patrick Foye and other officials did eventually respond to subpoenas and contradicted assertions of Baroni that the purpose of the Fort Lee lane closures was to conduct a traffic study.

Foye was succinct that there was no study.

After that, Baroni resigned.

After that, Wisniewski subpoenaed documents from numerous current and former Authority officials, leading up to the announcement today of Wildstein’s subpoena.

“Today’s subpoena is based, in part, on information already gathered from the subpoenaed documents,” Wisniewski said in announcing the subpoena. “This will be a thorough and complete investigation focusing on how this abuse of power and threat to public safety came about.”

Gov. Chris Christie has continually dismissed the controversy over his two now-departed appointees.

“When not making traffic cone jokes and shrugging off the threats to public safety these lane closings created, Gov. Christie has made clear that this decision was largely the fault of Mr. Wildstein,” said Wisniewski.

“So as we continue gathering information on this matter the time has come to hear directly from Mr. Wildstein. The public deserves answers as to how this decision was made, who was involved and its true purpose. I look forward to Mr. Wildstein providing insight into this decision that put public safety at risk and raised serious questions about this vital yet dysfunctional agency being used for political vengeance.”

Published reports have said the closures were retaliation for the Fort Lee mayor not endorsing Christie for re-election. Christie has maintained he had no involvement with lane closures. 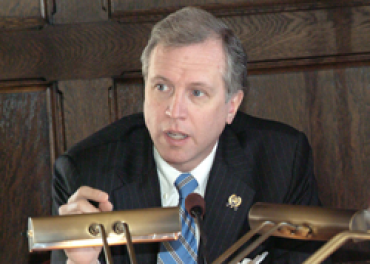