“I gave it a great deal of thought and decided that I’m in a position to do some significant things in areas like mental health, infrastructure, transportation and healthcare and I want to work on these issues,” said the senator. “I believe I have greater opportunities to produce real substance in Trenton right now than I believe I would as a freshman member of the minority party of an institution that is not getting much done, that is, frankly, maybe toxic.”

The mild-mannered senator labeled – some might say preposterously given his wonkish ways – as “obstructionist” by Gov. Chris Christie, Gordon didn’t rule out a future Congressional run.

Close to U.S. Sen. Cory Booker (D-NJ), who grew up in Bergen County where the district is concentrated and appears on the ballot next year,he was tempted to run this time but instead wants to focus on his work in the state Senate.

That leaves 31-year-old attorney Roy Cho of Hackensack as the lone Democratic Party pursuer of Garrett.

Gordon said he wasn’t ready to issue an endorsement but plans to back the Democratic nominee when one exists.

“One thing that really made me look at this was the opportunity to retire Scott Garrett, whose views are at odds with a majority of people in Bergen County,” Gordon said. “We’re not going to end the dysfunction until we understand that Congress is a place where conflicting views must be accommodated. We will not get far if we believe that people serving there will not budge from their hard-edged philosophies, but this is not the time for me to do it.” 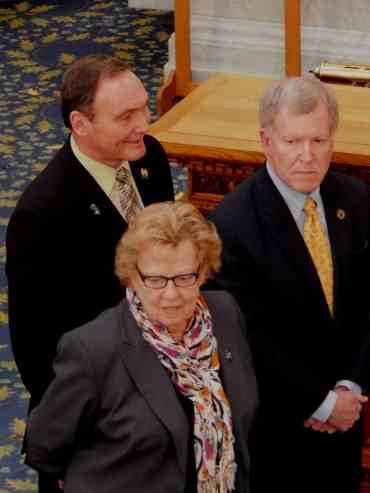