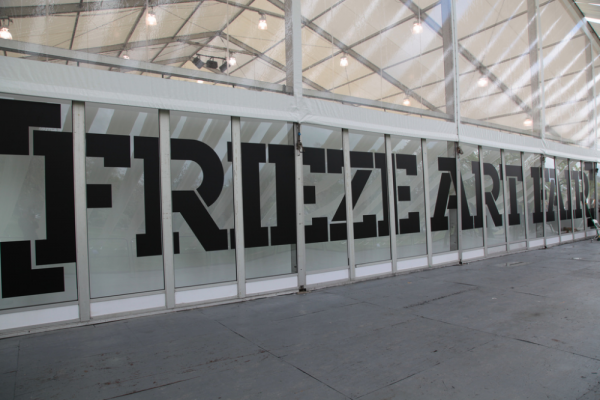 Frieze New York is returning for its third edition in 2014, drawing 192 galleries from 28 countries to its big, bright white tent on Randall’s Island from May 9 to 12. The London-born fair appears to have taken hold in its new city, with a consistent number of local galleries returning—53 New York dealers will show at the next edition—along with some notable newcomers. “What’s nice to see is we’ve added Barbara Gladstone this year, who’s a great, stellar foundation of a community in New York,” Frieze co-director Amanda Sharp told The Observer. Among the New York galleries coming back for another year are Luhring Augustine, Jack Shainman, Paul Kasmin and Marian Goodman, who basically won Frieze New York 2013 by staging a Tino Sehgal performance piece in her booth.

“We’ve definitely got more America and I think a comparable number of New York [galleries], so I think that’s a very good sign that we’ve got more coming from outside of New York than we had last year,” said Ms. Sharp of the dealer distribution, noting that the number of West Coast galleries is growing. “With San Francisco in particular, we’ve seen an uplift.”

The upcoming edition of the fair sadly won’t feature a Sculpture Park, the collection of outdoor works that Tom Eccles, executive director of the Center for Curatorial Studies at Bard College, has curated for the past two years. Though Paul McCarthy’s behemoth Balloon Dog (2013), the most conspicuous piece in the park last year, was a spectacular part of the fair landscape, Ms. Sharp said some pieces struggled with size issues. “I think that there’s something about scale and the tent that is very challenging for works put in close relief to it,” said Ms. Sharp. The grassy outdoor space will not go unused. According to Ms. Sharp, Frieze Projects—ambitious works created specifically for the fair—will spill out of the tent.

Cecilia Alemani, director of the High Line’s arts programs, is returning to curate Frieze Projects and Frieze Sounds for a third year. While full details on what she’s planning won’t be announced until early 2014, Ms. Sharp said Ms. Alemani “has a few more projects up her sleeve this year than last.” At least one of these will be a reprisal of a historical piece, as she has done in past years, resurrecting Gordon Matta-Clark’s and Carol Gooden’s artist-run restaurant Food in 2013 and a John Ahearn casting project the year before. This one should be a real showstopper. “Many, many museums have wanted to revisit it, but it’s never been redone before,” said Ms. Sharp, stopping herself from giving any more hints. Let the betting pools begin.

The Frame section of the fair, which is dedicated to solo presentations by galleries under eight years old, is getting a new adviser. Rodrigo Moura, who helped shaped Frame for the fair’s first two editions, will be succeeded by Raphael Gygax, curator at the Migros Museum, Zurich, who will work with returning New York-based curator Tim Saltarelli. “I think it just generally reaches a point where people are keen to move on, from both sides,” said Ms. Sharp of the change. “It’s good to bring someone with a new set of relationships and a new eye in, just to make sure things don’t become staid or repetitious and to make sure that you’re never open to any of that potential concern that you’re ossifying, that you may have favorites. That you really do keep it fresh, I think is really critical.”

Ms. Sharp highlighted the high number of solo presentations slated for the main section of the fair. Rome’s Galleria Lorcan O’Neill, for instance, will show Eddie Peake, “which I think is very timely based on the success he had at Performa this year” and London’s Wilkinson gallery will exhibit work by Joan Jonas. In Focus, a section dedicated to galleries founded in or after 2003, NoguerasBlanchard (Barcelona) will bring work by Wilfredo Prieto, Kate MacGarry (London) is filling her booth with B. Wurtz, Tanya Leighton (Berlin) will stage a historical presentation of Bruce McClean and Ancient & Modern (London) is planning on bringing “very substantial” works by Norbert Prangenberg. Additionally, espaivisor (Valencia) is showing Sanja Ivekovic, who was the subject of a retrospective at the Museum of Modern Art in early 2012.

“One thing that we’re seeing really trending actually through this year’s fair is quite a strong feminist trend,” said Ms. Sharp. “There are a lot of very, very interesting female positions being shown.” Among them is a collaborative project cooked up by New York galleries Elizabeth Dee and Broadway 1602.

The number of countries represented by this year’s exhibitors is slightly down from the 2013 edition, which drew participants from 32 countries. The next Frieze will feature galleries from 28 nations, losing galleries from Argentina, Ireland, Russia, Australia and New Zealand. The fair will gain voices from Mexico, which was not represented in 2013, with the arrival, from Mexico City, of Kurimanzutto (which participated in 2012 but not 2013) and Proyectos Monclova (which is new to Frieze and will appear in the Frame section). Several international galleries that joined last year like Shanghai’s Leo Xu are returning, while others, such as Cape Town’s Whatiftheworld, are taking a break.

The next edition of Frieze aspires to be the most accessible, with the addition of subsidized tickets. Over 1,000 tickets priced at $10 will become available in late February on a first-come, first-served basis to students, who had to pay $26 to enter the last fair. “New York is such a richly deep culture,” said Ms. Sharp. “There’s so much to see in this city and so many wonderful things, but the fair is probably the most international art event that happens here, certainly in terms of the quality of the galleries participating. It does give people who are interested in seeing contemporary art an amazing snapshot of what’s happening in the world today.”