With just over three weeks to go before he takes office on January 1, Bill de Blasio is taking things slowly.

The mayor-elect has yet to announce the vast majority of the most important hiring decisions of his administration. Indeed, Mr. de Blasio has yet to even begin interviewing commissioner candidates for many major agencies, according to a source familiar with his transition progress.

At this point, Mr. de Blasio’s 60-member transition team has been broken up into topic subcommittees that have been meeting to discuss potential commissioner options, sources said. But while transition staff have started reaching out to experts in their respective fields for names and to gauge interest, they have yet to begin the formal interview process for many key posts. Mr. de Blasio said yesterday nominations for the important post of schools chancellor, for instance, were still coming in.

Mr. de Blasio, thus far, has taken a slow and steady approach when it comes to his appointments. Last week, he made his first round of announcements, picking long-time government egghead Anthony Shorris as his first deputy mayor and former Police Commissioner Bill Bratton as his top cop. Emma Wolfe, a longtime aide and former labor organizer will serve as his director of intergovernmental affairs.

But while the clock is ticking, Mr. de Blasio’s progress is actually pretty typical–as long as he picks up his pace soon. By this time in 2001, Mr. Bloomberg had appointed a trio of deputy mayors and his police commissioner, waiting until the end of the month to name most of his picks.

“It just takes a long time to get the right people,” then Mayor-elect Bloomberg was quoted by the Daily News at the time.

(Mr. Bloomberg spent the weeks after his inauguration keeping a low profile and taking trips to Israel, Dominican Republic, Puerto Rico and Washington, D.C. By this time in 2001, he had failed to make any major policy speeches or give any lengthy interviews; press reports faulted his advisers for rarely make him available for questions.)

The bevy of Mr. Bloomberg’s appointments came in the final week of December, after Christmas. On December 27 and 28 came two batches of major appointments, including Daniel Doctoroff in the crucial, post-9/11 post of “deputy mayor for economic development and rebuilding,” and commissioners for the Human Resources Administration, Department of Consumer Affairs, Department for the Aging and his director of communications.

But it was clear that Mr. Bloomberg was feeling the time crunch pressure. As he announced his final round of picks, Mr. Bloomberg apologized for taking so long “to get it all done,” according to a New York Times report that ran the next day. And as he scrambled to fill jobs before the new year, Mr. Bloomberg told reporters he would recommend a revision to the City Charter to extend the period between Election Day and inauguration, suggesting pushing the swearing-in back to January 20 or even February 1 to give the incoming mayor more time.

“The seven weeks is too short,” he was quoted by the Times as saying. ”I’d always like to have more time.”

Former mayor Rudy Giuliani, however, was even slower. According to press reports, in 1993, when Mr. Giuliani was elected, it reportedly took him until Dec. 17 to name all of his deputy mayors. He took longer even longer for commissioners, failing to name a single agency head other than his police commissioner, Bill Bratton, until December 20. His chief of staff announcement came on December 23, according to the Daily News.

His predecessor, David Dinkins, moved quite a bit faster, naming all four of his deputy mayors by the first week of December, according to the News. Nonetheless, the majority of his commissioner appointments came after Christmas–with a whopping two-thirds of major posts unfilled on Inauguration Day, the News said.

It appears Mr. de Blasio may take a similar approach. Recently, Mr. de Blasio left open the possibility that vacancies will remain not just after he’s sworn into office, but well into the new year.

“Let me say again, I want to reason with everyone here, this is a work in progress,” Mr. de Blasio told reporters after making his first announcement last week. “It should be a work in progress. We’ve got a month ahead and then every transition continues on into January and even sometimes February.”

“There is always a mad rush at the end,” former Mayor Ed Koch reflected to the News as Mr. Bloomberg was preparing to take office. “It’s always the same story.” 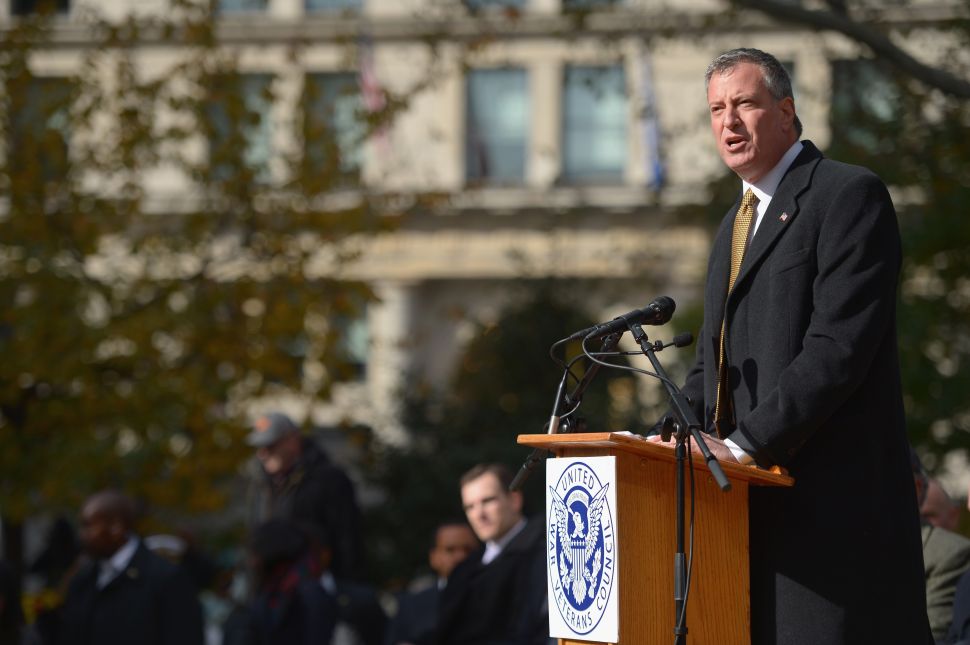