Incoming Police Commissioner Bill Bratton this morning tried to turn the page on soured relations between police and many minority communities, promising “freedom and equality for all” in his first public appearance since his appointment.

Mr. Bratton, who also served as top cop under Rudy Giuliani, vowed to “get it right” in a city where many communities of color feel under siege following a dramatic spike in stop-and-frisks that rarely lead to arrests. He was speaking with Mayor-elect Bill de Blasio in front of the Rev. Al Sharpton’s National Action Network at a memorial for the late anti-apartheid fighter Nelson Mandela in Harlem.

“As we go forward in this city, my commitment to you and of this mayor is that there will be freedom and equality for all,” Mr. Bratton told the room, which was packed with reporters and elected officials. “And our commitment to you is your police force in your city will be respectful. It will practice what Mandela preached: freedom for all, respect for all, compassion for all.”

“My promise to you is we will get it right in this city,” added Mr. Bratton, to applause.

The event was a powerful symbol for Mr. Bratton, who had a troubled relationship with Mr. Sharpton when he worked for Mr. Giuliani back in the 1990, when tensions between police and communities of color ran high. Mr. Sharpton released a notably cool statement on Thursday in response to Mr. Bratton’s re-appointment, noting the “very distant and adversarial relationship” the pair once shared.

But this morning, Mr. Sharpton focused instead on Mr. Bratton’s time as police commissioner in Los Angeles, where the city’s top cop worked closely with NAN’s L.A. chapter on youth violence and worked to repair police-community relations–an effort, Mr. Sharpton admitted, first took him by surprise.

“They kept telling me, ‘The police chief is really trying to bring the city together.’ And–you know me–I said, ‘Who? Bratton?!” he recalled to laughs. “After about a year of everybody working together and crime going down, and they were saying, ‘This thing is working.’ I said, ‘You talkin’ bout my man Bill.”

“So we’ve had our good days and bad. But I don’t want the media to act as though that it’s been one-dimensional,” he said, stressing the need for both respect and public safety. “We want not only a city that doesn’t profile us, but we want a city of no crime and no violence because just like we are stopped disproportionately, we suffer crime disproportionately.”

Mr. Sharpton also sounded a note of caution, which he framed in terms of Mr. Mandela’s death.

“You cannot mourn Mandela and then profile his grandchildren. And you cannot mourn Mandela and engage in gun fighting. Mandela did not go 27 years in jail for you to be gangbanging,” he said. “We must seek to strike that balance in New York: the balance of protecting our rights and protecting lives, of having equal opportunity, equal access to quality education … It is a balance that may be difficult, but is a balance that we must strike.”

For his part, Mr. de Blasio, who wore a bright purple tie that matched Mr. Bratton’s, praised Mr. Mandela, who’d visited the city in 1990 back when Mr. de Blasio was serving as an aide in the Dinkins administration. The mayor-elect described the death as “profoundly personal. He was the definitional progressive figure of our times. He was the exemplar,” he said. “He was like a father or a grandfather in one way for all of us.”

“Now it’s up to us to live in his spirit,” he continued. “And so as I think of the days ahead in this city–I think Rev got it exactly right–we’re gonna work for social and economic justice every single day … we’re not going to accept ever-growing inequality… And we’re gonna keep this city safe, but at the same time, respect the people of every community of this city while we’re doing it.”

He also stressed that Mr. Bratton shared his vision, to his core.

During their conversations, he told the crowd, “Commissioner Bratton said something simple. He said, ‘You can’t break the law to enforce the law.’ … When he talks about constitutional rights, he talks about it with a reverence, almost a spirituality. That immediately drew me to his vision.”

Messrs. de Blasio and Bratton refused to take questions from the press after their remarks, but as they dashed out a back door of the building to waiting black SUVs, Mr. Bratton was approached by Brooklyn City Councilman Jumaane Williams, one of the city’s most vocal critics of stop-and-frisk.

“I’ve heard a lot of good things about you and I think that we can find a lot of common ground,” Mr. Bratton told Mr. Williams.

“I think so,” Mr. Williams responded, sticking to his talking points by saying  he was “cautiously optimistic” about the city’s soon-to-be top cop.

“We’re looking forward to meeting and going forward,” he said. 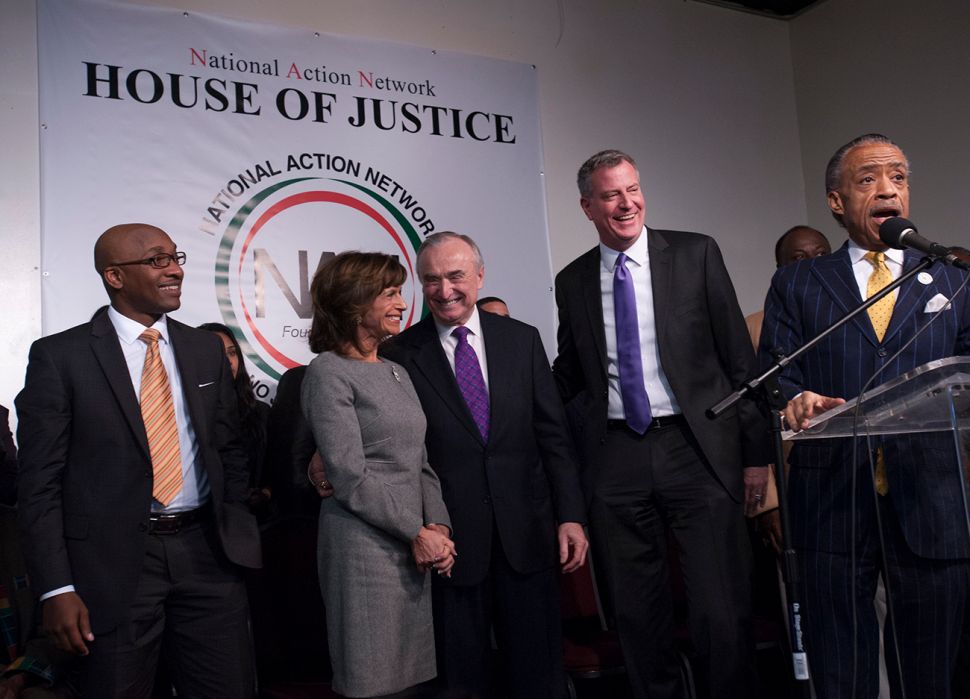