Harlem Councilwoman Inez Dickens is refusing to drop her bid for City Council speaker, despite a deal that appears to give her rival, Melissa Mark-Viverito, the votes to win.

According to a spokesman, the councilwoman believes she can better represent her district by staying in the race.

“The handwriting is obviously on the wall and we all live in the very real world. But that said, as the only African American member from Manhattan come January 1, Inez wants to makes sure that her district and her community’s voice remains part of the process, so she’s going to remain in for now,” Michael McKeon, the spokesman, told Politicker this evening.

Mr. McKeon declined to say whether Ms. Dickens would favor Ms. Mark-Viverito or East side Councilman Dan Garodnick, whom several other candidates, including Queens’s Mark Weprin and the Bronx’s Annabel Palma are rallying around along with their county leaders.

“For now her main priority is to make sure her community’s voice is heard and is respected as part of this process,” Mr. McKeon said.

Ms. Dickens was once considered a front-runner in the race, but saw her chances dim when current Speaker Christine Quinn, whom she had endorsed, lost the mayoral primary.

Another candidate in the race, Brooklyn’s Jumaane Williams, announced his withdrawal this morning and threw his support behind Ms. Mark-Viverito. A spokesman for Jimmy Vacca, another candidate, did not respond to requests for comment. 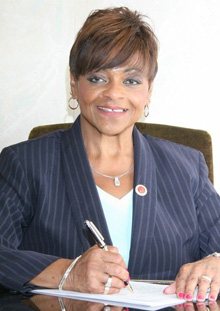