“We’re going to be engaged in aggressive, intelligence-based community policing,” said Jeffries, the former state Assistant Attorney General, to a crowd of nearly 75 people gathered outside of his new West Ward headquarters on Sanford Avenue in the city’s Vailsburg neighborhood. “We need to re-invest in more officers, and we need our officers to have a more organic relationship with our communities. We need to be walking these neighborhoods, knowing the clergy, knowing the community leaders, knowing the parents, and knowing the residents so we can really identify those folks who are up to no good in our community. And then we’re going to target those people.”

Jeffries was clearly talking about public safely, a highly relevant topic in New Jersey’s largest city. But Jeffries could have equally been talking about his need to target relevant voters as he seeks the mayor’s seat.

Jeffries has to this point raised the most funds, with close to $600,000 in his campaign war chest. But all of his rivals, including Ras Baraka, Anibal Ramos, Jr. and Darrin Sharif, the councilmen of the South, North and Central Wards respectively, have neighborhood bases to gain their votes from. In particular, Baraka and Ramos have been engaged in classic Newark political street theater in recent weeks, getting labor endorsements and running holiday charity drives, hoping to display both organizational force and street credibility, while Jeffries has been relatively quiet.

While a coat and toy drive took place behind him at his West Ward headquarters, Jeffries questioned the idea that he was making up for lost time.

“We’ve been canvassing throughout the city for over a year. We have support in every ward, in every neighborhood. We have support everywhere,” Jeffries told PolitickerNJ.com, noting he was on tour Saturday to his other four ward headquarters across Newark. “If [the other candidates] have evidence that proves their organizational strength, I’d love to see it. We have very strong organizational support in all parts of this city.

“We have a record,” added Jeffries, who referred to his oversight of  state law enforcement initiatives that he asserts led to a 26 percent reduction in recidivism for ex-offenders, doubled the graduation rate for juvenile offenders and reduced violent crime throughout New Jersey three years in a row. “A lot of folks have rhetoric and talk, but they don’t have performance.”

A critical issue that came to the forefront this week in Newark politics is the question of proposed plans for serious changes in the city’s public school system.

Elements of the proposed plan that surfaced this week reportedly include the shutting-down or alteration of dozens of schools throughout the city in an attempt to reform and realign the Newark Public Schools System. Part of those plans includes the replacement of public schools with charter schools.

Jeffries, a South Ward resident who lives blocks away from Weequahic High School, underlined his stance about the proposed school reorganization plan.

“I’m sitting down with [Newark Public Schools Superintendent Cami Anderson] in the next few days, and I want to get a full briefing from her,” said Jeffries, a former Newark Public Schools Advisory Board member. “I’ve always said that I believe closing schools should be an absolute last resort. There are so many others ways in which we can improve schools that are struggling. I’m from the Weequahic neighborhood. I grew up in the neighborhood, and I live in the neighborhood. Weequahic High School is a cultural icon in our community, and it has to be respected. Anything we do has to be reflective of that respect.”

While Jeffries attempts to drum up support for his campaign inside of Newark, his efforts have reportedly drawn interest outside of the city.

When asked about the sources of his support, Jeffries said that his campaign is taking a wide-ranging approach.

“With our campaign, we meet and talk to everybody,” Jeffries said. “A lot of people ought to be interested in the City of Newark. We’re not going to thrive and be the world-class city that we ought to be if we build a wall up around the city and think we don’t want to partner and collaborate with other folks. We want, and will seek, support from anybody and everybody who wants to help us move Newark into a brighter and bolder future.

“If there are some leaders who want to build a wall up around Newark, and want to stiff-arm external folks who may want to collaborate with us, they are actually a part of denigrating Newark,” Jeffries added. “For us to have a brighter future, we have to collaborate with external players as well.” 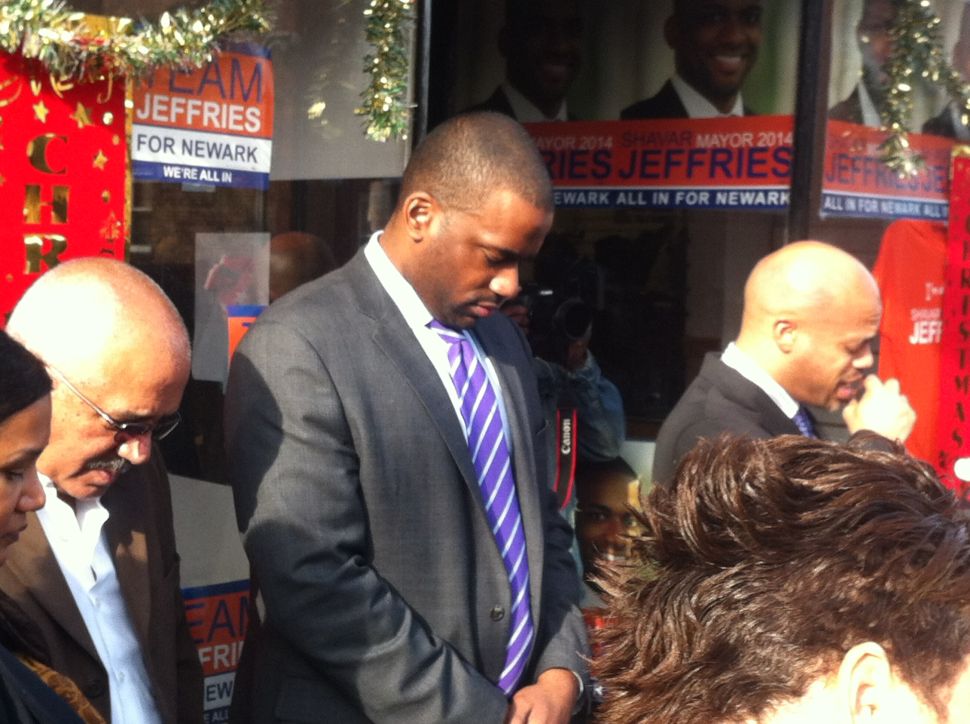