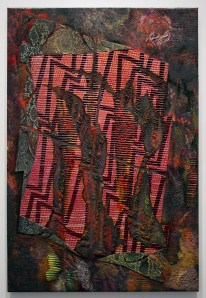 Jonah Koppel uses markers, Wite-Out and leopard-print screen tone to tap the greasy fluids of his subconscious onto the pages of a small sketchbook. Displayed on hinges to emphasize that dreams know no front or back, and with the cinematic framing of a graphic novel but no overarching story, the intensely worked drawings, all untitled and less than six inches high, include screaming mouths, transsexual rock singers, purple skies, obsessive shading, pendulous breasts, leashes and whips, serpentine penises, lightning, slavering, nunchucks, eye patches, a ghastly orange Mt. Rushmore, an American flag with a peace sign in the canton, and a pharaoh playing the electric guitar.

As a context for his three handsomely ugly, mustard-gas-colored abstract paintings, Mr. Koppel’s drawings suggest that the flattened, democratic tolerance of post-Internet or post-post–hip-hop painting cuts in both directions. Genesis and Night Angel begin with forms from the precreation void and colors from Heavy Metal magazine, and Cyberwar with a tan chain-link pattern and fine gold pinstripes laid over a faded orange-red, the color of an old couch. All three paintings then erupt into two-and-a-half dimensions of muddy, interlocking planes. Mr. Koppel mixes pigment, and sometimes a sand-like substance for texture, into a synthetic polymer base that can be piled up into lumps, painted on through a mesh screen or raked with a notched squeegee into round ridges. In Cyberwar, those ridges form a slightly tilted open grid, dull copper or metallic hot pink depending on the angle from which you look at it, which sits behind but partially overlaps a greenish, sandy plane diving right. Waffle patterns, scrapes and a partial sneaker footprint—Mr. Koppel works on the floor—are shot through, in knifey triangular windows, with a fuchsia, blue and gray-green camouflage pattern, itself divided down the middle between matte and glossy halves. Figuration is no longer solid, and abstraction can’t purport to be spiritual: The whole world is translucently carnal. The bottom is marked with white flecks. (Through Dec. 8)