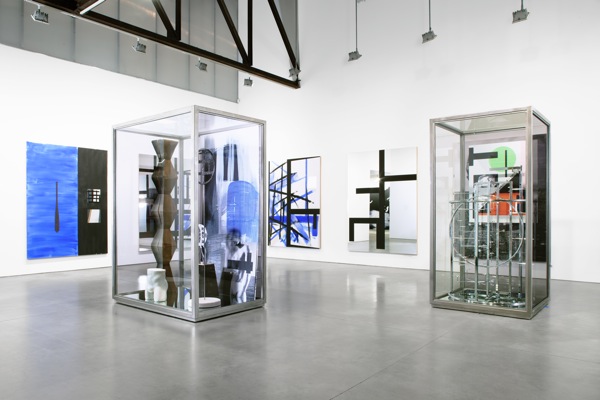 Josephine Meckseper’s new vitrines are very shiny. They have chrome steel frames, tall glass windows and mirrored floors. Some have fluorescent lighting, and some are more than 8 feet tall. As with much of the midcareer New Yorker’s earlier work, they feature found objects and sculptures—replicas of Brancusi’s Endless Column and other early-20th-century works, ads for Chanel perfume and 2(X)ist men’s underwear, mannequin legs for modeling stockings or shoes, the odd bathroom plunger—plus some bland little abstract paintings.

These look like the work of Hollywood prop designers intent on conjuring up almost comically slick contemporary art for a scene set in a gallery. They make mind-numbingly obvious and already well-established connections between the development of consumerism and early modernism. One might think of them as high-end luxury versions of the configurations of the quotidian and unusual objects that Haim Steinbach has been laying out on shelves for more than three decades, though they evidence none of his crackling, oblique wit, none of his preternatural sense for the hidden properties of objects.

Wan, generic abstract paintings provide an appropriately listless backdrop for these sculptures. Some are sumptuously outfitted with mirrors, or affixed with an image or object (a necktie, for instance); others are simply prints of wan, generic gestural abstractions, another exhausted idea that adds an extra layer of distancing and renders the project even emptier.

Ms. Meckseper has done far better in the past, with the spooky film tour of the Mall of America that she showed at the 2010 Whitney Biennial or with the funny faux oil pumps that she installed in Midtown last year. Even on view at Art Basel Miami Beach last week, these new vitrines looked woefully over the top. They’re all bling, no bite. (Through Jan. 18, 2014)