In an interview with The Pixies that I cut out (with actual scissors) from I don’t remember what magazine a million years ago, a reporter asked the band why Kim Deal doesn’t sing more Pixies songs. The Pixies’ Black Francis started to answer and Ms. Deal interrupted him with “I should! I have a lovely singing voice!” Back then, I thought of her the way I often think of other “secret weapon” band members (as I call them), the somewhat secondary songwriters like Dave Davies (the Kinks) or Roger Daltrey (that’s right, he wrote maybe four songs for The Who) or Tobin Sprout (Guided by Voices) or Sue Garner (The Shams) or Lou Barlow (Dinosaur Jr) or Ben Deily (The Lemonheads) or Gerry Buckley from that band America who wrote maybe the best line from any song ever: “I been one poor correspondent / I been too too hard to find / But it doesn’t mean you ain’t been on my mind.” Heck, throw in Kelley Deal from The Breeders (which I’m getting to…). These players aren’t considered the band leaders, they don’t necessarily write the most popular or most heard songs, but when they do step up, it’s a prophetic revelation.

Once upon a time I ate dinner at a second-floor restaurant in Gramercy Park with a group of people that included 4AD Records kingpin Ivo Watts-Russell and Black Francis (his real first name is Charles, so I’ll call him that from here on out). As our fawning waiter mistook me for Gretchen Mol and I tried to figure out who that was, Charles asked me why a certain curmudgeonly underground rock critic and fellow UMass alum didn’t seem to like him or his music. Of course, I exclaimed brightly, “Oh! That guy? He told me he thinks ‘Gigantic’ is one of the best songs on the planet right now!” Charles spat, “That’s a KIM song,” and I pretty much used my stupid mouth to eat food instead of my foot for the rest of the meal. Charles had inadvertently proved my secret weapon point.

Shortly thereafter, Kim joined forces with fellow secret weapon Tanya Donelly (ask me and I’ll tell you she wrote the best Throwing Muses songs) and recorded the album Pod as The Breeders. The rest is herstory.

Kim, with The Breeders, had a bigger hit with “Cannonball” than anything her first band ever recorded. Indeed, the NME called it 1993’s Single of the Year. LSXX, a deluxe anniversary edition of Last Splash, was released as a fancy three CD box set by 4AD this past summer. And since you’re into little 7” records like I am, you’re buying up everything from Kim’s new singles project. This Thursday and Friday we can all go to Webster Hall in Manhattan to see The Breeders—Kim Deal, Kelley Deal, Josephine Wiggs, Jim Macpherson and Carrie Bradley, but OH WOW, what if Tanya Donelly shows up too (not likely, I suppose, but yesterday I won some scratch on a scratch ticket so maybe it’s my lucky week)—play the albums Last Splash and Pod live in their entirety as part of The Breeders’ 20th anniversary tour! I hope Kim wears knee high striped tube socks, because that’s how I always remember her on stage from when I saw the Breeders back in the day.

There’s a wealth of Breeders and Deal Sisters stuff on the You Tubes, but since I’m almost as excited about Neil Patrick Harris playing Hedwig on Broadway as I am about The Breeders still existing, the link above is footage of Kim and Kelley doing a heartbreakingly tender acoustic version of my all-time favorite song, from Hedwig and the Angry Inch. Fast-forward to 3:09 to hear the tune, but then watch the whole thing because Kim and Kelley are enchantingly chatty introducing it. 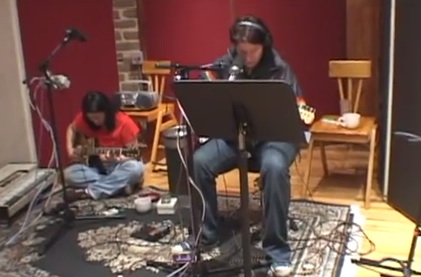