Among the list of Republicans not seeking to challenge U.S. Sen. Cory Booker (D-N.J.) in 2014 is a state lawmaker who previously sought the position.

State Sen. Joe Kyrillos (R-13) told PolitickerNJ he’s not interested in running another bid for the U.S. Senate seat. Kyrillos ran a failed bid for the seat against Sen. Bob Menendez (D-N.J.) in 2012.

“I’m out of the running,” he said on Tuesday.

He made the comments after another state lawmaker said any Republican seeking to challenge Booker should emerge within the next month if they want to mount a serious campaign against the Democratic incumbent.

However, Kyrillos suggested the time for many GOP officials to declare their candidacy may have already passed.

“If you have to raise resources, i.e., you don’t have your own resources, you really need to have started last year or the year before that,” Kyrillos said. “Whoever is thinking of doing it better not take a long Christmas break.”

Menendez beat Kyrillos by nearly 20 points, though the Republican hopeful had already raised more than $1 million by this time during his campaign, he said.

“It’s a very difficult endeavor in any state and it’s especially difficult for any Republican in this state where there’s a significant Democratic advantage,” he said. 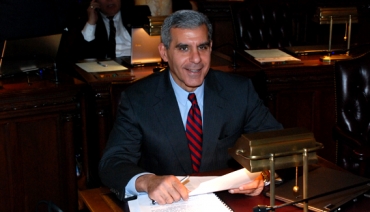