A Latino leader in the state and Gov. Chris Christie ally says Democrats will be to blame if New Jersey fails to enact a version of a DREAM Act.

Martin Perez, a Christie appointee and head of the Latino Leadership Alliance of New Jersey, wrote in an op-ed Latinos “will have no other choice but to conclude” that Senate Democrats played politics with the state’s version of the tuition equality bill when they added a financial aid component to the proposal.

Perez referred to the financial aid provision as “an insincere effort meant to kill the bill.”

Christie, who announced ahead of the recent statewide election that he would support an in-state tuition equality bill for undocumented students, declared recently he would not sign the Senate’s version of the DREAM Act.

Perez argued the Latino community “did not advocate or demand” the financial aid component be included and said the Legislature and governor’s office should work toward enacting a bill, not digging down in a “Washington style impasse.”

“After all, since 2003 the Democrats failed to move the bill when it did not contain a financial aid provision and they controlled both the legislature and governor’s office,” Perez wrote.

The blistering op-ed comes as both sides have dug in their heels on the state’s DREAM Act.

The Democratic-controlled Legislature made clear its intention to send Christie a final bill with both the in-state tuition and financial aid provisions, while Christie said he would not support the measure.

Other DREAM Act advocates – including other Latino groups in the state – have argued the fight over the financial aid portion is a red herring. They accuse Christie of reneging on a campaign promise.

The governor appointed Perez to the Rutgers University Board of Governors, which Senate President Steve Sweeney attempted to block. 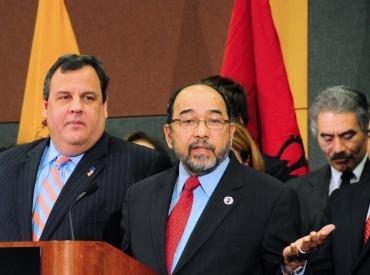