While taking lunch seems to be a dying privilege in NYC, there are still some New Yorkers who have time for leisurely midday meals. Last week, supermodel and entrepreneuse Petra Němcová invited us to lunch at Jean-Georges Vongerichten’s ABC Cocina, where we chatted about her recently launched sustainable home decor company, Be The Light, which is based on her extensive global travel.

“I grew up under communism, and we were not allowed to travel. That’s maybe why I’m so hungry for it,” reasoned the Czech beauty, who also serves as a humanitarian and cultural ambassador of sorts for her current country of residence, Haiti. (She has been linked romantically to Haiti’s prime minister, Laurent Lamothe.)

“I don’t speak about personal life!” she blurted.

Shindigger enjoys such intimate workweek lunches. When not drinking red wine, we like to polish off our vegan meal with a fine craft brew—often an IPA or Belgian Tripel.

At the first anniversary celebration of Sean Largotta’s Bill’s Food & Drink, a few days earlier, for example, Shindigger enjoyed a Bengali Tiger IPA from Sixpoint Brewery. Next, we sauntered to the newly opened Clement restaurant at the Peninsula hotel. Designed by Yabu Pushelberg, the modern dining rooms are perfect for discreet power lunching.

Shindigger washed down that meal with Left Hand’s dark and creamy stout.

“We are living in the most exciting time on the planet for great craft beer,” explained Clinton Hall’s celebrated beer guru, Leland Estes, at a recent tasting event. “And the best part is that it’s an affordable luxury.”

As for his seasonal favorites, he pointed us toward the St. Bernardus Christmas Ale, a 2009 Bruery Oud Tart and the Fantome Noël.

“Brewers are not limited by the grape or harvest,” Mr. Estes explained. “These additional flavors are what make beer a superior choice when pairing with food.”

Still, not all New Yorkers have time for elaborate midday meals—with or without beer.

“I get invited to them,” Girls star Jemima Kirke bemoaned at the American Museum of Natural History gala, beside her husband, Michael Mosberg. “My agent tells me to go to them. I’ll get an email saying, ‘You should meet this person.’ And I say, ‘Why?’ and they’re like, ‘Dumbass! Because you need to meet them!’”

Although Ms. Kirke does not drink, Martha Stewart, who was positioned near director Baz Luhrmann and Peggy Siegal, had plenty to say on the subject. “I like beer with Japanese food and sake. You never get drunk if you have sake and beer together,” she offered.

Saturday Night Live creator Lorne Michaels is another one who can’t spare his precious noontime hour. “I work too late,” he snapped, returning to his table, which seated the likes of Tina Fey, Will Forte and Seth Meyers. “I do drink beer, though.”

Last Monday, we hiked back to the American Museum of Natural History for the S.L.E. Lupus Foundation Life Without Lupus gala, which honored Mayor Michael Bloomberg and Simona and Jerome A. Chazen.

“We don’t have a cure yet, we’re on the way, but at least we have so much more information than we used to have,” said honorary gala chair Jessye Norman.

Did the five-time Grammy Award-winning soprano have time for fanciful lunches, we wondered?

“Sweetheart, I’m a working lady! I don’t have time to sit around having lunch in the middle of the day!”

Later that evening, U2, Anna Wintour and Burberry hosted a special screening of the Weinstein Company’s Mandela: Long Walk to Freedom at the Ziegfeld Theater.

“Just to let you know, my phone isn’t working,” some petrified assistant told Harvey Weinstein, as he stormed inside the theater a few paces ahead of Shindigger.

“Why is that?” the movie mogul asked in a tone that sent chills down our spine.

“The battery is dead.”

Based on the 1994 autobiography of the same name, the film stars Idris Elba and Naomie Harris. It’s worth seeing for the great performances and the history lesson.

“One of the biggest influences for me during that whole anti-apartheid movement was the dedication of U2,” Mr. Weinstein said onstage, in a friendlier tone, of the band that wrote the movie’s theme song. He then passed the mic to Zenani Mandela, daughter of the great freedom fighter, who introduced the band.

“In case you haven’t noticed, we’re not African,” Bono joked.

“It’s my second time seeing it,” he told us. “I think it’s going to be a strong Oscar contender in many categories.”

Mr. Posen comes off as a man who has nothing but time for leisurely lunches. But boy were we wrong.

“I have a chicken soup in my office,” he said. Beer was a no-go as well. “I drink water,” he disclosed, as we eyed a nearby cluster of attendees that included The Edge, John Varvatos and Gina Gershon.

Juliette Lewis arrived about an hour into the event. “I’m doing another Weinstein movie called August: Osage County,” she told us. “Harvey called and said come.”

And make no mistake: When Harvey calls, you come—morning, noon or night. 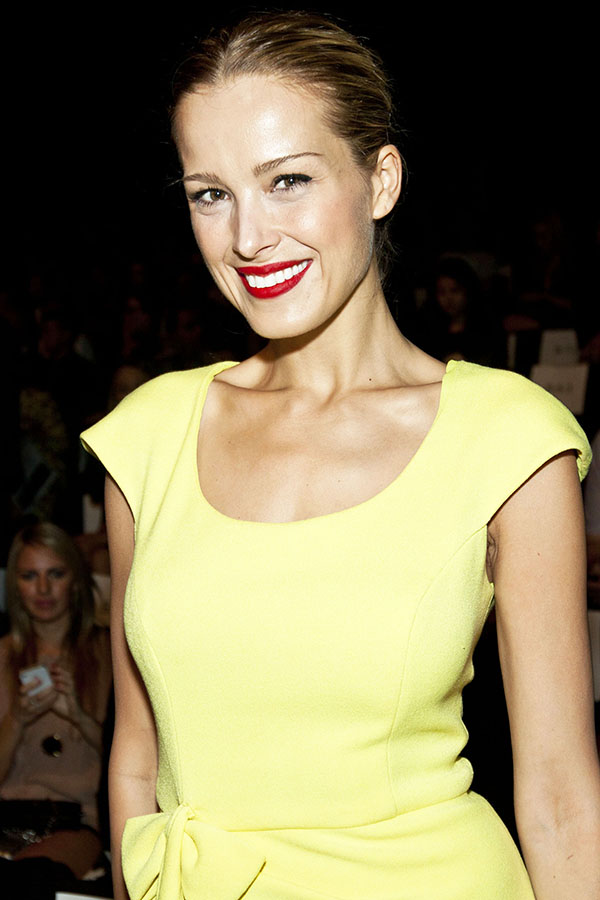