I am having trouble cogitating anything remotely linear or coherent about Marcellus Hall, even though I’ve spent so much time over so many years obsessed with his music and his artwork. I’m reminded of the first line of his 2012 album, The First Line, which is, “If I could just get the first line, the song would write itself,” and I’m like BINGO, I’ll just steal that… but then I get dizzy and fall over trying to loop the first line back around to the front over here.

How about we start with the new Marcellus Hall and the Hostages album Afterglow, and the CD release concert this Tuesday at Rockwood Music Hall, and the fact that you simply must see this man and his cohorts in a live setting in order fully to appreciate his unprecedented take on art-damaged Americana. Mr. Hall graduated from RISD, and he is a visual artist first, as well as a musician and poet. His story-telling is enchanting, and his lyrical wordplay is every bit as witty and complex as his musical arrangements. When I try to describe how, for example, he can write a straight-up country number that relies on clarinet instead of, say, pedal steel; or how he can put together a soundscape like “Wait a Minute” (on the new record) with layered rhyming raps aloft a wash of angel choir backup starred with bizarre sound effects anchored by a singalong chorus that sounds cribbed off Harry Nilsson, it might seem hopelessly pretentious. But for all the inventive experimental jibs and jabs, at its core, this is soul music. I promise it will make your mouth and your hips move.

Meanwhile, Hall draws pictures. His style reminds me a little of Ralph Steadman, but with a sort of weathered antiquated 1920s aesthetic. Faded watercolored line drawings of city scenes and whatnot that feel like something you’d find at the bottom of a hope chest in grandma’s attic. For the cover of The New Yorker not too long ago, he drew a bank of those Citi-bikes that made them look practically Turn of the Century (the last century, not this new one). He’s worked for The Wall Street Journal, The Atlantic, Time, The Christian Science Monitor, The New York Times and lots of others. He has self-published lavish collections of drawings. The aforementioned The First Line album was packaged with a luxurious 40-page book of illustrations. In March of last year Penguin published “Everyone Sleeps,” Hall’s childrens’ book about a squat little doggie who wanders around in search of ZZZs, presumably written for the babies who have resulted from folks seeing him play live (ahem).

I first saw Marcellus Hall fronting Railroad Jerk, maybe 1990. They played with Superchunk and I don’t remember who else but I do remember that I called the bands myself and pitched the show at Louise from CBGB. Loads of people showed up, and for a couple years after that Louise didn’t make me pay to get in, so that was pretty cool, even though when tales were told afterward, my ex-bf was named as orchestrator of the gig. You know, normally when there’s a record to set straight, I just shrug. Or maybe reverse the record’s turntable in case there’s a backmasked message from Santa. But in this case I want credit because that Railroad Jerk show was CRAZY HOT. I had never seen or heard anything like it. I’d heard delta blues, ratty punk, reedy vocals, bossy guitars, rolling toms, flexed sheet metal; I’d seen LES scum rocker types and I’d seen Opie from Mayberry RFD… I just had never experienced that particular combination, or ever heard a mouth tear into a harmonica quite like that, and was in no way prepared for how intensely compelled I’d feel to rush the stage and grind up against it.

There was another day a few years later, walking around Astor Place, scolding the urge to patronize that meat-on-a-stick cart on the corner outside Tower Records, since I knew from unfortunate prior experience that the seductive aroma is a damn liar because it’s not so much meat as it is greasy globs of gray gristle, when I was thankfully distracted by a trebly amped guitar noise and thumpy drumming on upturned rubbish pails, and then that voice which I instantly recognized as Marce Hall. He and Dave Varenka were on the sidewalk playing itchy blues-based tunes to a mesmerized gathering of passersby. The duo called itself White Hassle. The thing I remember most from another show is the raw sensuality they were able to inject into the cheesy Andy Kim 70s chestnut “Rock Me Gently.” And I remember thinking, maaaan, that incongruously nerdy red-headed kid could play a shoe string and a can of peas and the people would want to tap that.

Linked above is The White Hassle song “Life is Still Sweet” which is always the first thing I offer anybody who says they don’t know from Marcellus Hall. He writes the kinds of songs that, when I play them for friends, I rewind every other line and demand “Did you HEAR that??” which can be very annoying, so don’t make me come over there. Just go to the show (it’s FREE): Marcellus Hall and the Hostages, December 10, Rockwood Music Hall, 196 Allen Street, Manhattan. 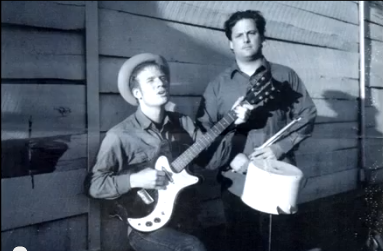