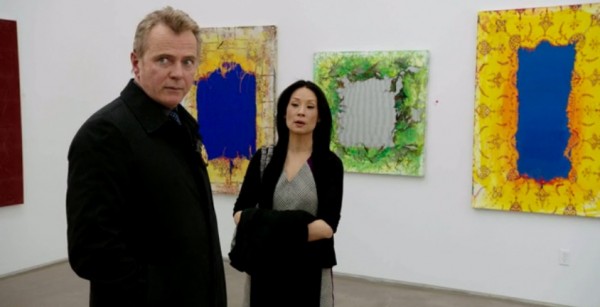 In case you were wondering, yes, folks, that was Zach Feuer’s gallery in last night’s episode of CBS’s Elementary. Maybe you were clued in by the text and lace paintings by Mark Flood? At one point, Sherlock Holmes notices that every third artwork in the gallery has a red dot next to it, indicating that it was sold. This looks fake to him, and, putting it together with some previous intel, he announces, “This gallery is a money-laundering front!” He also finds a dead body in a dumpster out back.

So, just to recap: it’s the real Zach Feuer gallery posing as a money-laundering operation posing as a gallery. With a body in a dumpster out back.

Fun stuff. We hope Zach made some money from the rental. P.S., Sherlock writers, no one uses red dots anymore.

You can watch the episode right here. (Fast forward to the final segment to get the sweet shots of the Feuer gallery.)

Also, did you know that Lucy Liu makes art? It’s not too bad.