Outgoing Mayor Michael Bloomberg made his final exit from City Hall this evening, passing through a receiving line of cheering staffers that stretched from the doors of City Hall and down the street, bidding farewell before taking the subway home for the very last time as mayor.

“If I wasn’t happy today, I don’t know what would make you happy. It’s a wonderful time and happy New Year to everyone,” the mayor told Politicker with a wide grin stretched across his face as he made his way through the crowd, shaking hands. The event kicked off with the release of gold balloons spelling out “1” “0” and “8”–heralding the exit of the city’s 108th mayor, who was greeted with shouts of “Bravo”, “We love you!” and “Happy New Year!”

Mr. Bloomberg’s 12-year tenure will end at midnight, with his successor, Bill de Blasio to be sworn in at 12:01 a.m.. But Mr. Bloomberg, who had seemed wistful about his exit in the weeks leading to his departure, tonight seemed both relieved to be passing the baton and proud of what he’d accomplished at City Hall.

After greeting his fans, the mayor headed to the City Hall subway station trailed by an entourage of press aides, security guards and media, who crushed onto an uptown express train heading to his home on the Upper East Side.

“Pressure’s on MTA,” said his press secretary, Marc La Vorgna, as the train pulled out of the station and the mayor posed for photos with passengers who wished him well.

Mr. Bloomberg, without boxes or briefcase, said he’d nonetheless cleaned out his desk, leaving it ready for Mr. de Blasio in the morning.

“Over the last few days, I’ve done a little bit each day,” he said, adding that he’d left just one thing behind for his successor: a note just like the one his predecessor, Rudy Giuliani, had left him wishing him good luck.

But he wouldn’t disclose the exact contents. “No, that’s a personal note from me to him,” he told Politicker. “It was a nice note, which Giuliani did for me, too … He also left a box of cigars, which I gave away to somebody.”

“There is no secret piece of advice other than do what you think is right,” he explained. “When you try to be somebody you’re not, it never works.”

Throughout the ride, which included a transfer at Grand Central Station, Mr. Bloomberg seemed especially excited about his New Years Eve plans–his first in 12 years that won’t involve presiding over the Times Square ball drop.

Asked what he was most looking forward to next, he responded: “Dinner tonight. It’s gonna be a lot of fun. We’ll have a party, Chinese food and then we’ll yell and scream at midnight. And then there’s a bar I always go to after midnight; every year we’ve gone,” he said, recalling one especially memorable celebration with the Clintons.

“Took Bill and Hillary one time. I left them at two in the morning, they were still there,” he said with a laugh.

After tomorrow’s inauguration, Mr. Bloomberg will head off on a 10-day vacation in Hawaii and New Zealand, which he said he was looking forward to. “Haven’t had one in 12 years, so it’ll be good. Whether I can go 10 days without getting frigidity, I have no idea,” he quipped. “We’re gonna find out.”

“I used to do a lot of that. Took my daughter to the Rogue River in Washington State and learned to do an Eskimo roll down the rapids,” he recounted, before explaining the move to an unacquainted reporter. “You roll the boat all the way over, upside down as you go down the rapids,” he said. “It was a good vacation. Emma and I had a great time together.”

But the best vacation he ever had, he said, was a trip to the Grand Canyon with both of his daughter–which he urged reporters to replicate.

“You should do that sometime. A week on a raft. It is the best. To see history and millions of years and different kinds of rock where erosion has cut the Grand Canyon. It’s really beautiful. It’s spectacular. God’s country,” he marveled.

Politicker also asked the mayor whether he really thought Mr. de Blasio–whom he has refused to criticize since he cinched the Democratic nomination–would do a good job. Before the election, Mr. Bloomberg was a harsh critic of the mayor-elect, warning his ideas would drive taxpayers from New York.

“Sure. Why not?” he asked back in earnest. “You never know if people are going to do. Nobody thought I was going to do a good job. I don’t know whether you think I did or not, but nobody did … Opportunities present ’emselves, crises, resources, liabilities and then how you react. If he tries to do what he really believes in, he’ll do a good job.”

Another reporter pressed the mayor about whether he knows what Mr. de Blasio believes in.

“I think he’s a really nice guy, cares about people. Very liberal, a lot of people would say that,” he said. “We’ll see, but I would think he’d  do a good job. And the city, he’s got a great hand to ride, so that’s a nice thing: balanced budget, record tourism, record schools, record low crime, record life expectancy,” said the mayor, ticking off his accomplishments. “Tomorrow’s gonna be an interesting day, it’s gonna be a better day than today. Everyday I’ve always thought that. And it’s just different” he said.

Before arriving at his stop, Mr. Bloomberg further recalled his own inauguration 12 years ago, when he was sworn into office with a bible held by his late mother. How did it feel, he was asked, knowing he was now responsible for all of New York City?

“You know there’s so many people involved and you do what’s right. And you can sit there and agonize and say, ‘Oh, I’m responsible for this or that,'” he said dismissively. “You do what’s right and then first responders are there and the people that make things happen are there. And when you fly into the city and you look down, you’ll say, ‘That’s a big city. It’s nice that people had confidence in you,” he said, betraying a hint of wonder.

As the train pulled into his 77th Street station, the mayor offered parting words for those who’d followed him home for the very last time as a public official. 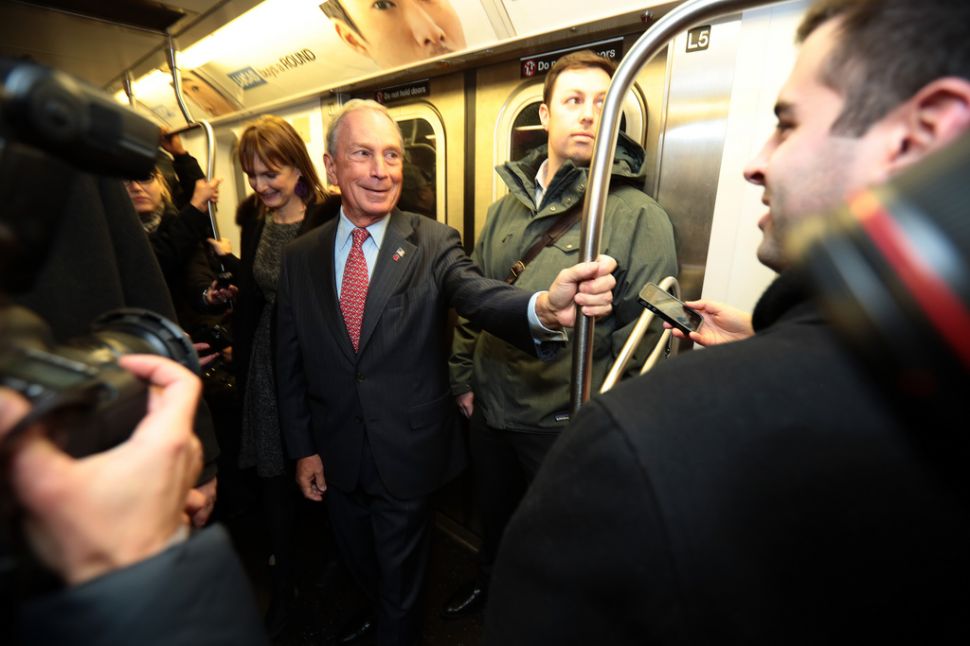