NEWARK – World leaders gathered on Tuesday in Johannesburg, South Africa to honor Nelson Mandela, a man who dedicated his life to fighting, and defeating, apartheid, a system of racial segregation embedded in his country’s laws and enforced by its police. When remembering Mandela, New Jersey’s leaders have mentioned a disturbing truth – the Garden State, in many ways, suffers de facto segregation that leaves its citizens separate but unequal.

It was Gov. Jim Florio who first coined the term “the two New Jerseys” in his 1990 inaugural address, the same year Mandela was freed from prison.

Nearly 25 years later, the hope of closing this gap is a dream deferred.

One example of the continuing divide between rich and poor New Jersey was underscored by recent studies released jointly by Rutgers-Newark and UCLA in October. Stark numbers presented in the reports indicate that in the 2010-11 school year, almost half of black and Hispanic students attended schools where fewer than 10 percent of the students were white, and many attended schools where there were essentially no white students. The Rutgers report from the university’s Institute on Education Law and Policy went so far as to call 191 of 1,597 schools statewide “apartheid schools,” defined as schools where 1 percent or less of the student population is white and where at least 79 percent of students are low-income, a “double segregation” marked by race and poverty.

The Rev. Dr. M. William Howard, Jr., pastor of Newark’s Bethany Baptist Church and the former chairman of Rutgers’ Board of Governors, met Mandela personally as a result of his decades-long anti-apartheid activism.

“New Jersey is arguably one of the most racially segregated states in the nation,” Howard said. “The question for me is not only race, but economics. Black people came to places like Newark, Paterson and Camden from the South to find work. That work has now disappeared, but those residents remained. The absence of capital, combined with a smidgen of racism, has produced the separation of families, decline in housing, increase in crime, and decline in the public schools in the cities. You will find black people living in some of the wealthiest suburbs in the state, provided they can afford the housing, and therefore have access to the suburban public schools.

“What we face today in our urban centers in our state is what Mandela still faced at the time of his death in South Africa,” Howard added. “If we were to go together now to South Africa, we would find millions of black people living in the same squalid conditions that they knew before Mandela was released from prison. And we would find certain highly educated, economically advantaged black people now living in opulent, suburban areas. I’m sure than Mandela recognized this, was not happy with this, and saw it as the long-term work of the South African government and society to correct this imbalance. New Jersey’s cities are largely populated by people who are unlikely to be able to access the modern economy. You cannot explain the horrific situation of segregation in the state of New Jersey only in terms of race. To continue to chip away at public schools by the introduction of charter schools to the point that they are almost tipping the balance in places like Newark is a big mistake. Education is not only the key to reviving our central cities – it’s the key to keeping our competitive edge in the world.”

Roland Anglin, director of the Joseph C. Cornwall Center for Metropolitan Studies at Rutgers, noted that the man seen as the father of South Africa would  take a similar guiding hand to the Garden State’s problems.

“Nelson Mandela would first say that we need to look at the things that created segregation in New Jersey, just the way he looked at the things that created segregation in South Africa,” Anglin said. “I think he would say that the thing South Africa did with their struggle, that we perhaps need to do, is to have a clear and decisive forum for reconciliation and move forward on the things that are still problematic. In Newark, for example, we’ve never come to a real reconciliation about the disturbances of the 1960s, and how society needed to do more to make sure that those who have been left behind have an adequate opportunity to progress so that balanced communities can be formed.

“We have the suburbanization of people of color in New Jersey, but they are being re-concentrated in pockets,” Anglin added. “Residential patterns are not happening in a way that promotes upward mobility. Change involves some level of enforcing fair-housing laws that challenges landlords who won’t rent to certain racial minorities coming out of urban areas. It also involves some level of incentives and social engineering. We don’t have that appetite as a society, much less as a state. Nelson Mandela would say that we need to cement the public will on all sides to make change, not just people in urban areas – that’s a doomed strategy. It is no one’s interest to have a poor, under-fed class of people who don’t have access to opportunity. It is in everyone’s interest that they participate in the public life and economic life of this state and country.”

For her part, Assemblywoman Grace Spencer (D-29) recalled protesting against apartheid during her college years. Many commentators have observed that there were two distinct periods in Nelson Mandela’s career: a confrontational period where he advocated armed struggle against apartheid, the other a more conciliatory period after his release from prison that smoothed the way to majority rule in South Africa. Regarding what kind of public leadership is needed to end de facto segregation in New Jersey, Spencer suggested the adoption of a hybrid tone.

“The person who is rambunctious and defiant begins to call attention to de facto segregation in New Jersey,” Spencer said. “But you also need the person who is more conciliatory who can bring people together and mend the wounds of the problem. I don’t think apartheid would have ended if it wasn’t for the rambunctious Mandela, and I don’t think there would have been such a good transition without the conciliatory Mandela. You need both.”

For the man who encapsulated the concept of two New Jerseys, what must be done to end de facto desegregation in the state is clear.

“Nelson Mandela would feel a need to speak out and point out the deficiencies that exist. We still do have two New Jerseys. Things have changed a bit, but only for the worse,” Gov. Florio told PolitickerNJ.com. “The middle class is now feeling threatened by economic problems as well. It’s going to take policy changes to make us a much more egalitarian society. Mr. Mandela would be out in the forefront trying to get those changes made.

“You need leadership that is willing to tell people things that they don’t want to hear,” Florio added. “At this point, there are no good options. It’s the difference between losing a finger and being decapitated. During the gubernatorial campaign we just went through, neither of the candidates, nor the press, talked about the overwhelming fiscal problems we’re going to have in New Jersey in the coming years. That’s because if you talk about it, someone is going to ask you what you’re going to do about it. We all know poverty exists. But somebody’s got to start talking about it. Somebody’s got to be out front. Nelson Mandela is a good example of someone who was willing to take on things that were much more burdensome than things that we experienced. If he was willing to do that, then we have to have people who will at least raise issues for debate.” 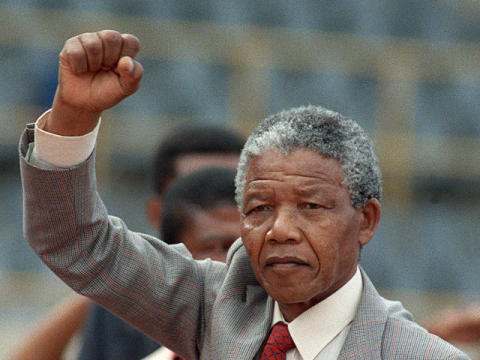