Replete with a chorus, a celebrity senator and an adoring, well-heeled audience, Mayor Michael Bloomberg’s final speech to the Partnership for New York City this morning was a celebration of his legacy, controversy not included.

Mr. Bloomberg spoke to the influential pro-business group in the lobby of the Barclays Center in downtown Brooklyn, one of the major developments he spurred during his 12 year tenure, extolling how far, in his own eyes, the city had come from when he took office in 2002. It was his second legacy-burnished speech in two days–he made a similar address in front of the Association for a Better New York yesterday. In both, Mr. Bloomberg received lengthy standing ovations.

“The zeitgeist was, everybody was going to leave New York City and nobody was ever going to live downtown again,” Mr. Bloomberg said, noting the business climate after the September 11 attacks. “When they write the history books, not the newspapers, when historians rather than journalists get a chance to analyze what we’ve done, those kinds of things are going to be most important.”

Mr. Bloomberg, who will leave office on December 31, included several barbs for the press, which he implied had misrepresented his legacy. He said that, during his tenure, crime plummeted, people became healthier and New York City grew attractive to a young professional class that helped revitalize the five boroughs.

Repeatedly, Mr. Bloomberg and his allies pointed to the Barclays Center, a glittering basketball arena that drew fire from locals for the tax breaks it reaped and delays in constructing promised affordable housing, as one example of the types of developments that can spur transformative economic growth.

“We also have to think big and start those things now where they’re gonna be there, be delivered for eight to 10 years from now,” he declared. “It’s the big infrastructure things, the big ideas that really make a city what it is … it’s very frustrating when people don’t understand the difference between New York and these other cities. We complain about small things and they are really small when compared to the rest of the world.”

“No matter what you do, not matter what hand God has dealt you, you’re probably better off living in New York City than anywhere else,” Mr. Bloomberg continued, using the example of the city losing its bid for the 2012 Olympics to London to illustrate the point. “We were gonna finance the Olympics with private money. London used billions and billions of dollars in public money … But we avoided having a really big problem because raising that kind of money during the economic downturn would’ve been very hard to do and yet we really built most of the things that we would’ve gotten out of having the Olympics here.”

Though his stance toward Mayor-elect Bill de Blasio has notably softened in recent months, Mr. Bloomberg still managed to take a swipe at one of Mr. de Blasio’s central campaign tenets: that the city’s yawning income inequality is a crisis that must be rectified.

“People keep saying, do something about income inequality,” Mr. Bloomberg said. “This is becoming a magnet for the wealthy people in the world and the people who create jobs and will have investments that will grow and that’s great. It gives you a number that looks bad.”

The mayor, who has had his share of clashes with local media throughout his tenure, capped off his speech with one last dagger aimed at the city’s scribes.

“In my first time in office, I think there was a reporter for Newsday who wrote a story, ‘It’s an outrage, the mayor is taking the subway to work every day. What happens if he gets trapped down there?'”

“You don’t need to know anything else, good-bye, thank you,” he added, walking off stage. 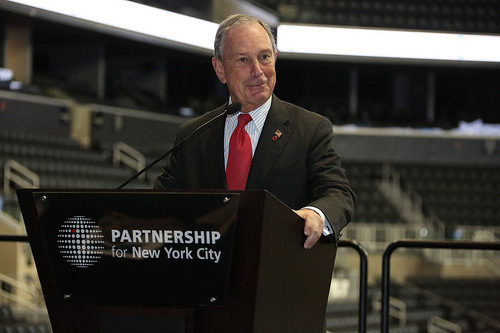