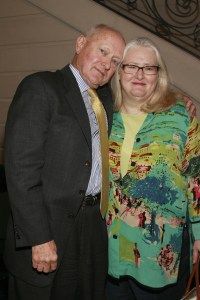 Michael Findlay, director at Aquavella Galleries has been elected to the board of directors of the New York Foundation for the Arts.

The New York Foundation for the Arts (NYFA) announced today that Michael Findlay, a Director of Acquavella Galleries, has been elected to its Board of Directors effective immediately. Findlay was honored by NYFA last year at its annual Hall of Fame benefit in recognition of his philanthropic work.

“I am honored to be joining the board of one of the leading arts service organizations in the country,” said Findlay. “At a time when government funding for the arts is under fire, artists in all disciplines need vital support now more than ever.”

NYFA’s Board Chair J. Whitney Stevens commented, “We are thrilled to have Michael on the NYFA board. He brings not only a wealth of experience, but a passion for and understanding of the needs of artists that is inspiring. I look forward to working with him as NYFA continues to find new ways to help artists realize their visions.”

Michael Findlay is a Director of Acquavella Galleries, which specializes in Impressionist and Modern European works of art and post-war American painting and sculpture. Born in Scotland in 1945 Mr. Findlay directed one of the first galleries in SoHo in the 1960s and established his own gallery there from 1969-1977. He was the first dealer in the United States to show the work of Joseph Beuys, Sean Scully and other European artists, and gave American artists such as John Baldessari, Hannah Wilke, Stephen Mueller and Billy Sullivan their first solo exhibitions in New York. From 1964 until 1984 Mr. Findlay bought and sold Impressionist and Twentieth century works of art on behalf of American and European private collectors, and secured early portrait commissions for Andy Warhol. In 1984 he joined the staff of Christie’s auction house and was head of the Impressionist and Modern paintings department until 1992, when he became International Director of Fine Arts and a member of Christie’s Board of Directors. He retired from Christie’s in 2000. His first book, “The Value of Art,” was published by Prestel Publishing in April, 2012 and has been translated into German, Spanish, Korean and Japanese.

The New York Foundation for the Arts (NYFA) was founded in 1971 to empower artists at critical stages in their creative lives. Each year we provide over $1 million in cash grants to individuals and small organizations. Artspire, our fiscal sponsorship program is the largest and most established in the country and helps artists and organizations raise and manage over $3.5 million annually. Our NYFA Learning programs provide thousands of artists with professional development training and our website, NYFA.org, received over 1.5 million unique visitors last year and has information about more than 11,000 opportunities and resources available to artists in all disciplines. After Hurricane Sandy, we launched an Emergency Relief Fund that awarded $1.6 million to over 400 artists working in all disciplines.