As next year’s race for Michael Grimm’s congressional seat heats up, the war of words has cooled a bit.

Six months ago, Mr. Grimm was blasting his Democratic challenger, Councilman Domenic Recchia, as a “pathetic political hack,” “complete empty suit” and “another hypocritical, career politician … void of an original thought,” but Mr. Grimm went with a tamer line of attack today.

In a statement sent out earlier this afternoon, Mr. Grimm called Mr. Recchia “phony baloney” while challenging him to speak out against President Barack Obama’s embattled health care legislation.

“It also begs the question, where is my phony baloney opponent on the issue?” Mr. Grimm asked. “Domenic Recchia has been parading around spewing out regurgitated DCCC talking points, telling people what they want to hear, instead of talking to the people of Staten Island and Brooklyn who are losing their coverage, doctors, and their businesses on account of Obamacare.”

Mr. Grimm, who has consistently hammered the controversial health care bill, also continued to slam the White House’s goals: “This Administration and the progressive left are completely misguided with Obamacare. They’re rearranging deck chairs as the Titanic is sinking – trying to make the ship look pretty, instead of getting people into lifeboats.”

Mr. Grimm occupies a competitive, Staten Island district and is a top target for Democratic strategists going into the 2014 elections.

“Michael Grimm’s childish name-calling behavior reflects the sad lack of leadership we have in Congress today and is exactly why people want change and someone to represent them who is focused on delivering commonsense solutions to our problems. Instead of voting over 40 times to repeal the Affordable Care Act, and sending us back to a time when insurance companies held all the cards and would deny people with pre-existing conditions coverage, let’s talk about how we can improve the law to work for everyone. Instead, of being the ‘Party of No’ that throws temper tantrums and uses insults from the 1950s, let’s talk about the future and what matters to New Yorkers like how we’re going to create jobs, offer comprehensive immigration reform, and end gun violence in this country.”

Updated (1:47 p.m.): With response from the Recchia campaign. 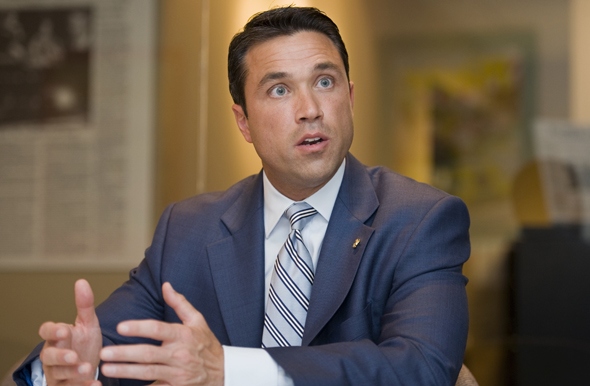